Sandeep Sinha- Cummins India Limited announced that Sandeep Sinha, Managing Director of Cummins India and Vice President of Cummins India ABO, has resigned to pursue business interests outside of Cummins. Sinha joined Cummins in 2004 as a Corporate Indirect Purchasing Manager. Over his career at Cummins, he held several leadership roles in Corporate Strategy in the USA, New & Recon Parts and Industrial Engine Business in India.

Harish Shriyan - Harish Shriyan, the CEO of advertising firm Omnicom Media Group India has stepped down from his role and will cease to work for the company by the end of this year. Shriyan was promoted to the post of Chief Executive in December 2017. Prior to that, he was working at the firm as Chief Operating Officer from 2013 to 2017. He joined the advertising firm in 2007.

Ankur Goel - Qlik announced the appointment of Ankur Goel as its Managing Director for India. Goel will be responsible for bolstering Qlik’s local operations and leveraging his expertise to drive stronger countrywide growth. He will report to Geoff Thomas, Qlik’s Regional Senior Vice President for the Asia Pacific region.

Meghna Apparao - Meghna Apparao has joined Godrej Consumer Products (GCPL)’s as the new Chief Marketing Officer. Prior to joining  Godrej, She was working with Amazon India as Director. She joined Amazon India as General Manager in the year 2015. She was responsible for overall P/L responsibility for the entire Beauty, Personal and Health Care Appliances categories - spans across consumer products, appliances, and devices.

Ashutosh Gupta - LinkedIn has named Ashutosh Gupta as Country Manager for India, effective from 2nd September, 2019. In addition to his country manager role, he will continue to lead the LMS Online Sales Organization for APAC and China.

Gupta has been associated with the U.S-based firm since 2013. In his first role at the firm he led LinkedIn’s Marketing Solutions (LMS) in India, where he scaled the enterprise business. Then later in 2016, he moved to Singapore to build LMS’s Online Sales Organisation (OSO) for Asia Pacific and China.

Jitendra Gupta - Jitendra Gupta, who had been leading PayU's credit business put in his papers last week and may start his own venture later in 2019. Pallav Jain, Country Head of PayU Finance, which runs the pay later product LazyPay, is expected to replace Gupta. He had joined PayU in 2016, when he, along with Co-Founder Amrish Rau at Citrus Pay, sold the company to PayU for $130 Mn in cash.

Venugopal Konchada- Retail chain 1-IndiaFamilyMart owned by Nysaa Retail Private Limited has appointed retail industry veteran Venugopal Konchada as Chief Operational Officer. The hiring is in line with the company’s plans for a rapid expansion where Venugopal will be overseeing the entire operational procedures in terms of retail, in-store opening, visual merchandising, business development and marketing.

Christian Juhl- GroupM, WPP’s media investment group, announced that Christian Juhl will become global CEO on October 1, 2019, succeeding Kelly Clark. Christian will be responsible for the vision, strategy and operational excellence of WPP’s media-focused companies. Christian is currently the Global CEO of Essence, a data and measurement-driven agency he joined in 2013. He led Essence’s acquisition by WPP in 2015, and since joining GroupM, Essence has grown exponentially in markets, clients and services.

Pankaj Jain- Online fashion platform LimeRoad has hired Pankaj Jain as its Chief Financial Officer. Pankaj joins LimeRoad after a nine-year stint as the CFO of the ibibo group. A seasoned and result-driven finance professional, Pankaj Jain will be responsible for driving rapid growth, improving efficiency and delivering profitability at LimeRoad. 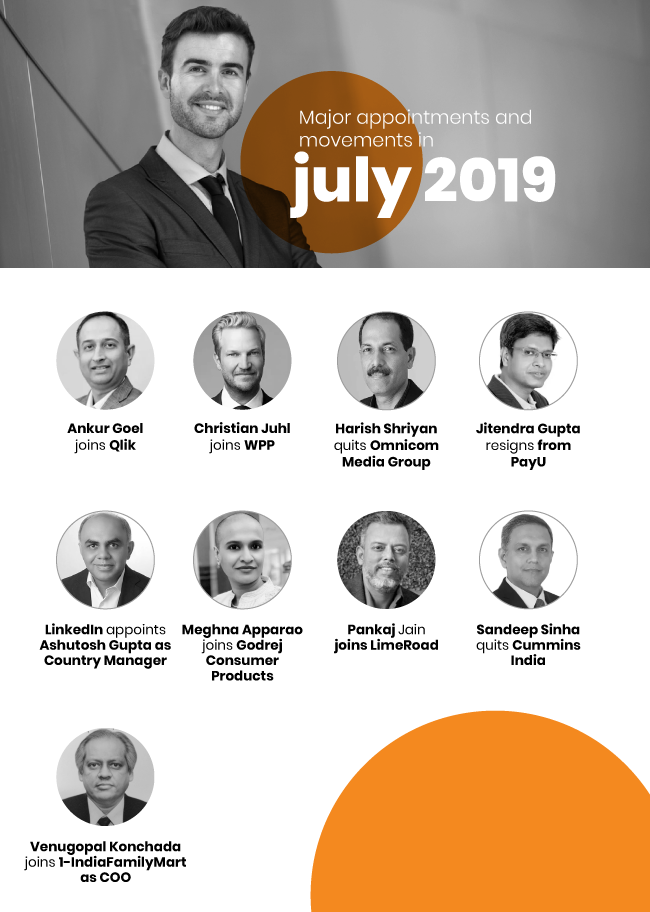