Article: Famous CEOs who quit in 2020

This pandemic was tough for everyone and nobody was prepared for this. It was a troubling time for the employees, people managers, and especially the leaders. They were taken aback by this crisis and had to overcome all the huddles with flying colors. But during this pandemic, many top-level executives stepped down from their roles.

Some of the industry leaders took bold decisions to step down from their current role and some of them decided not to let go of this crisis as waste and started their entrepreneurial journey. In this article, you will read about the famous CEOs across the industries who have quit their jobs this year.

International Business Machines Corp or famously known as IBM’s   Chief Executive Ginni Rometty stepped down in January. She is succeeded by Arvind Krishna, who heads the company’s cloud and cognitive-software division. Rometty retired from IBM after 40 years. She became IBM’s first female CEO in 2012 and had bet the company’s future on the market for a hybrid cloud.  Ginni also established IBM as the model of responsible stewardship in the digital age. She was the industry’s leading voice on technology ethics and data stewardship, working relentlessly to safely usher new technologies into society.

One of the oldest leaders at Walt Disney Company, Bob Iger decided to step down from his role of CEO in February this year. Iger shared that with the successful launch of Disney's direct-to-consumer businesses and the integration of Twenty-First Century Fox well underway, he believed it was optimal time to transition to a new CEO.

Iger was associated with the company for the longest of time and has played a crucial role in its growth. He had succeeded Michael Eisner as CEO in 2005. During his tenure, he oversaw the acquisition of Marvel Studios, Pixar, and Lucasfilm, all of which produced films that shattered box office records. It was under his leadership that 21st Century Fox came into Disney's fold, resulting in a new roster of intellectual property for the nearly 100-year-old company.

After working with the company for 11 years, Jeff Weiner has stepped down from his role in February.  He moved into the position of executive chairman within the company. His successor is Ryan Roslansky, former senior vice president of product. Roslansky assumed his position as CEO on June 1. Under his leadership, the company has grown from 338 to more than 16,000 employees in over 30 offices around the world, the membership base has increased from 33 million to nearly 675 million members, while revenue has increased from $78 Mn to more than $7.5 Bn in the trailing twelve months. Jeff guided LinkedIn through its IPO in 2011 and the acquisition by Microsoft in 2016.

In February, Salesforce announced that Keith Block has stepped down as co-CEO of Salesforce and Marc Benioff is Chair and CEO of the company. Block remained as an advisor to the CEO.  Block stepped into the co-CEO role in 2018, after a long career at the company that saw him becoming vice chairman, president and director before he took the CEO’s position. Sharing his stint with the company, he said it was a fantastic run he is ready for the next chapter and will stay close to the company as an advisor.

Sudhanshu Vats, Group Chief Executive Officer and Managing Director of media and entertainment conglomerate Viacom18, a subsidiary of Network18 quit the company after a stint of eight years and joined Essel Propack, a packaging manufacturer of laminated plastic tubes for the FMCG and Pharma space. In his tenure, Vats has helped expand the media network’s footprint into new business lines of digital, experiential entertainment, and consumer products.

Abidali Z Neemuchwala quit as the Chief Executive Officer and Managing Director of Wipro. Neemuchwala left due to family commitments. He joined Wipro in April 2015 as the President and Chief Operating Officer, after having served at larger rival Tata Consultancy Services. Neemuchwala was made CEO the following year and took on the additional role of managing director in 2019 when billionaire and philanthropist Azim Premji step down as the company’s chairman and his son Rishad Premji was appointed in his place.

One of the most prominent people in the Indian media and entertainment industry, Uday Shankar steps down from his role as President, Walt Disney Company (APAC), Star & Disney India. Shankar will be associated with The Walt Disney Company till December 31, 2020. Shankar is working closely with Campbell to identify his successor to ensure a smooth transition.

Shankar has been associated with Star since 2007, under his leadership Star India reached at its peak and witnessed tremendous growth in revenue and viewership. Shankar launched Pro Kabaddi in India and is also responsible for getting the media rights for IPL.

After working with Mastercard for more than a decade, Ajay Banga will step down at the beginning of next year. The current Chief Product Officer Michael Miebach will take over from Banga. He proved instrumental for the company when he took over the reins in the aftermath of the 2008-09 financial crisis and has been witness to Mastercard’s revenue tripling during his tenure as the e-commerce sector also flourished across the globe.

Harley-Davidson CEO and President Matthew Levatich stepped down in March this year, ending a five-year tenure during which the company’s performance continued to slide. In 2019, the motorcycle maker’s global sales had hit a 10-year low, pulled down by an aging target market and changing demographics and lifestyles.

Levatich started his journey with the company in 1994, served in various positions across the US and Europe, was appointed CEO in May 2015 with the expectation that he would be able to turn around the brand’s falling appeal. He set the target of attracting 2 million new riders over the next decade and introduced initiatives such as the “More Roads to Harley-Davidson” strategy to make the brand more appealing to a wider audience.

In the midst of an $11 billion restructuring plan that failed to impress investors, Jim Hackett, unexpectedly decided to retire from his role as CEO and President, Ford Motor Company.

Hackett previously had not expressed any interest in retiring. In February, amid an executive shakeup, he said, "I plan on staying in this job.” Amid the pandemic he has been appreciated for the way he has streamlined the automaker's operations, forming a global partnership with Volkswagen. Hackett also shifted the company's product portfolio away from passenger cars, among other internal actions. 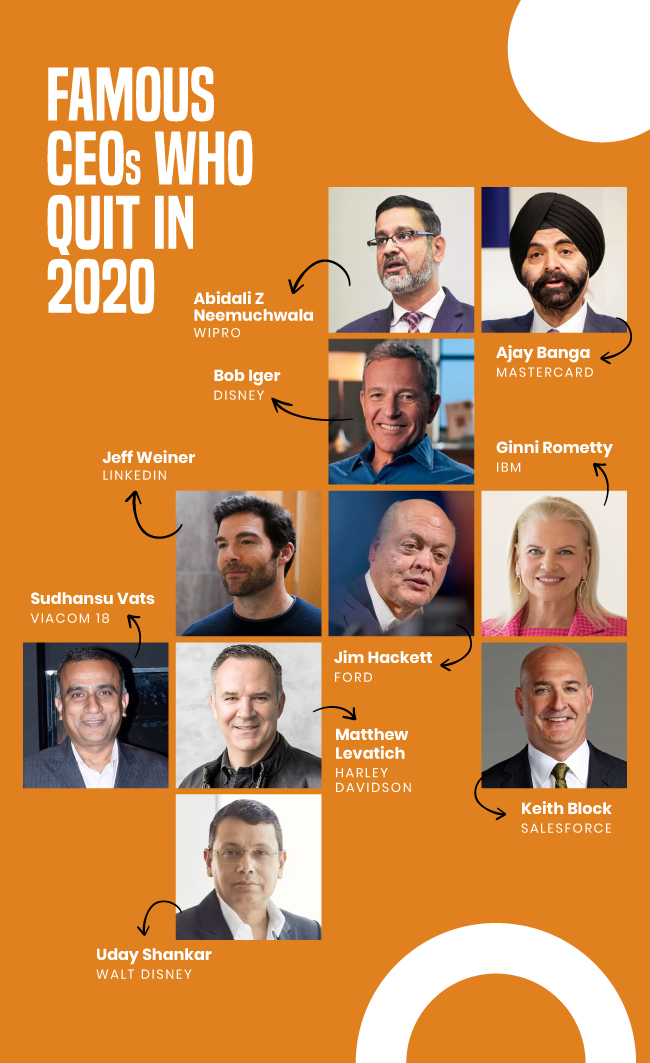