The last three months have been quite tough on jobs across the globe. We have seen multiple senior leadership exits across the industry and despite the pandemic, there have been some major appointments of CEOs, COOs, and MDs. Some moved to a new organization, some of them got elevated while others headed toward the entrepreneurial route.

Shrikant Madhav: Shrikant Madhav Vaidya has been appointed the Chairman to drive India’s largest state-run oil refiner and fuel retailer, Indian Oil. A chemical engineer from the National Institute of Technology, Rourkela, Vaidya has 33 years of experience in refining and petrochemical operations. Vaidya will be the second refinery expert to head the company after Singh, who was director (refineries) before being elevated to his present post. Vaidya had joined the IOC board in October as director (refineries) and will superannuate in August 2023.

Sudhanshu Vats: The Group Chief Executive Officer and Managing Director of media and entertainment conglomerate Viacom18, a subsidiary of Network18. Vats decided to quit the company after a stint of eight years to join Essel Propack, a packaging manufacturer of laminated plastic tubes for the FMCG and Pharma space. He has also been appointed as an additional director of the company effective from 16 April 2020. In his new role at Essel Propack, he has also been designated as key managerial personnel pursuant to the Companies Act 2013.

Rahul Jaimini:  This is not a goodbye, it's more of a thank you,” wrote Rahul Jaimini, Swiggy’s co-founder. “After being a part of the founding team and the close family we've all become over these past 6 years, it's time for me to take up a new challenge,” he added. At Swiggy Jaimini was leading functions including platform engineering, analytics, IT, and Swiggy Labs. These will now report to Dale Vaz, the head of engineering and data science. While Jaimini will no longer be involved in day-to-day responsibilities at Swiggy, he will continue to be a board member and a shareholder at the company.

Mahesh Babu: Mahindra Electric has elevated Mahesh Babu as Managing Director of the company. The appointment was approved by the board of directors in a board meeting scheduled on May 6th, 2020. Mahesh, who was the CEO took charge as the role of MD and CEO from May 7th, 2020. He has played a key role in the production version of MESMA 350 EV platform and in-house development of electric three-wheelers and four-wheelers. Mahesh has been with the Mahindra Group for over 20 years and has worked in the design and development of engine and vehicle platforms from frugal 3-wheelers to flagship models.

Aiman Ezzat: Aiman Ezzat has succeeded Paul Hermelin as Capgemini’s new CEO. Paul will continue to be the Chairman of the Board. During his tenure as Chief Operating Officer (from January 1, 2018 to May 2020) and prior to this as Chief Financial Officer, Aiman reinforced both the Group’s position as a global leader as well as its financial resilience. He also played an instrumental role in the implementation of the Group’s new operating model.

Pradeep Parameswaran: He has been serving as the President of Uber India and South Asia and managing India, Bangladesh, Sri Lanka markets. The ride-hailing firm expanded his responsibilities and elevated him to the position of Regional General Manager for the Asia Pacific. "After capably leading our India and South Asia business since 2018, I know that he will continue to inspire Uber's next phase of growth across this key region," said Uber Senior Vice President of Mobility and Business Operations, Andrew Macdonald.

Sandeep Mahajan: Tyre maker Goodyear has appointed Sandeep Mahajan as the Managing Director of India operations. He has been appointed for a period of five years or up to the date of superannuation or retirement, the company said. Mahajan succeeds Rajeev Anand, who is superannuating from the company after completing more than 38 years of service. 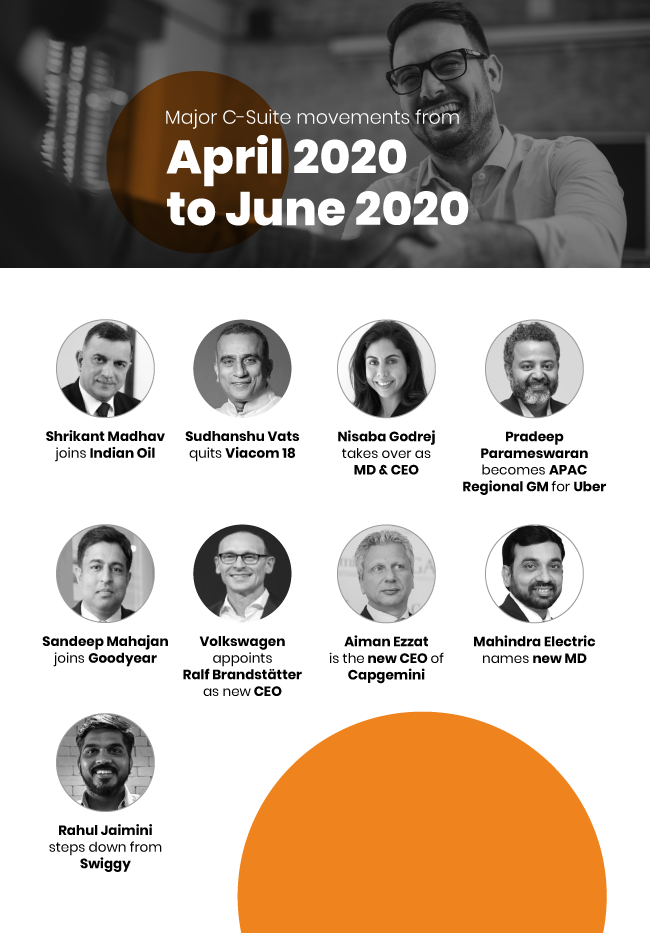 Abid is working as an Associate-Editor with People Matters. You can reach him at abid.hasan@peoplematters.in or contact him at +918010998491
NEXT STORY: How DCB Bank is battling COVID-19 with digital innovation

We reward our people based on business results, their commitment to innovation: IBM’s Andrew Campbell

Employers should also think about flexibility as a form of reward: Rhiannon Staples, Hibob