We have just completed the fourth quarter of the financial year 2018-19 and also stepped into the new financial year with high hopes from the industry. The fourth quarter of the fiscal year 2018-19 witnessed some significant HR movements in the domain, and industry leaders from top to mid-level shifted their companies, some got elevated, and few of them got kicked up. In this piece, we highlight some of the significant movements which took place from January 2019 to March 2019.

Jayant Kumar- Tata Power Ltd’s Chief Human Resources Officer Jayant Kumar stepped down, citing personal reasons. Commenting about this development in the media the company said the post is being filled by Himal Tewari, the current Vice-President for group HR at Tata Sons.

Arif Aziz- After working with the GE Group for more than eighteen years, Senior HR veteran Arif Aziz started his new innings with beverage alcohol company, Diageo India. He joined Diageo as Chief Human Resource Officer, and he is based out of Bengaluru, Karnataka.

Kabir Julka- American Express India announced the appointment of Kabir Julka as the Chief Human Resources Officer, India. In this role, Kabir took responsibility for the development and delivery of a business-focused HR strategy that attracts, develops, motivates, and retains American Express' employees.

Somraj Roy- Construction engineering company KEC International Ltd. appoints Somraj Samin Roy to lead its HR function as its previous Head of HR Vasudevan Narasimha quits. Vasudevan Narasimha stepped down from his position after working for the company for about 4.5 years.

Lisa Chang- Adding another senior industry veteran to their senior leadership, The Coca-Cola Company appointed Lisa Chang as the new Chief People Officer she is responsible for the company’s global human resources operations. Chang took charge from March 1, 2019, based at Coca-Cola headquarters in Atlanta, replacing Jennifer Mann, who now serves as president of Global Ventures for the company.

Dr. Shashank Teotia - Online fashion platform LimeRoad appointed Dr. Shashank Teotia as Senior VP for People and Talent Development. With his 15-years of experience in HR across sectors and regions including his invaluable work in organizational behavior and psychology, Dr. Teotia is an addition to the Core Management Team at LimeRoad.

Zeenat Burji - Magazine Publisher Condé Nast India appointed Zeenat Burji as the new HR Head. Before joining Conde Nast, Zeenat Burji was working with EY Perthenon as Head of HR. She has done her Masters with Honours in Human Resources Management from London. 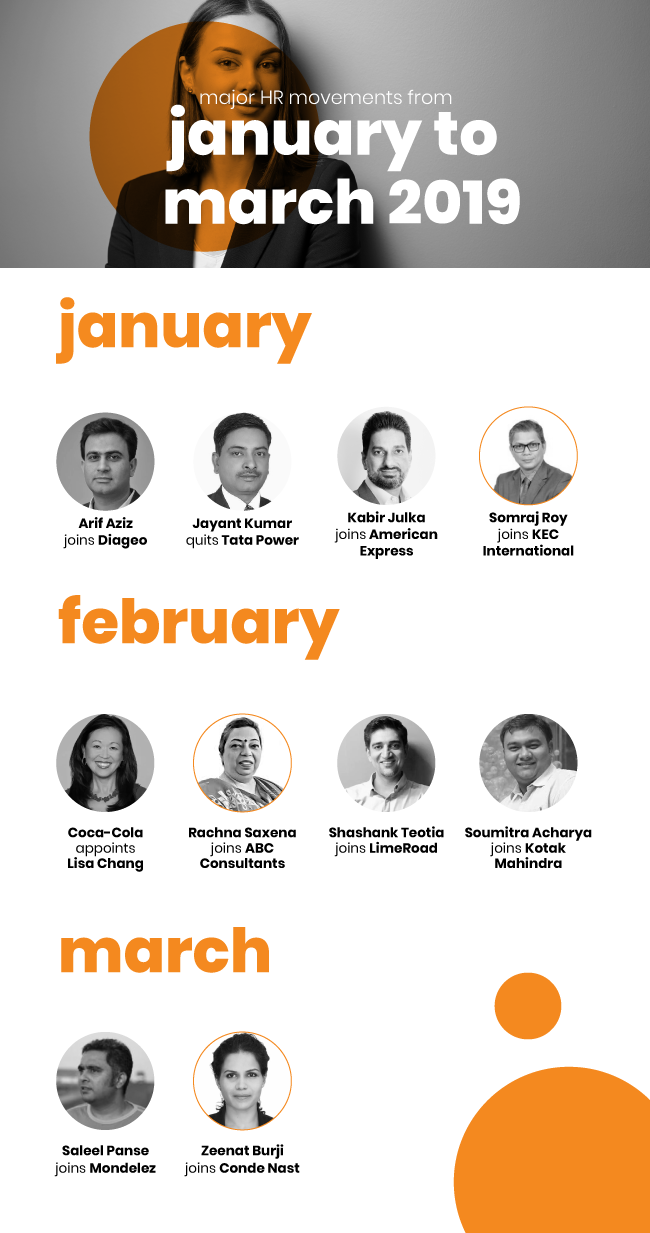