Not all employees trust their companies. Understandable and acceptable. It is impossible to please everybody. One in three employees doesn’t trust her companies. A cause of concern. It must ring alarm bells in employer camps. Consumer behavior is shaped by employees’ trust in employers. A big reason to worry. It must put the organization on high alert.

Edelman’s Trust Barometer Employee Engagement Study revealed this intriguing finding – it is not only alarming that a large proportion of employees do not trust their companies, the fact that disgruntled employees can directly impact customer trust in companies is a big reason to worry.

Trust in the employer gets weaker as we move down the hierarchy levels, the study notes. The trust index among executives is 64%. For mid-level management and low-level management, it is 60% and 55% respectively. Less than half of non-management employees, the trust index stands at 48% for non-managers, entry-level and self-employed individuals on an average.

Customers’ trust in a company is affected by multiple variables. The most significant of all of them are: 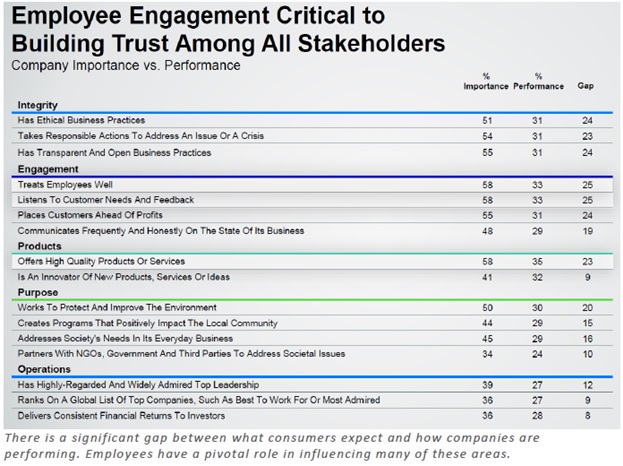 The reasons behind employee mistrust are rooted in the workplace culture and how they are treated. Consumers’ trust in a company relies on the way the company treats its employees. A lack of trust in an organization can significantly impact its consumers’ purchasing behavior, causing ripples in the company’s P&L statements. Thus, trust issues in employees do not necessarily impact the employee (and eventually) the company’s productivity, they can also lead to a direct impact on consumer buying behavior.

If consumer buying decisions are being driven by how employees are being treated in the company, it becomes all the more important for organizations to create a culture of trust at their workplace.

It isn’t anymore the case of a disgruntled employee whispering in your ear about the unhygienic practices of the hotel that will sway your decision to stay in the hotel. The same employee now has the world to vent to on the internet, and (s)he doesn’t even have to risk his identity. If you break an employee’s trust and decide to coerce him into resigning and don’t handle the conversation properly; in this day and age, the employee can record that conversation, post it on Facebook, and the whole world can form opinions about the company’s practices. Not always does the Chairman come out and condone the company’s behavior, but sometimes even that may also not be enough to preserve/revive consumer’s trust. It is too soon to predict any fallout from a consumer standpoint in the TechMahindra case – but certainly, the company has lost brand image in the worldview to an extent as an immediate aftermath.

Employees are regarded as trusted spokespersons of the organization. According to the study, it is the non-management employees who are the most trusted advocates of a company. Consumers trust them more than their executive counterparts for information on company’s financial earnings, business practices, and treatment of employees and customers. On Social Media as well, it is the employees of a company who are more trusted, even more than a company CEO. 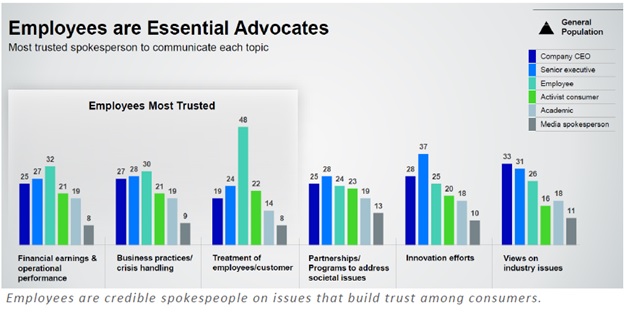 A case in point – Uber

The workplace culture, HR practices, and employee treatment at Uber has been in question for a certain time. At the start of the year, there had been reports of groping of female employees by a manager at a company retreat in Vegas, a manager threatening to bash an underperforming employee’s head, usage of homophobic slurs by a Director and so on. While all these were anonymous revelations reported by the New York Times, an ex-Uber engineer, Susan Fowler wrote a blog post shedding light on her story at Uber and it has cast a deep shadow on the company culture. Travis Kalanick eventually stepped down.

This mistrust in employees has resonated in consumers’ perception as well. A #DeleteUber campaign has been the public’s trigger movement. While a combination of factors may be responsible for the public agony, but one of the major reasons was the workplace culture and employee treatment. Resultantly, Lyft saw more downloads than Uber in January (albeit this happened before the Susan Fowler blog, but a large part of the reason can be owed to the company culture, behavior towards drivers, and all of it compounded by the surge pricing controversy). Latest data (calculated after the numerous scandals which have clouded Uber) reveals a jump in consumer spending on Lyft rides, which is significantly more compared to Uber. 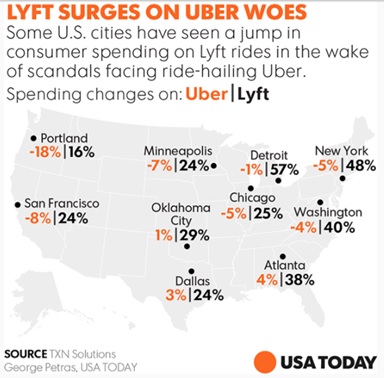 Clearly, Uber’s mistreatment of employees has had a ripple effect on consumer behavior, which has eventually impacted the business of the world’s most valuable startup.

The recent cases at TechMahindra and Uber are significant examples of how mistreatment of employees and a loss of trust in a company can negatively impact consumer perception, and eventually the business. Hence, for businesses, it is important to earn employee trust if they are to earn consumer trust.

The editorial team at People Matters has features writers, researchers and content experts with rich domain knowledge. We endeavour to create an impact on the HR community through thought-provoking and futuristic content.
NEXT STORY: It is time for HR and payroll automation to take over
Also Read: People-centric employer brand is a key business driver: Naveen Kumar, HR Head, Licious
Also Read: Tata Communications' Aadesh Goyal on engaging people and investing with them

Tata Communications' Aadesh Goyal on engaging people and investing with them