Article: Micro behaviors you need to practice in a multicultural organization

Growth in a diverse cultural environment is essential to become a global citizen. Not mere survival, but thriving of the business is dependent on employees working with a global mindset. Below, we shall first examine the challenges in cultural interactions and then, look at the TREE analogy to experience a culturally transformational one.

The wider the difference in the visible elements between two cultures, the greater is the likelihood of culture shock. Here, the differences perceived are too overwhelming for the person and leave little energy to explore the elements that are invisible. Also, if the magnitude of differences is perceived to be large in the visible part of the culture, then it is likely to apply for the invisible part. Some elements of culture are so crucial that the rest of the understanding depends on it as in the case of language. In fact, the language barrier in the field of health is one of the reasons for slow treatment procedures. This involves diagnosis, administration, encouraging adherence and follow-ups. In cases where limited experience or knowledge results in either an inferiority or superiority complex, one should expect more stumbling blocks in exploring other cultures.

The ability to move beyond the visible differences is critical to cultural understanding. People engage at different levels of interactions and they bring out results in different sets of outcomes.

“Micro behaviors are the subtle, small instances that have a great impact on people’s feelings of either being happy and content or hurt and unhappy. Hence, there is need to exercise care in what one says, the tone used, what one jokes about and the body language in everyday interactions with people.”

Three levels of interactions are identified based on the point of focus in the TREE model. 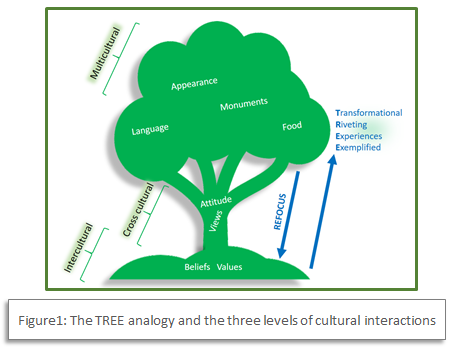 In multi-cultural environments, people are likely to focus on the visible elements of culture. There are attempts to come together to celebrate each other’s festivals with the demarcation between us and them lurking behind. By and large, the interactions are rare. Hence, it is considered a superficial attempt to understand cultural elements. In the TREE analogy, it is the focus on the leaves, fruits, and the flowers. The celebrations or the rare interactions are likened to sprinkling water on them. Then, the tree may not grow to its fullest potential.

In a cross-culture environment, an attempt is made to understand the cultures, chiefly through differences. Cultural continuums are used to place cultures at different points with comparisons and value judgments lurking behind. Small changes in adaptive behaviors could occur during inter-cultural interactions. It is likened to the trunk and the branches and nurturing them could bring small changes.

In inter-cultural environments, people have more meaningful conversations on elements of culture that are beneath the surface, deeper in the roots. Such deeper conversations that are characterized by a genuine desire to learn about and learn from each other are called inter-cultural dialogues. Some topics on which the dialogues occur are views on fate and destiny, change, taking risks, ways of raising children, treatment of equality-inequality, learning methods and education, family as an entity and knowing what affects their self-esteem and so on. These deeper conversations are like nurturing the roots of the tree. The outcome of these dialogues is often transformational. There is a significant difference between before and after the cultural dialogues. Perhaps an equivalent comparison can be drawn from the color spectrum- it is the difference between patches of the seven different colors and a rainbow. The rainbow looks fascinating as it has areas of merging in contrast to patches of seven colors, where each color remains distinct, making it look like a band of colors. Going back to the tree analogy, the flowers, leaves, and fruits get enriched and hence, what one sees is Transformational Riveting Experiences Exemplified.

It is imperative that people working in a diverse environment need to achieve TREE to become a global citizen. A quick way to show signs of becoming a global citizen is to focus on micro behaviors.

Focus on micro behaviors to get the TREE results:

Micro behaviors are the subtle, small instances that have a great impact on people’s feelings of either being happy and content or hurt and unhappy. Hence, there is need to exercise care in what one says, the tone used, what one jokes about and the body language in everyday interactions with people. So, modifying one’s micro behaviors in multicultural and cross-cultural interactions can quickly move one to having genuine intercultural dialogues which produces the TREE results and the individual becoming a global citizen.

Some micro behaviors that need to be practiced in cultural interactions:

1. Reflect- Be aware of your own strong beliefs and values that could hamper interactions with other cultures. First, identify whether you greet people differently, or whether you discuss more often with a few people and ignore others.

2. Identify Pride symbols- Every culture has its own symbols and icons and takes pride in these, and would like other cultures to appreciate them. Hence, avoid finding similarities and differences, as this will prevent identifying unique qualities of other cultures.

3. Appreciate-  Make a sincere attempt to identify a couple of things that you will appreciate in everyday conversations. It could be the flora and fauna of the country, a delicacy, or people’s enthusiastic way of greeting everyone in the morning.

4. Refocus- It is natural to notice the differences in appearances, attire and accents. The more the differences, the more you need to focus on the learning attitude. In the same way, avoid over the display of one’s own cultural symbols at least in initial interactions.

5. Accept- One needs to be comfortable with the realities/facts that do not project one’s culture in a favorable light. Avoid becoming defensive. Build emotional resilience when someone points a flaw in your culture.

6. Acculturation- Choose areas where you will genuinely adapt to the new culture and ensure they are manifested clearly in your interactions with other cultures. For instance, joining other cultures in their celebrations.

7. Use positive words- Ensure you use positive words while sharing information about your own culture and completely avoid using strong words, particularly I do not like statements.

8. Be respectful- Be sensitive to how different age groups, genders, and special groups are treated in different cultures.

9. Neutrality- In unfamiliar cultures, it is wise to stay neutral when faced with two groups arguing on a policy, beliefs or values of their own cultures.

10. Know your culture- Your credibility increases when you accurately describe the what, how and why of your culture’s beliefs and practices. So, do homework on your own culture.

Being thoughtful about these micro behaviors brings synergy in communities and workplaces. It ensures that people stay in the level of intercultural interactions which enables them to become global citizens. On the contrary, not being thoughtful produces inequities as reflected in stereotypes and discriminatory practices which exist subtly in multi-cultural and cross-cultural interactions. So, raise your curiosity level and enthusiasm and set on cultural journeys as passengers who are the global citizens

Employees want to see how the values shine through your brand: Porter’s Rizwan Khan