The anthropologist, Margaret Mead, once said “Small groups have changed the world. Indeed nothing else ever has.” And she is quite right. Look at all great organizations of today and yesterday — they all originated from the effective interaction of at least two people. Think about Steve Jobs and … Hewlett-Packard, Sergey Brin and Larry Page at Google. In our consulting practice, we often preach that effective change starts with the team that surrounds you. Obviously, individuals are important but don’t create the momentum, and the organization is too big, too abstract to get a handle on. But what do all these groups have in common? Although they are diverse and consist of complementary talents, they are inclusive and focused on the same tasks through exploiting a shared purpose.

In this world of ever-increasing diversity, teams are under new types of pressures. Different types of diversity are a blessing and a threat. Gender, generation, national culture, and discipline come together in teams as a new plague in disguise. What if young marketing females from Nigeria interact with older IT guys from Sweden? Good luck in finding out. We gave up. But there are some lessons we can learn from recent research. Let’s quote some.

The qualities of a leader, of the team, and the interaction between the team and the leader are the most important criteria for making or breaking the success of an organization. On both the subjects, many books are written, and rightly so. An original thinker on management teams, a British author and consultant, Meredith Belbin in his first book, Team Roles at Work, describes how the Apollo team of highly talented people achieved significantly less than a second team made up of much less gifted people but who cooperated infinitely better. For Belbin, an effective team is a group of people who aim for a shared goal and therefore go through a number of phases. After 40 years of research, he concludes that the effectiveness of a team is dependent on the fulfillment of nine complementary roles — Shaper, Implementer, Completer Finisher, Coordinator, Team Worker, Resource Investigator, Plant, Monitor evaluator, and Specialist. They don’t have to be there proportionally; nor does one individual need to play each of the roles since one person can incorporate different ones. And it is the coordinator that is in charge of finding synergies between the team roles.

While successful culture can look and feel like magic, the truth is that it’s not. Culture is a set of living relationships working towards a shared goal. It’s not something you are. It’s something you do

Di Stefano and Maznevski have developed a model, based on Mapping, Bridging, and Integrating (BMI) differences between diverse team members in order to enhance their performance. In the first Mapping phase, team members are encouraged to define the differences and similarities between the team members and how it may benefit team processes and performance. It ranges from differences in leadership style, personality, thinking style, gender, etc. During the second Bridging phase, there is a focus on the integrity of the communication process since many misunderstandings are caused by misinterpreting information by all parties involved. Understanding and a willingness to communicate from a neutral position can “bridge differences” and lead to positive decision-making. During the last phase of Integration, one assumes awareness of the differences and the importance of the communication bridges. Only then it is assumed that the team members can integrate the clear differences and work them to their advantage. This is done by keeping the differences intact and using them to achieve the similarities in goals. The organization can support this process by developing the right leaders who can guide this process effectively. An interesting finding in their research is if the leadership role is not done properly, the performance of a diverse team leads to lower than average performance. But when done properly it exceeds the performance of homogeneous teams.

Bridging differences is at the core of a team training program—the Architectural Conservation Program (ACP) and the program, through its pedagogy, has been able to help its participants better understand the differences between professionals (disciplines) involved in the field of conservation. 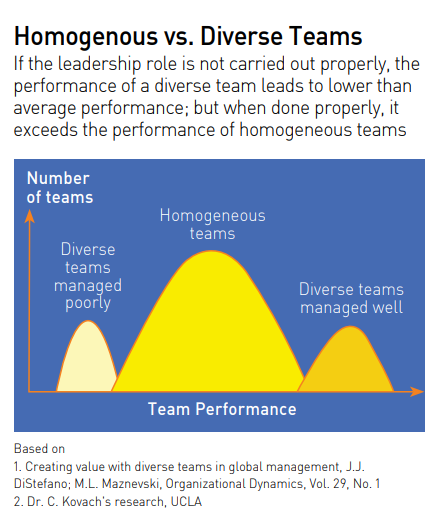 The authors argue that in teams comprising individuals from different countries, differences in values, norms of behavior and communication styles are a frequent source of irritation, misunderstandings, and conflict.  Some critics argue that this seems to suggest that the effects of cross-national diversity on team outcomes are stronger than for within-national diversity. They argue that there are several caveats to this argument. Some pointed out that intra-national variations can be as significant as those between members of different national cultures. Moreover, evidence suggests that some of the problems associated with cultural diversity may be amplified in a single-country context because they are less recognized intra-nationally. Applied to research on multicultural teams, these findings suggest that not only could intra-national teams have surface- or deep-level diversity as great as cross-national teams, they may face even greater barriers to effective collaboration by not recognizing that diversity in the first place.

The qualities of a leader, of the team, and the interaction between the team and the leader either makes or breaks the success of an organization

Recent research by Daniel Coyle, as published in Culture Code, reveals additional insights into what makes teams effective. In The Culture Code Daniel Coyle explores and concludes that “While successful culture can look and feel like magic, the truth is that it’s not. Culture is a set of living relationships working towards a shared goal. It’s not something you are. It’s something you do.”

At the beginning of this excellent book, Coyle relates the fascinating research story about four-person groups tasked to build the tallest possible structure using marshmallows, a yard each of string and transparent tape, and 20 uncooked spaghetti. Surprisingly counterintuitively, kindergarten teams dramatically and consistently outperformed groups of lawyers, CEOs, and business school students.

Business students prioritized “what psychologists call ‘status management’ — they are figuring out where they fit into the larger picture . . . their interactions appear smooth, but their underlying behaviors are riddled with inefficiency, hesitation, and subtle competition.” All of this distracts from the task at hand. By contrast, “the kindergarteners’ action appears disorganized on the surface, but when you view them as a single entity, their behaviors are efficient and effective. They are not competing for status. They stand shoulder to shoulder and work energetically together. They move quickly, spotting problems and offering help. They experiment, take risks, and notice outcomes, which guides that toward effective solutions.”

As Coyle observes, “The kindergarteners succeed not because they are smarter, but because they work together in a smarter way. They are tapping into a simple and powerful method in which a group of ordinary people can create a performance far beyond the sum of their parts.” In his discovery exploration, the author encounters individuals possessing “traits of warmth and curiosity…they were polite, reserved, and skilled listeners. They radiated a safe, nurturing vibe. They possess deep knowledge that spans domains . . . asking questions . . . ignited motivation and ideas.” And obviously, with a closer look at the main points made above, there are lessons to be learned. And can we formulate them as dilemmas that need to be reconciled?

Build safety—“explores how signals of connection generate bonds of belonging and identity.”

While addressing big ideas, Daniel Coyle personalizes his narrative, describing how leaders of effective groups seek opportunities to use and model the key behaviors. They begin to treat their leadership role as that of a culture broadcaster. He explains: “You have priorities, whether you name them or not. If you want to grow, you’d better name them and you’d better name the behaviors that support the priorities.” And all this might be supported by catch phrases conveying the essential cultural ambiance:

“What were our intended results?

“What were our actual results?

“What caused our results?

“What would we do the same next time?

“What will we do differently?”

Another striking example was given about the re-living of the Credo of Johnson and Johnson. It shows the importance of a shared purpose manifesting particularly in case of a crisis, like the Tylenol crisis at J&J. The organization outperformed itself because it had a deep beacon to go for far beyond their ambitious business goals. They were there first for the patients, doctors, hospitals, and society at large and then they celebrated good financial results for their shareholders, who came last in the list.

Differences vs. Similarities (Diversity vs. Inclusion)

It is very clear that high performing teams know exactly what they share in terms of tasks/roles and values, are free to be different in the ways, and express it in behaviors. They standardize things but allow themselves to deviate in case innovation is at stake. In that way, high performing teams take advantage of the differences of their members in all aspects and include them by sharing values and tasks.

Humility and will power

It is a shared conclusion that the leadership of teams are often invisible and loaded with humility. Team leaders listen more than talk but are unprecedented in their will to get to the goals that are laid down by its members. It is a servant leadership of the highest level.

It is commonly shared that high performing teams know what is exactly needed to keep as constant in order to allow for change. Values and behaviors are often quoted as they are expressed in catchphrases, allowing individual team members to find their own paths of change within the stable and enduring framework.

The work of Jim Collins in his seminal work Good to Great was again leading in high performing teams. It became clear in the other research done in this area that for a team to be high performing, it should both have a succinct and ambitious picture of where they are going for.

Fons Trompenaars is a Dutch-French organizational theorist, management consultant, and authorin the field of cross-cultural communication, who developed the 7Dimension of Culture model forlooking at national culture differences.
NEXT STORY: GDPR: Here’s what you need to know about its impact on HR
Also Read: Zoom into the roadblocks and zoom out to explore the possibilities at People Matters TechHR India 2022
Also Read: Inside a tech giant’s family-friendly work culture