What began as the Mavalli Tiffin Room (commonly known as MTR) restaurant in Bangalore in 1924 by Yagnanarayana Maiya, is now a company famously known for its range of packaged foods including breakfast mixes, ready to eat meals, spices, snacks and beverages.

Being an almost century-old company, MTR Foods has embraced cultural changes over generations and created an inclusive culture that has made their employees the key propagators of the company as a Great Place to Work. But this journey filled with changes and disruptions in terms of culture, people, thoughts and technology has not been easy.

In an interaction with People Matters, Tuhin Biswas, Chief People Officer, MTR Foods shared the transformational journey of the company from a small South Karnataka-based organization to becoming a Multi-national company and talked about the talent challenges it involved.

Here is an excerpt from the interview:

From starting as a restaurant in 1924 to getting acquired by Orkla Group in 2007, how has the culture of MTR Foods transformed in these years?

Almost 10 years back, MTR’s talent and culture was roughly divided into three different categories. Category one included the people and the staff that had been associated with the company for a long time. They had their own ideas, perceptions and hence, a culture which only they could relate to. The second set of people comprised of the employees who had although spent only about 4 to 5 years with the company, but were now used to the existing culture. The third category of talent, however, was new to the company and brought in different perspectives to the business. MTR witnessed a lot of appointments in 2009, including the appointment of Sanjay Sharma, CEO, MTR Foods. All these new people on the team wished to do things differently.

The non-alignment of the different buckets and generations of talent was primarily caused by the absence of a strong long-term vision and well-defined strategy that could define the culture of MTR Foods.

How did you break the silos and built a uniform well-defined culture shared by all the employees at MTR Foods?

With the same old products and a steady growth rate, the company and leaders were in a happy and comfortable place. It worked well because the market was not that competitive then. But as things started changing, with so much competition coming in, it was critical to rethink our business strategy and put stronger systems and teams in place.

But before doing that, it was necessary that we break the silos and promote a culture of openness. Openness among employees was very rare and there was a lot of trust deficit. Also, there was no performance management system in place and appraisals, rewards and recognitions were not transparent. Everything was perception-based and not data oriented. Multi-layered structures and 14-15 levels in the organization made it even more confusing. The unions were also rigid and had no confidence in the management because of lack of communication.

We clustered and categorized all these critical challenges and put them into 4 different buckets – Define long-term Strategy, Talent Development, Conducive IR and Culture Development. After identifying and defining 4 key areas we started working on each of them. 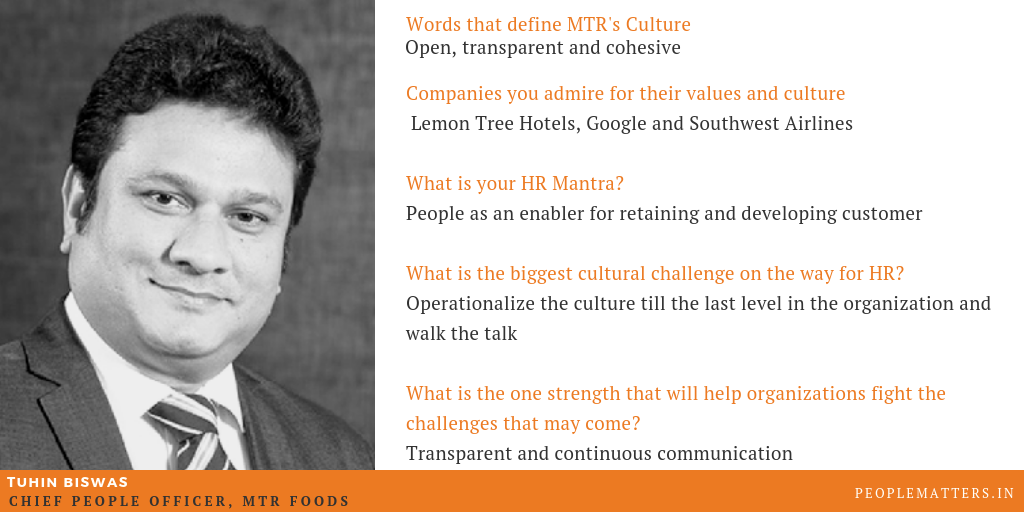 How have you been able to interlock culture with the company’s goals, roles, processes, values, communications practices and attitudes?

For instance, to define long-term strategy, we came out with something called VMV (Vision Mission Values) rollout, which we built with the help of a consulting firm. While working on the strategy, we also kickstarted our mission to create an inclusive culture simultaneously, as we brought together about 40 managers of the company for a 2-day workshop to brainstorm and understand what exactly should be our vision mission and values and what should be our strategy. We identified 5 values – openness, excellence, inclusiveness, passion and one more, which we changed later on.

After identifying the values and developing the vision statement, it was now important to also roll it out effectively. Instead of going the traditional way of sending invitations we made the announcement through a drummer in a typical South Indian style and created a lot of buzz within the departments. The entire vision statement was then communicated and presented in a story format.

The second step was to redefine the organizational structure. Therefore, we did structure assessment and design and departmentalized the organization into different clusters as per functions, which didn’t exist earlier.

Then we came out with a compensation and benefits plan and a performance management system. We also developed MTR learning calendar based on the MTR values, as they form the core of our vision and mission.

It was a long journey of transformation from 2009 to 2018 and now, we are stronger as an organization because of a cohesive working environment.

Today the employees at MTR are happy and engaged to work here because they think they are recognized and cared for in the organization. Happy employees have in return helped us stay ahead of the curve and fight the competition that keeps on rising every day.

Drishti Pant is Assistant Manager - Content with People Matters. You can reach her at drishti.pant@gopeoplematters.com
NEXT STORY: Top 5 things you must know about today’s busy and tech savvy modern learners

Soliciting diversity, Inclusion, and belonging in the workplace

The economic crisis for HR Managers during COVID-19

Leader, are you listening?

Digital Nomads- boon or a bane for organizations?

Soliciting diversity, Inclusion, and belonging in the workplace

International flights to resume in India by 2021 end

How COVID-19 has created ‘the great epiphany’ on skills