Article: Of Millennials and Myths

Picture a ‘millennial’ at work. What do you see? A 20-something boy with long hair, wearing jeans, t-shirt and sneakers, maybe even sporting a tattoo or a ‘man-bun’; or a 20-something girl with streaks, wearing tattered jeans and slippers to work?

A quick Google Image Search of “Millennials” reinforces this stereotype – to an extent. The Google Search doesn’t return photographs of a 35-year regular old office going Joe; when even that regular Joe is a millennial. This may distort your stereotypical image of millennials, but 35-year-olds are millennials too. Universally accepted definitions classify people born between 1980 and 1994 as Gen Y (Gen Y and Gen Z are together termed loosely as millennials). A stereotypical perception of a ‘millennial’ doesn’t allow people to put the face of an almost-40-year-old face to a millennial, among other things. These other things constitute the staunch generalizations that a majority in the population have tied down to all the millennials. ‘Entitled, highly self-absorbed, and even narcissist’, are common characteristics that people end up associating to the Gen Y & Gen Z.

That’s how perceptions and stereotypes work. Once naturalized in the system, generalizations follow. Since the turn of the decade, discussions (read stereotyping) around millennials have continued to happen by people of all generations. Funnily enough, some of the critics fail to realize they are millennials themselves and are making generalizations about themselves!

Some of the stereotypes have been good, some bad, and some really ugly.

Next, they deployed a forced-choice survey to 298 participants to select what was their closest definition of meaningful work from a set of options.

The study resulted in an interesting set of findings:

The first study done on a small sample size involving 5 representatives each from every generation highlighted all of them talking about how much they value meaningful work. The way they expressed it was different, for sure; but the common pattern that emerged showed all of them valuing meaningful work.

To make assertions over the hypothesis that each generation cohort defines meaningful work differently, the researchers did a second study (see research methodology for details), and found that almost everybody defined meaningful work similarly. All generations prioritized items that revolved around ‘intrinsic motivation’ in their definitions. Items related to having good relationships with co-workers were chosen as least important to their definition. This implied that the definition of meaningful work also happens to be similar across generations.

What really was clouding the judgement of the ‘other’ generations was their perception of others. Every generational cohort had negative stereotypes about the others, perceiving that the latter “work only for money, don’t work hard, and don’t care for meaning”. Such stereotypes, the researcher writes, “(are) likely (to) cause conflict among generational cohorts, which may affect performance, commitment, and job satisfaction.”

Humans find stereotypes too psychologically tempting to avoid, even if some of us know they are wrong[i]. A tempting proposition that certain humans have missed out on avoiding is stereotyping other generations. The commonalities in the perceptions associated with Generation Y and Generation Z today, are not very different from the perceptions that were associated with Generation X when they were the same age as Gen Z is today.

See this collage of magazine covers from different eras: 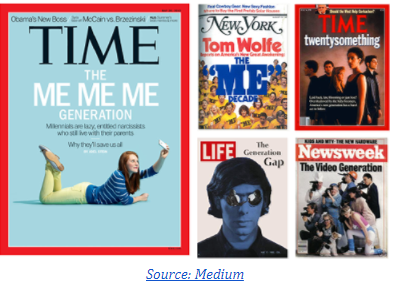 Perceptions, negative perceptions, are thus formed about other generations. The underlined word is perceptions – because they aren’t always true, rather shaped by certain stereotypes. For instance, a study done on millennials by the US Chamber of commerce in 2015 found that 3 in 4 millennials say work-life balance drives their career choices and emphasized flex-time as one way to do it. What might be interesting to note is what happens if this study is extended to all generation cohorts. How many would say no to having flexibility at work or having a work-life balance? Such arguments around flexibility arise due to the changing nature of work, not the changing age of the workforce. Had the infrastructure for remote work existed in the 1970s, Baby Boomers would have enjoyed flexibility at work as well. The reason flexibility at work didn’t exist 4 decades ago is that Steve Jobs and Bill Gates were children and trying to invent personal computers and operating systems, and the employees could not wrap their work in silicon disks and carry it home in laptop bags. Today, every generation demands flexibility, not just millennials[ii], because the infrastructure allows it.

It is the acceptance that different generation cohorts come from different social constructs will make a workplace devoid of gender stereotypes – something which every generation faces today.

DEIB must be central to every decision made, every opportunity offered, and every project completed: Degreed’s Susie Lee

For inclusion to work, it needs to become a leader’s agenda: CEO, NASSCOM Foundation