On September 6, 2018, the LGBT+ population in India and their allies found a new hope for the community to tear down the walls curtailing visibility, access, and growth towards a progressive future. With Sec 377 being read down, the queer community found the legal support it needed for a status of equity in the society, and thereby at the workplace. More than three years since the much celebrated verdict, have they really though?

Despite legal support and efforts made to counter discrimination and bias against LGBT+ talent, significant gaps continue to exist. Beyond discrimination, the existence of phobia against the queer community is costing countries and companies not in just terms of culture, but also economic losses.

According to a 2016 World Bank report, persistent homophobia and transphobia cost the Indian economy losses worth $32 Bn in GDP. Another study by Out Now Consulting, found that the US economy could save $9 Bn annually if organisations were more effective at implementing diversity and inclusion policies for LGBT staff.

Here is a snapshot from the World Bank’s report on the ‘Economic Cost of Homophobia & the exclusion of LGBT people: A case study of India’, highlighting the individual-level and economy-level outcomes. 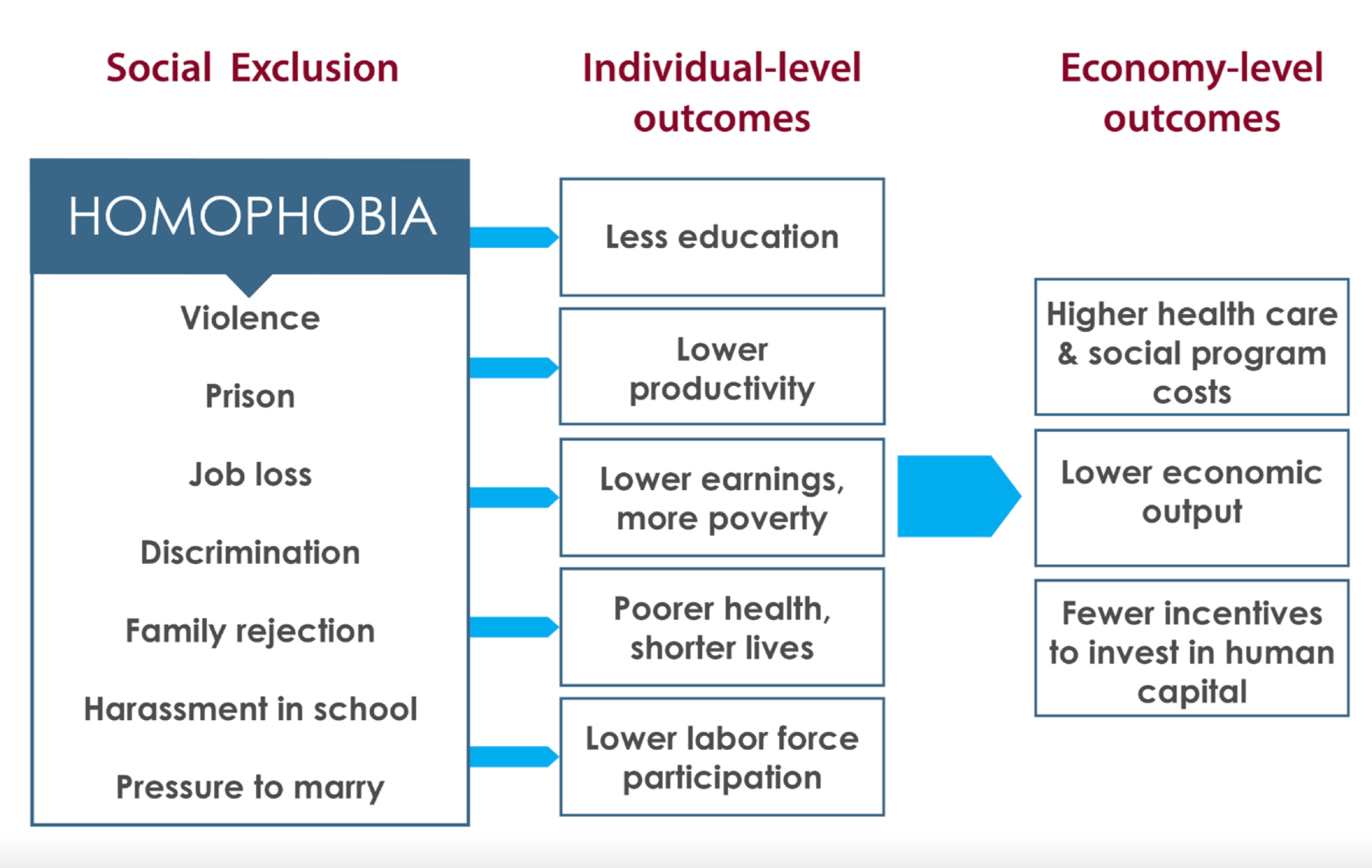 India isn’t the only country lagging in translating the legal verdict into onground acceptance and progress. Despite the intense focus on LGBT+ inclusion, in SouthEast Asia, Thailand is the only country that has instituted Anti-discrimination laws concerning sexual orientation, with certain sections of Indonesia and Philippines too moving the needle on legal protection of all genders.

For many countries, laws and bills have been proposed, however prolonged discussions and approvals continue to delay inclusion.

With May 17th observed as the International Day Against Homophobia, Biphobia and Transphobia, we shed some light on what the judicial system says, what organisations commit and communicate, and what queer employees experience on the ground.

The role of organisations in eliminating homophobia, biphobia and transphobia

While the majority of the human race continues to battle with coming to terms with equity for all - owing to years of rigid and biased psychological conditioning - this challenge poses a consequent phobia for those from queer communities to be able to authentically be themselves at work and in the society at large.

“When the Supreme Court delivered a landmark judgement decriminalising homosexuality on September 6, 2018, we, as members of the LGBTQ community, felt hopeful that it would soon end the harassment and discrimination that we have been facing over the years,” said Parmesh Shahani, DEI consultant and author of the 2021 CK Prahalad Business Book of the Year Queeristan in an article.

“In the process of empowering the LGBTQ community, corporate India has a major role to play, especially in terms of offering a dignified form of employment and ensuring the community is not discriminated against in the workplace. While prominent people, including corporates, spoke in favour of the ruling, there is a need to assess the actual efforts being taken by organisations to make workplaces inclusive. Mere tokenism is not enough,” Shahani added.

For a deeper insight into what a dignified form of employment encompasses for queer talent, People Matters reached out to Aparna Mittal, a leading Equality, Diversity & Inclusion Advisor, and corporate lawyer with over 18 years of experience. Mittal is also the Founder of Samāna Centre for Gender, Policy and Law, a leading consultancy in this space.

“To focus on substantive progressive change that reaches every employee and every corner of the office, practice zero tolerance of any discrimination or harassment meted out to the LGBTQ community, commit as an approachable and reliable ally, and most importantly stay away from lip service or pink washing,” said Mittal.

Harassment remains a huge factor despite sensitisation workshops. No matter the workforce training organisations offer, the interpersonal interactions among colleagues often rests on humour which could be offensive.

“The organisation may have sensitisation programs and anti-discriminatory laws in place. But if among colleagues there is discrimination, abuse, bullying, slurs, mocking, then queer talent is going to hide,” Raga Olga D’silva, author, entrepreneur, filmmaker and a TedX speaker, told People Matters.

“Make sure that in the organisation nobody can get away with abuse, and anybody who is abused or discriminated against knows what to do. They should have a sense of safety that when they seek support, they will be looked after - not laughed/mocked at, taken lightly or be told they are over-reacting, too sensitive,” D’silva added.

As crucial as it is to tackle queer phobia and unconscious bias, it is equally crucial to weave in conscious inclusion. The why can be explained through the experience and impact of having an inclusive people manager. Talking to People Matters about his past experience, Ketty Avashia, VP Lead Platform Integration India, Wells Fargo & Company said:

“One of my managers in the UK was not very aware of the LGBT+ community, but he was just a very open-minded person. He brought such a level of comfort to our one-on-one meetings that I felt secure enough to come out to him. He simply said, ‘Whatever floats your boat; all I care about is performance.’ Back in those days, when LGBTQ+ awareness and acceptance was very low, this was truly encouraging and motivational.”

Today, Ketty is a technologist with 18+ years of global experience, across the US, the UK, and India, primarily in financial services companies. His experiences have also helped him become an advocate for change. He mentors LGBT+, women and some men at work, and is part of a strong ally network within the industry.

A role model for many, Ketty’s emphasis on being vocal and visible requires workplaces to create safe spaces through conscious inclusion. Such an environment will empower queer leaders to be visible and vocal without any fear of backlash on account of them being queer.

Encouraging employers and leaders to move away from performative allyship, Raga D’silva emphasised their role in driving inclusion through dialogues and visibilty.

“Bring in vocal queer leaders who can share lived experiences, Raga said adding that the ability of queer leaders to be visible rests considerably on the extent of psychological safety they feel.

They might even come out to their immediate social circle at the workplace, however, she cautioned here that one should not out a queer colleague without their explicit consent and knowledge.

“Every visible person is not going to be a voice either, they could be introverts or they might be visible to just their close social system. Never out someone else. Visibility also means protecting someone else. I may be visible but you cannot make me visible until you have sought my permission.”

Steps to elminate queer phobia at the workplace

Pink washing, in other words, tokenism, is becoming a deterrent to authentic inclusion. While brands portray an inclusive image of themselves through social media propaganda every June, it takes away from the real change.

It is one thing to say you are a safe and LGBT+ friendly organisation, and an entirely different thing to truly be one that doesn’t just communicate but actually deliver on those commitments. And this very gap creates leaks that allow harassment and discrimination to cascade.

“Advertising policies of the corporate world have very rarely shown the courage to spearhead a social battle,” said Vandana, Former Assistant Editor, DailyO, in an article talking about the historic reading down of Section 377 in India.

“Corporate world, like the rest of the country, has to move beyond tokenism and work towards ensuring that the equality promised to the community by the court translates into equality in society. Corporate India would have to tweak its hiring policy and also ensure that nobody faces discrimination in their workplace for their gender or sexual identities,” she added.

Given Pride Month is around the corner, the world of work will soon witness a lot of dialogue to boost LGBT+ inclusion at the workplace.

With a wide spectrum to navigate, it will remain essential to ensure both education and action to enhance queer diversity, equity and inclusion at the workplace.

Organisations must step up to address myths, overcome phobia, and make authentic efforts to drive awareness, acceptance and progress.

Bhavna Sarin works as Content Manager and Lead - D&I at People Matters. You can reach out to her at bhavna.sarin@gopeoplematters.com
NEXT STORY: Effective Leadership: Here’s how to find the right leadership style for your business
Also Read: Change management is critical to the success of digital adoption: Canon India’s Shikha Rai
Also Read: Zoom into the roadblocks and zoom out to explore the possibilities at People Matters TechHR India 2022