Highly educated women still choose not to work – at least that’s what the MasterCard Index measured in 18 Asia Pacific markets. The Index suggests capability is not an issue when it comes to gender parity.  In fact, women are highly capable, and in many markets, they are capable more than men. But these educated women still hesitate to join work.

The MasterCard Index of Women’s Advancement paints the picture of the gender gaps in the workforce, and the landscape is no ‘Starry Night’.

The Index measures the socio-economic standing of women across 18 Asia Pacific markets and is comprised of three main indicators which are derived from additional sub- indicators: Capability (Secondary Education, Tertiary Education), Employment (Workforce Participation, Regular Employment) and Leadership (Business Owners, Business Leaders, Political leaders). The scores above show the proportion of women to every 100 men. A score of 100 indicates equality between the sexes. 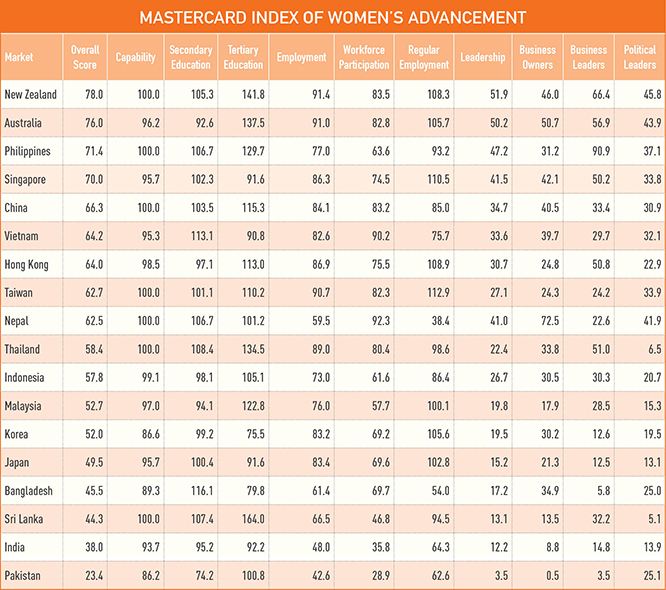 Capability is clearly not the issue when it comes to gender parity. Women’s access to education is comparable to that of men’s and it is not a question of capability across all countries.

Moving from education to work does not always translate for women.

The indices start decreasing as we move from left to right in the table.

“Gender gaps in access to education have narrowed over the years, but we still have a long way to go before women across Asia Pacific are equally represented in business and politics. The lack of critical mass in women’s representation and participation in the economy - coupled with the inadequate and inconsistent implementation of equality legislation - continues to be the biggest challenge for women and is reflected across all markets irrespective of the pace of economic development,” said Georgette Tan, Group Head, Communications, Asia Pacific, MasterCard. “Access is crucial to integrating female talent in the economy as women still don’t have the same access to job opportunities or even social networks as men. A range of factors impacting the economic contributions made by women in the workforce also need to be addressed including country-specific socio-cultural factors, traditional beliefs, and government policies. Closing the gender equality gap and leveling the employment playing field would benefit not just women, but the global economy as a whole.”

Based on the report, it can be concluded that every country is at its own maturity stage in the context of women advancement and the focus areas depend on that construct. For instance, for India, the biggest focus is to bring parity in women participation in the workforce and developing them; while for New Zealand, the focus area is developing women leaders, given the better state of employment index in the country.

Having stated that, these numbers do call for immediate attention of employers and the state as a whole, to bring parity and make women advancement conducive. The gap that prevails is significantly large, and will require a sincere effort in constructing the bridge. This women’s day can be the trigger point.