The equal contribution of women and men in the process of deep economic and societal transformation has been identified to be critical time and again. However, there is still a 32 percent average gender gap that remains to be closed. The reasons the gender pay gap exists include ‘women are less likely to hold higher-level, high-paying jobs compared to men’ and ‘women also tend to move up the career ladder at a slower pace than men’. While such discrimination remains prevalent even in this modern and digital era, there are some forward looking companies who have been able to bridge the gender pay gap.

Recently, IPM India Wholesale Trading Private Limited, a country affiliate of Philip Morris International (PMI), obtained the EQUAL-SALARY Certification. Interestingly, this was the first time the company applied for the audit and learnt they have 100 percent gender pay parity. While the senior leadership never dealt with gender pay gap as a challenge, they always knew that it takes a diverse and inclusive culture to ensure such obstacles don’t exist at all.

“It is our differences more than our similarities that will continue to stimulate business innovation in order to remain successful. Let’s embrace them, nurture them & celebrate them,” said Andre Calantzopoulos, Chief Executive Officer, Philip Morris.

Let’s deep dive into how India Philip Morris (IPM) built a gender diverse and inclusive culture, increased women participation and ensured that there is no gender pay gap in the organization.

The leadership at IPM believes that it is not companies that change industries, but people! Hence, ‘Internal Transformation’ forms a vital part of their transformation journey. IPM acknowledged gender equality as a key enabler to achieve business goals as it helps promote thought diversity and better decision making, ultimately leading to better workplace productivity.

A more focused journey began for IPM India in 2015 with the introduction of target Gender Representation KPIs. The company set an aim to reach minimum 40 percent representation of each gender in management roles by 2022.

They took a bold decision to take up the gender representation KPI from 18 percent in 2015 to 40 percent by 2022. The progression of their gender diversity KPIs since then is as mentioned below: 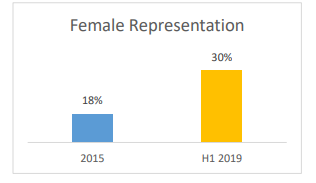 This KPI has been part of Managing Director’s and People and Culture Head’s objectives and part of organization objectives since 2017. These KPIs are shared openly with the employees as well in the bi-monthly town hall.

By adding these metrics to the KPIs of the leaders, IPM reinforced the importance of enhancing gender diversity and by communicating it to all the employees, the company strives to instill it in its culture.

Further, with a belief that the right ecosystem lies at the core of any transformation, IPM takes a holistic approach to make an impact in the various employee life-cycle touchpoints from the gender equality perspective:

The HR team realized that creating a diverse workforce is a continuous process and recruitment is one of the most important tools for this. As they envisaged to reach minimum 40 percent representation of each gender by 2022, they strove for a 50:50 gender hiring ratio. 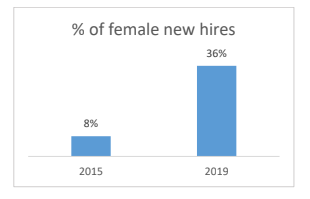 While sometimes following all these action items, makes the entire hiring process lengthy, people managers are patient and understand the longer term perspective to have a diverse talent mix.

While Talent Acquisition helps source diverse employees, a strong Talent Management system supports Capacity Development of their talents which is crucial for ‘sustainable diversity’ in the organization.

Realizing that as an after-effect of the deeply rooted glass ceiling in the society, there can be a paucity of female talent supply in the external market, IPM has focused on grooming talent from an early career stage. The talent is prepared for their career journey through cross-functional movements, international assignments and progression to managerial positions.

At IPM, 25 percent of the top leadership roles and 30 percent of management roles are now occupied by women.

The company was also recognized as UN GCNI Top 10. IPM India ranked amongst the top 10 companies in India in the United Nations GCNI Gender Equality Summit for Best Innovative Practices Awards 2018 for ‘Women at workplace’.

Then a few months back, the EQUAL-SALARY certification validated that IPM India Wholesale Trading Private Limited pays men and women equally for equivalent work, and the process is helping them focus company’s attention on the broader issue of gender equality.

“We have seen positive results for the business for all the efforts and resources invested in ingraining gender equality. The story of driving gender Equality does not end here for us. It is a continuous journey and we seek this for our own better future!”

Drishti Pant is Assistant Manager - Content with People Matters. You can reach her at drishti.pant@gopeoplematters.com
NEXT STORY: Being non-judgemental is one leadership lesson I have learnt on the go: Ganesh Chandan, CHRO, Tata Projects Ltd

PwC India staff to get 75% hike in variable pay

‘If you want people to do a good job, give them a good job to do’

Leaders need to have a purpose bigger than the top or bottom line: Odessa (OJ) Jenkins