Article: It's time to get more women into leadership roles: EY

Gender diversity is now on the agenda of corporate boards and senior management in ways unthinkable a decade ago. This attention has been influenced by several studies, activists and government and regulatory bodies advocating the benefits of having a diverse leadership. Many organizations have already embarked on this journey of change — of advancing towards creating a more inclusive environment — but the pace of change is not fast enough, suggest a report by EY titled ‘Is SHE your next leader?’. that analyses the journey countries and organization globally have made in terms of policies and initiatives to address increase women participation in the workforce.

“Corporates need to create an enabling ecosystem through initiatives including flexibility arrangements, paternity leave, and sponsorship and mentoring, which will inspire women to break the glass ceiling and attain senior positions,” says the report. Governments and organizations should work cohesively on designing an inclusive framework. “What is necessary at the moment is fresh thinking. Embracing a three-pronged framework — strong legislation, comprehensive corporate strategy and senior management accountability for tracking diversity targets — can strongly advocate for equal opportunity and increased participation for women,” the report adds.

Although women are more likely to attain tertiary education than men, their representation in the labor force as well as in the global corporate leadership pool continues to be low, the report adds. As per ‘Education at a Glance 2018: OECD Indicators’ by Organisation for Economic Co-operation and Development (OECD), 50% of women aged 25-34 years were tertiary educated on an average across OECD countries as compared to only 38% of men of the same age group in 2017. There are two barriers that hold women to take charge. One, attitudinal barriers which comprise of age-old stereotypes to corporate leadership and less advocacy for pay raises and promotion. Second is structural barriers which comprise of gender-insensitive hiring practices. 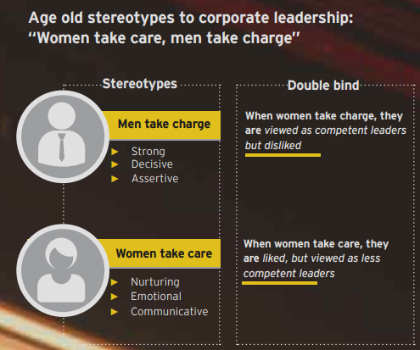 Companies’ inability to retain women in the initial five to seven years is another factor that impedes their career growth. Lack of women-friendly organizational practices (such as maternity benefits, childcare infrastructure, elastic workplaces (flexi-time, work-from-home and part-time) and relaunching women back into the workforce after temporary career breaks) can hamper women’s journey to leadership roles.  Lack of gender-neutral hiring practices has been one of the leading factors contributing to the paucity of women in an organization’s employee base and eventually, in leadership pipeline. Multiple parameters including all-male interview panels and gender biased job postings in an organization deter women from competing for jobs. Criteria used to assess performance in hiring processes need to incorporate gender-neutral measures of success.

As per PayScale’s research 2018, women tend to leave the workforce more frequently than men and their breaks tend to last longer. Due to this leakage in the pipeline of talent, it becomes challenging to find capable, experienced women who are able to take on leadership roles.

Clock is ticking for a radical change

#MeToo and #TimesUp campaigns have accentuated the global activism for equality of women. Now is the time to act for increased women representation in leadership roles.  As per a 2017 LinkedIn report, since 2008 more women have been hired into leadership positions around the world. Although the gender gap persists, women on an average held over 25% of all leadership positions globally in 2016. As per World Economic Forum’s Global Gender Gap report 2017, 22% of individuals holding senior managerial positions globally were women. 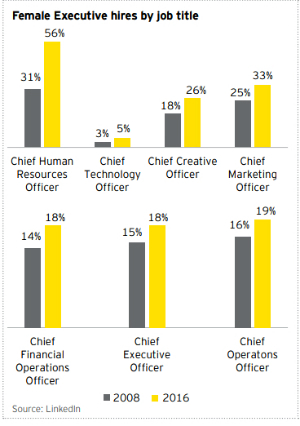 Of the countries analyzed, Canada, the US and, France had the highest percentage of women in leadership roles, having an average of one-third of women holding leadership roles (director-level and above).

Historically, India has trailed in hiring women into leadership positions. However, during 2008-16, it has gained significant momentum with the largest percentage increase being hired into leadership roles.

Although women hired accounted for only 18.9% of the leadership roles in the technology sector globally in 2016, the sector saw the largest increase of about 18% during 2008-16.

Budding women CHROs in the workforce

Chief Human Resources Officer (CHRO) role saw the highest increase (82%) in terms of the percentage of female executive hires globally during 2008-16. Several studies reveal how companies with gender-diverse management teams have consistently performed better and been more profitable than those without them. A 2015 research from The Peterson Institute for International Economics and EY revealed that an organization with 30% female leaders could add up to 6% to its net margin.

The significance of gender diversity to propel innovation is very critical in the present scenario as businesses across sectors strive to stay competitive in light of technological disruption.

Mastufa is the Associate Editor with People Matters global. You can reach out to him at mastufa.ahmed@gopeoplematters.com.
NEXT STORY: A start-up’s guide to HR

5 most critical skillsets that will help professionals in 2021

The basics of culture-building in a new hybrid workplace

What should the constitution of the new workplace look like?

Diversity is very important to the future of recruiting: LinkedIn Report

Patriarchy in the region has not gone away: UN Women’s Naciri

DICV and Diversity: 20% of blue collar workforce to be women by 2022