Article: Is it time to rewrite sexist job descriptions?

It’s difficult to turn a blind eye to a job description that reeks of sexism. People today are becoming increasingly intolerant towards sex-based generalizations, and why wouldn’t they? Gone are the days when a specific job remained the privilege of a particular gender.

Vestra Inet, a Toronto-based web development firm, posted a really elaborate job ad for their requirement of a receptionist. Only thing, the ad had a wildly sexist sign off - “Please note that the position requires filling in the responsibilities of a receptionist, so female candidates are preferred.” 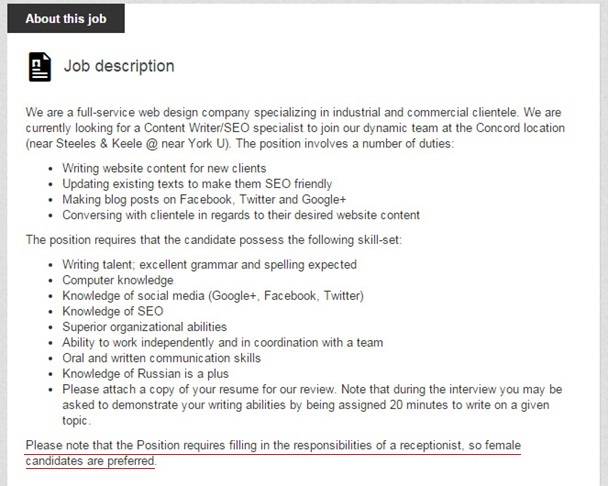 The Linked job posting sparked an outrage on twitter for obvious reasons. Albeit the ad has been taken off the portal, the Vestra’s reputation as an employer has taken a blow.

While the above ad is bluntly stating the gender preference for the profile, there are certain job adverts which subtly perpetuate gender-based profiling for jobs.

Most of the times, an employer or a person who is posting the job advert is unaware of the sexist implications certain words make. One might unconsciously end up using a certain phrase or word which positions the qualities of a particular gender unfavorably.

According to a research there is an established literature documenting widely held gender stereotypes (e.g., Glick & Fiske, 1996) and differences in the way men and women use everyday language (e.g., Pennebaker, Mehl, & Niederhoffer, 2003). Women are predominantly pegged to be more friendly and social then men, whereas men are associated with qualities like energetic and confident.

Let us take this job advert for example 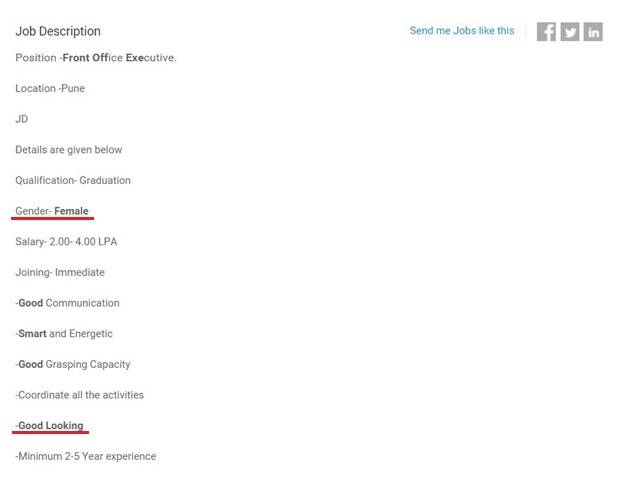 The behavior is not country-specific. Globally, people tend to associate certain traits to a gender. People pick up on such biases at an early age and from people around them. To tackle this, The Institute of Physics has issued guidelines for kids in England – a list of ‘sexist’ words which are not to be used in the playground. Countries around the world must adopt similar ways to curb gender-based biases and every other harmless bias which may still be unreasonable.

Pooja Channe is the Senior Associate – Content at People Matters. Reach her at pooja.channe@peoplematters.in
NEXT STORY: Price is what you pay, Value is what you get
Also Read: Diversity without inclusion is like having an engine without fuel: Nomura’s Arijit Pal Choudhury
Also Read: Reconciling differences to build an inclusive workplace

The new paradigm: well-being for a new age workforce

Effective strategies that can make the IT sector gender-inclusive

Leaders must treat diversity like any other business process: Thoughtworks’ Chirag Doshi