When Shweta decided to take a career break, it seemed like the right thing to do. She had gone through a brief surgery, was moving cities and had been planning to have another child. In the midst of this, she was offered a work from home option which she opted for until her delivery.

After a seven month break, she felt unhappy about not working and wanted to get back to building her career. “I sensed during my brief break that any career break tends to drain one’s confidence,” she said.

Shweta was invited by Shell to attend a session for women on a career break. That evening, she told her husband she would join the company if she was offered a role.

After an interview with a department lead, Shweta informed the company about when she would be ready for work. The company considered her preference and also her interest in a content-based position. It was this effort – to accommodate the individual’s choice or preference that she says really helped.

For Rohini, a mother who went on a break after eight years of work experience, exploring the job market felt different in just a matter of a few years. “I spent more time explaining why I took a break rather than going over my technical proficiency,” Rohini said.

Gender diversity and inclusion has been a top priority agenda for corporate India. And while companies take steps to address the issue at the entry level and at the senior leadership level, a critical pipeline of talent is lost in the late 20s to early 30s age range.

“This is because women tend to re-assess their work-life priorities during this time,” says Tarun Varma, Vice President – Human Resources, Shell India.

“If we put ourselves in the shoes of the professionally qualified women who have left the workforce, we need to ask what they need to get back to the workforce,” said Tarun. “There is a need to recognize the fact that men and women need to be a part of both the ‘cash and care’ economy”

At Shell, the company focused on a two-pronged strategy. One is to interrupt biases and second is to understand the potential roadblocks for women joining back and address them. “There are roadblocks that companies can address and there are those they can’t, and we are open about it,” Tarun said.

One of the first steps the company took was to align the leadership. The company identified certain leaders that the women could look up to and role model after. As the next step in interrupting biases, they worked with the line managers.

Under the company’s “Balance means business” initiative, the company introduced a range of programs oriented at building inclusive leadership styles.

By leveraging the company’s vibrant employee network at every site, women employees had access to a Shell branch network to make the most of the programs on offer. 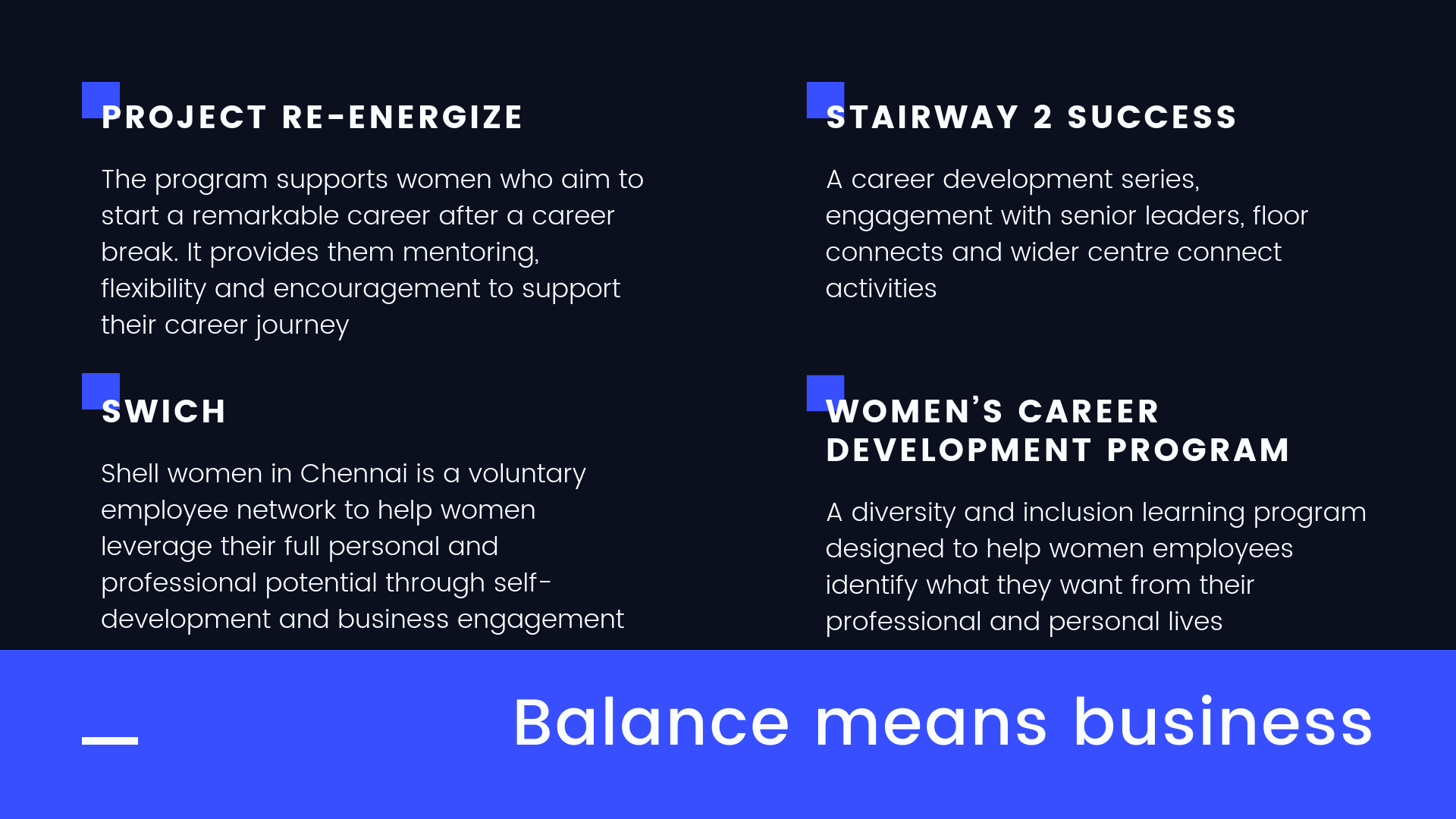 The power of conversation

To get away from a one size fits all approach, the company started to prioritize conversations with women employees.

One needs to have an ‘unblock and unlock’ conversation because often it is a potential barrier in the mind that needs attention, Tarun said. “How can you help the employee unblock that barrier? And unlock the potential within them?”

An internal program called “Project Re-energize” was focused on identifying line managers who are the most open-minded, progressive, and capable of enabling coaching. The company leveraged their support in identifying women who are interested in joining back.

You need to give people the opportunity to share concerns and it can’t be structural, it has to be personal and one-on-one, Tarun said.

This approach helped to address critical mental blocks for the women. They asked questions such as – “How can I compete with someone much younger with different skillsets? And will I be successful?”

Once this conversation was complete, there were five to six issues that were jointly identified. These were issues that the company could address and/or support.  The end-in-mind of the company’s drive was to ensure that the women could join the company and be confident about building a meaningful career.

Another key measure that helped drive the D&I agenda was benchmarking policies. Participation in external studies and partnering with organizations driving diversity and inclusion goals were steps that help assess the company’s efforts.

On a closing note, Tarun said, “For me, diversity is to do with the numbers but the real magic is inclusion. One can have the numbers, but the moment they don’t experience an inclusive culture, people will call you out.”

The question in front of talent leaders is this: How many women employees experience inclusion on a personal level?

J Jerry Moses is a senior content manager at People Matters. He can be reached at jerry.moses@gopeoplematters.com
NEXT STORY: Rethink HR for a world without borders
Also Read: How HR leaders can do more to help organisations thrive
Also Read: 5 warning signs of remote burnout and ways to help prevent it