The experience of building the core team and the culture, particularly in a startup requires absolute honesty, openness and transparency. It doesn’t give a CEO the right to impose any autocratic decisions and choices. If you really want the smartest people on the planetto come and work with you then you need to give them the due respect, freedom and ownership and above all a sense of – ‘we are in this together’. You cannot have both the things -- the smartest people on the planet and expect themto not have their own opinions, views and ideas that they want to experiment with. Otherwise the smart ones will leave you because they are intelligent enough to find a job elsewhere and the people that you will be left with will be the sycophants -- they will not challenge you.

I was very very clear about this from the start. As a fresh graduate out of IIT Madras, my first job was at Capital One in the UK. The employees over there experienced freedom to do whatever they wanted to do in the areas that they wanted to work in. Any discussions that took place in the company were solely backed by the truth of analytics and rarely arbitrary. Even the bosses could be contradicted in a professional setting and they took it in that spirit. The promotions would be celebrated openly in the townhalls and posters would be put up all over the company. It was a very different experience and a very different imagination of what an organization could look like compared to what I later observed in my jobs at Barclay’s and Aviva in India. In the Indian context, there was more hierarchy and politics; the culture part was not focused upon. In the UK, we had dedicated sessions on what our culture is, what each value means, how we inculcate it etc. Here it is something which gets mentioned somewhere on the wall on a chart in the HR office or stated on the website, but not really practiced. The promotions tended to be hush hush and not shared or celebrated with colleagues. I could see how big a difference culture could make to somebody’s morale and excitement to work in a place and how it could be a differentiating factor.

Another thing that I really liked about my Capital One stint is that they build their talent from ground up. Their view was that if you build a team this way, it becomes very easy to mold everyone into a common culture and come to a common understanding about what it is. But laterally hired people bring their own experiences, baggage and understanding of how things are done, which may or may not work. These two things have stayed with me since the Capital One days. This is not to say that the stints in India did not teach me a lot — from a business perspective I learnt a lot more about running a business in India than I did in the UK — the complexities and skill of operations and the fire fighting that happens all the time. But in terms of how to build a team and a culture, my learnings came from my first job at Capital One. 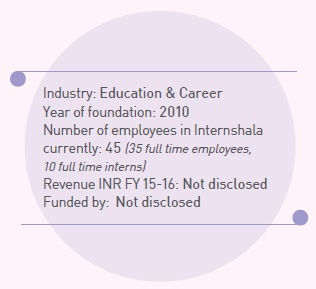 This is the one thing that I think we really got right with our team. In terms of what I could have done better -- initially Internshala was built by interns and so that built a kind of micromanagement into me that did not go away with when the same people took on larger and more responsible roles. I initially used to interfere in everything -- every single email campaign that we were doing, asking people ‘why did you do this this way or that way’ etc. I realized a little late in the journey that once you have focused all your energies to get the right person in the team -- skills and culture fit wise, then you don’t have to spend your energy in managing them. Planning is another thing that one should focus on. As a startup you are so focused on firefighting that you sort of lose sightof the larger picture of where you need to get to and by when. That kind of takes a back seat and sooner or later if that is not being done – the sense of purpose of why we are doing what we are doing, where are we going starts getting lost. Breaking down the larger aim down to smaller milestones and action goals is really important to keep the team excited and motivated.

The editorial team at People Matters has features writers, researchers and content experts with rich domain knowledge. We endeavour to create an impact on the HR community through thought-provoking and futuristic content.
NEXT STORY: Team building journey of an HR professional turned Entrepreneur
Also Read: How can oil and gas industry fuel its renewable energy talent pipeline?
Also Read: Does your job ad convey the right message?

How can oil and gas industry fuel its renewable energy talent pipeline?

Transitioning towards formality: How do we break down informal work arrangements?

How can oil and gas industry fuel its renewable energy talent pipeline?

Did you know 8 out of 10 interviewers damage your recruitment brand?

With the right people, partners and technology, we can make remote hiring a success: Deel’s Karen Ng