Co-working is not just a rebranded old concept

Sukhada Chaudhary is an alumnus of MICA, Ahmedabad. She was in Mumbai working remotely for a company in London when she got to know what works out of a co-working space was. She also observed that startups were moving to smaller towns where the real estate was not as crazily priced as Mumbai. That was when she thought of her next gig. She came back to her hometown, Nagpur, and started “Chaos Theory” – a co-working space. For 300 rupees a day, anyone can use the space. Beverages, Wi-Fi, printers etc. — all are included in this deal. When Zomato started up in Nagpur, Chaos Theory was the obvious choice until they grew so rapidly that they needed their own office space. It has also been utilized by the team of Swiggy in its Nagpur launch phase.

Co-working spaces are different from managed offices. Mona Shukla of CorporateEdge, Gurgaon offers managed offices. These are high-end offices which rent out their space to one single client. The clients ask CorporateEdge to design the office in a manner that is consistent with their brand and conveys their values. 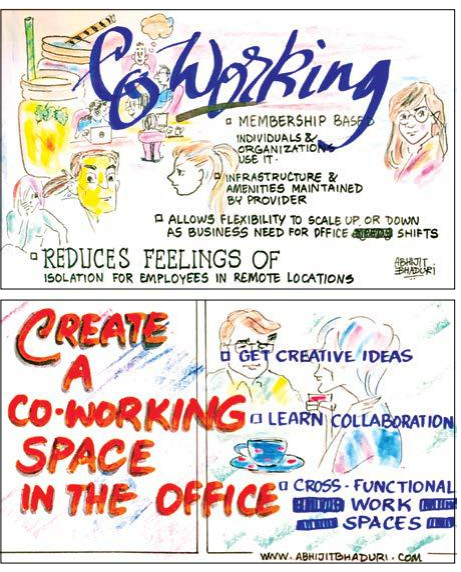 Almost a decade ago Starbucks branded itself as the “third space” after office and home, where work happened. As the nature of work, working, and workers have all changed, a fourth space has emerged. This is the space called Co-working – which is many employers sharing a common workspace. Co-working spaces get people from large, small, and medium enterprises and the solopreneurs (lone employee of a company or a gig worker who connects to the world on his or her mobile), and is a membership-based working space that can be rented for as long as you wish — a booming market in India. Such spaces have many different organizations and individuals working side-by-side — some of them “hot-desk”, some have a fixed office space, while others rent out a cabin to work.

Starbucks claimed to offer the 3rd space to work after office and home. Co-working is the fourth 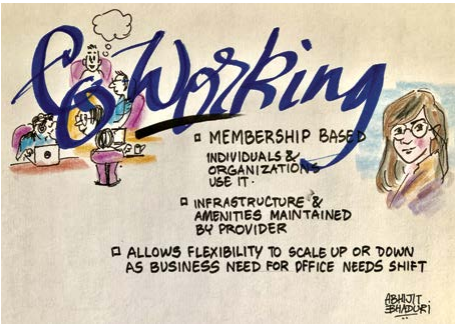 Plug and play in office space for employers

WeWork entered India with one location in Bengaluru in July 2017 and now it has 12 locations across three cities - Bengaluru, Mumbai and Delhi NCR. SoftBank invested $3 billion into WeWork directly, and an additional $1.4 billion invested into three subsidiaries, WeWork China, WeWork Japan and WeWork Pacific. Could that be that SoftBank sees the rise of communities around work as the future?

Several companies from a Microsoft to the college dropouts building their startups, are customers of co-working spaces. A part of the Jaguar Land Rover’s team works from WeWork in Mumbai and almost 180 people work out of the Smartworks space in Pune. Smartworks Pune also has Amazon India while some of Google’s teams work out of Awfis (another co-working space provider) in Gurgaon.

As organizations expand, they do not need to keep building or leasing office space. Co-working spaces offer a plug-and-play option and a terrific place for people to tap into the diverse skill sets available around.

Co-working is not a workspace industry; it’s a happiness industry

A new way of working

Why is co-working emerging as the fourth space of work? When large companies want to expand their geographical footprint, they need to test the waters. Co-working spaces offer a great way to test the market. It is the equivalent of creating a “prototype”. If the market opens up, as it did for Swiggy and Zomato in Nagpur, they can always add more seats until it makes sense to have their own office space.

For medium-sized enterprises, it is a cost-effective way to put money into the business, not get locked into long term contracts for real estate. They also find co-working spaces handy for networking and creating an ecosystem of service providers, and also find partners and employees in that space. The coworking community is just a new way of working. Ride-sharing companies made people ask if it was worth having an asset that was used only a few hours a day; co-working spaces are making people question if it is worth investing in office space.

Does work have to be done only in an office? Is work-from-home the only alternative? Can the commuting space be a place to work as well? If Uber told us how to hail a ride through an app, the startup Shuttl wants to replace the need for organizations to invest in buses. With high-speed Wi-Fi becoming ubiquitous, the commute to work could become a new place to learn, listen to music or podcasts, rest, and entertain on the way to work.

Not just another place to work

As companies are reducing their investments in office spaces, they are letting people work from home. Work from home allows people to address their domestic responsibilities like caring for a family. Gallup’s data shows that 43 percent of American employees report that they work remotely “at least some of the time”, up from 39 percent in 2012. Gallup also reports that the people who work remotely “at least some of the time” are spending even more time working remotely. The number of independent workers (freelancers, independent consultants, etc.) is also increasing, with most of these people working remotely.  However, there is an emotional price to pay for this flexibility. That is the epidemic of loneliness.

In a survey released by the Global Coworking Unconference Conference, people using co-working spaces described the benefits of co-working to be social connections and better networks.

What if your employer built a co-working space?

Many organizations struggle to build collaboration skills among their leaders. Innovation can happen effortlessly if the place encourages free thinking. Create a funky work environment and invite employees to work from that space occasionally. The digital giants are building big offices for a reason. If that is too much to do, just rent some seats in a co-working space. It is the fourth space. It is the future of working.

Abhijit Bhaduri is columnist, author & coach to senior leaders. He is the author of two bestsellers: The Digital Tsunami & Don't Hire the Best
NEXT STORY: Gamification and scenario-based learning programs are on the rise: Shell's Global Head of OD & Learning

Reimagining the future of work and the workplace

The employees’ role in 'speaking up'