In 1993, a limited liability company founded by Naresh Goyal began its journey as an air taxi operator. Later, in 1995 it began full-fledged operations and added international flights in 2004. Gradually it expanded its business and gained its market share in India to become the largest carrier by passenger market share in the country by 2010. Yes, the airlines referred to here is none other than Jet Airways.

Once the largest carrier in the country, Jet Airways, is now struggling to pay its debts and retain its staff. Currently, Jet Airways has a debt of around Rs 8,500 crore. The increased debts and strained finances have been causing disturbances in the airlines’ internal teams and have been negatively affecting leadership. Besides many other senior exits, the most recent loss to Jet has been Goyal’s exit as both Chairman and board member. Goyal’s stake has also been halved from 51 to 25.5 percent. Further, Abu Dhabi-based Etihad, which owned 24 percent in Jet is now left with only 12 percent.

Amidst the turbulence Jet is going through currently, the most affected have been the pilots and the rest of the staff. Waiting for their salaries for months now some of them have even quit or are looking to quit and moving to other airlines like IndiGo and Spicejet.

Employees: The worst hit by the crisis

The moment there is a cash flow issue, employee salary is the first thing to get affected.

It all began in 2018, when Jet Airways laid off twenty employees in October, including some senior-level executives from the in-flight services department. Before that, it asked 15 managerial level employees from various departments including engineering, security, and sales, to leave the company.

Since 2018 it has been unable to pay salaries on time as well. Recently, the pilots have threatened to go on strike is their salary dues are not cleared by 15th April. Initially, the strike was to start from 1st April, however, as the airline credited 87.5 percent of pending dues of their December salaries, pilots decided that time is given to the new interim management till April 14 to clear salary dues.

With a new interim board in place, Jet Airways and its employees have some hope to get back on track and fly smoothly to have a safe landing.

But how can they regain the lost employer brand value and make their way out of this crisis? And what can other companies learn from Jet’s case?

The ongoing scenario has obviously done a lot of damage to Jet Airways’ image. Besides retaining its current workforce, it also has to come up with a more robust plan to attract new candidates.

While it is difficult to say how Jet Airways could have avoided the financial crisis, the way talent was managed in this situation could definitely have been better.

Kamal Karanth, Talent Specialist and Co-Founder, Xpheno feels that the HR crisis could have been averted. He says, “Unlike other airlines, Jet and Indigo have the scale. So growth opportunities and large roles can be eventually provided to Jet's employees in a sector which is still growing in India.”

He also suggests that HR should provide timely status report and assurance to employees about the current crisis in a transparent way.

Dr. Aquil Busrai, Chief Executive Officer at Aquil Busrai Consulting also gives a similar suggestion and emphasizes on involving employees in some key decisions the airlines shall take going forward. He says, “Besides headcount reduction, involve employees in cost reduction measures. Make them a genuine partner while dealing with crisis and they will stand shoulder to shoulder. Try the power of teamwork - even external stakeholders will gain confidence and bailout.”

Transparency is key in situations like these. It is required to ensure that the organization builds a relationship of trust with their employees.

Secondly, it is important that the leadership stays connected to employees at all levels.

With the topic being so covered and talked about everywhere, it is essential that Jet Airways create internal promoters who can be evangelists to the larger employees.

Although some employees have already left the company and some might be considering the option to quit, there would be some of them who even in difficult times like these, are able to stay committed to their organization.

Torn between sticking with Jet Airways and safeguarding their own career, what should these employees do? What is the right approach in such cases?

Karanth recommends, “Employees should stay engaged with their job and minimize customer loss due to a bad experience.”

While it's easy to say that employees shouldn’t lose focus, it is indeed a paradoxical situation for them. Karanth reiterates, “This is a difficult one to comprehend for all the employees.”

The future of Jet Airways now depends on the management and how they move step by step with the employees, gaining their confidence and building more trust. 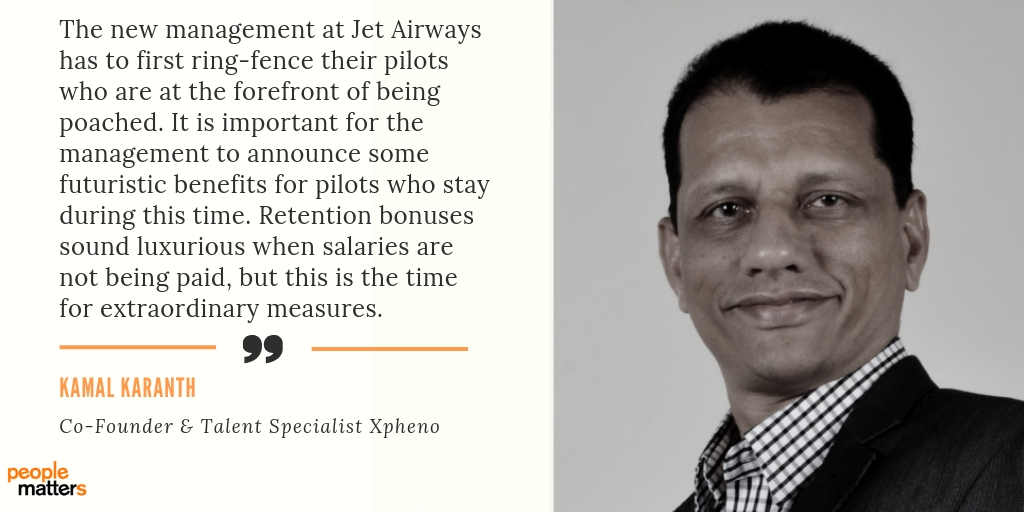 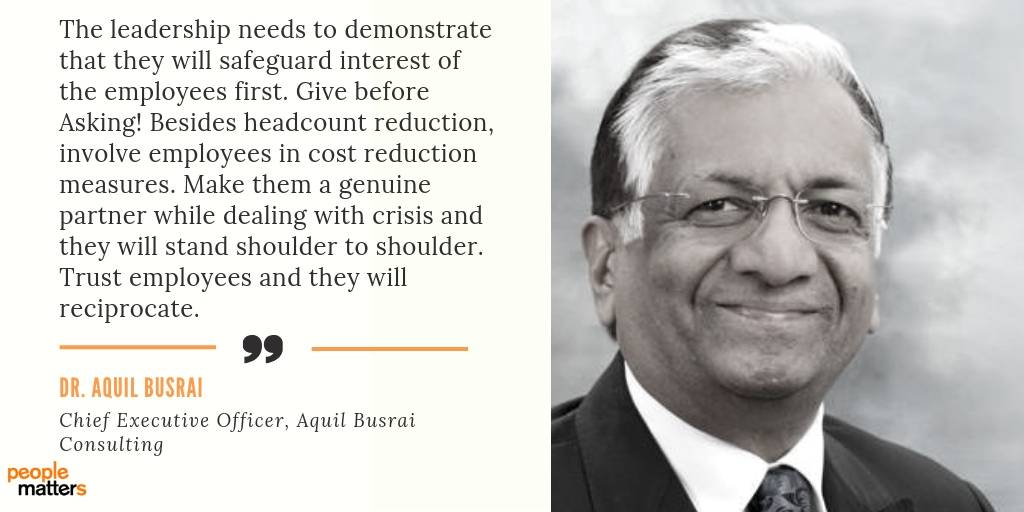 With the government taking a keen interest in the developments surrounding Jet Airways, employees at the airlines have more hope. Karanth comments, “Jet has become too big to fail.”

The cash-strapped company now has more responsibilities on its shoulders and a point to prove. Only time will tell if they are able to soar high from these issues and begin a new journey. Until then they will be the center of attention. If Jet Airways is able to come out of this crisis and retain its brand value, it would set a good example. With a new board in place, how will it ensure that is to something that is being keenly watched.

FedEx to cull up over 10% of management jobs