Article: The connect between satisfaction and commitment

It was twenty-five years ago working as Head HR of a petrochemical company, I was working on a series of HR initiatives to arrest attrition and develop the talent in the company. In this process, I developed a tool basing it on the Porter and Lawler Model of Motivation to understand the Organizational Climate and the thinking of the people.

Some of the interesting features he understood at that time were that even though people were expressing a high score for Intrinsic factors yet they left the company to go to the Gulf to achieve their career aspirations. Career aspiration to go to the Gulf was not merely a career aspiration. The people saw in that a way to fulfill the family responsibilities. Family formed a major factor in the Indian setting which was not given much importance in the western literature while assessing work motivation.

The motivation to exert effort towards performance is jointly determined by the value placed on a certain type of outcomes (rewards) by the individuals and the degree to which the individual believes that his effort will lead to the attainment of these outcomes.

Using these findings and other interesting ones, I was able to conceptualize Human Resource policies which were relevant to the need. I found that people from the higher socio-economic status from the local area will stay in the company and from those from the lower socio-economic status will come back if the company has a suitable policy. I even suggested a sabbatical for engineers who had completed a particular period during which time they can go to the Gulf earn and come back-of course it was considered preposterous in those days. This was suggested as it was found that by no means one can retain the people after 4-5 years as they were clear of going to the gulf. It was found that for the well-to-do getting a good company was a boon and enhancement to their status in the local area. There was no great need for them to go and earn more. It is interesting to note that after many years some of these predictions have come true today; the employees, who had then come from the economically poor strata, now after meeting their financial commitments, were willing to take up jobs back in their hometown. These predictions were based on data collected from the Employee Satisfaction Survey I conceptualized and conducted then.

The insights gained from these experiences led me to conclude that each employee is unique and the type of rewards that motivates them to stay with the organization differs according to the degree of worth the employee places on the reward. These insights are consistent with the postulates of Porter and Lawler Model of Motivation and therefore I conceived an Employee Satisfaction Model based on a motivational framework, which could to a significant extent slow down attrition. In the past several years, I have refined this idea a lot and developed this framework in my various consulting assignments with quite successful outcomes.

Even though field experience with this framework is highly rewarding, it is necessary to subject this framework to statistical scrutiny to attain professional acceptability. For this purpose, I have collected data using an Employee Satisfaction Survey, a questionnaire developed and validated from employees of various companies wherein I had consulting assignments. In this article a brief description of the research I have carried out and the results and its implications are presented.

According to Porter and Lawler (1968), the motivation to exert effort towards performance is jointly determined by the value placed on certain type of outcomes (rewards) by the individuals and the degree to which the individual believes that his/her effort will lead to the attainment of these outcomes. The resulting performance depends upon possession of compatible abilities and personality characteristics and well-defined job roles and their correct perceptions on the part of the individual. The performance will be followed by experiencing rewards of either extrinsic (working conditions, status, monetary incentives) or intrinsic (sense of accomplishment, recognition, growth) ones, and if these rewards are perceived equitable (in terms of their and their reference groups’ input and output ratio) the employee will attain satisfaction. The satisfaction will, in turn, reinforce his/her belief in effort outcome relationship enabling this virtuous cycle to recur. Figure 1 gives a schematic depiction of the model. 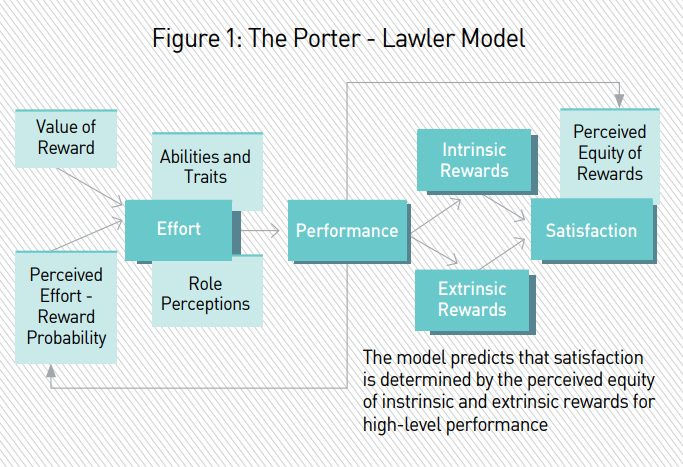 The author’s proposed employee satisfaction model was designed to explore the impact of rewards on satisfaction and commitment.  This model is conceived on the premise that the performance leads to rewards which could be either extrinsic or intrinsic and these rewards leads to satisfaction, and satisfaction, in turn, leads to commitment.  Commitment, in turn, leads to increased efforts resulting in better performance. Other factors alluded in Porter’s model are implicit. For example, expending efforts towards performance is possible only if the employee values the rewarding outcomes and believes that expanding efforts lead to those cherished outcomes.  Similarly, better performance is possible only if the employee has the compatible abilities and personality traits and well-defined job roles and their clear understanding. The author has brought Work life balance, Team and Stress as Moderating variables. The satisfaction experienced from rewarding outcomes is possible only when the employee perceives equity. Hence this model assumes that other factors are inherently present. It is imperative on the part of the organizations to provide these factors through better communication, selection, and jobs and role definitions and equitable compensation system. What is not known is how different type of rewards impact satisfaction and commitment, and the model is conceived to answer this question. Another advantage of this model is its simplicity and usability.  Figure 2 describes the model schematically. 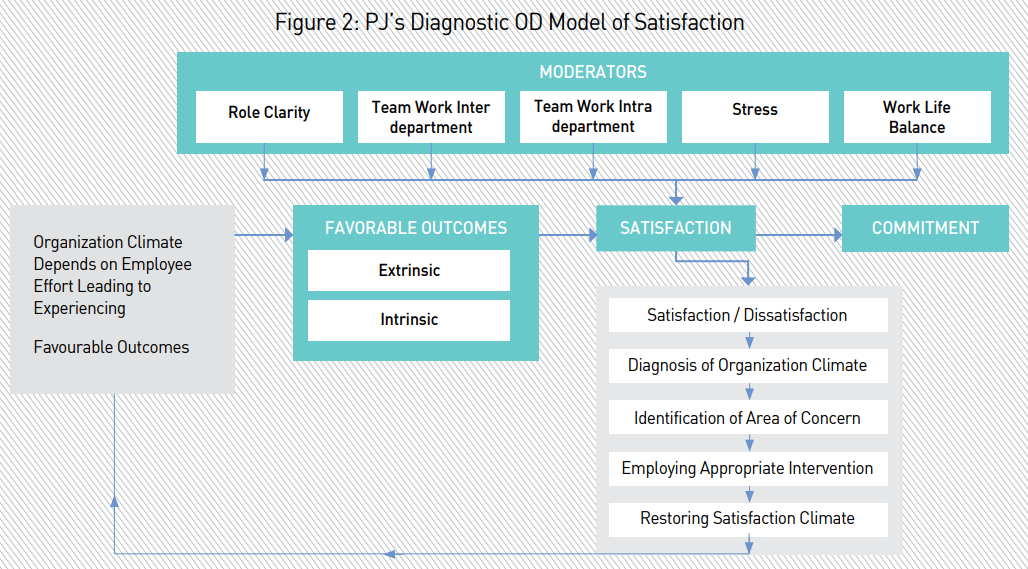 The model implies that Extrinsic (Ext) and Intrinsic (Int) rewards impact Organizational Commitment (Cmt) not directly but mediated through Job Satisfaction (Js). In other words, the effect of Ext and Int rewards on commitment is through increase in job satisfaction. This relationship differs for employees with different levels of Stress (Str). In other words, the mediation effects of JS on the rewards-commitment relationship are moderated by levels of Str. In the model depicted above several moderators are postulated. In the current research, only stress was considered as moderator. 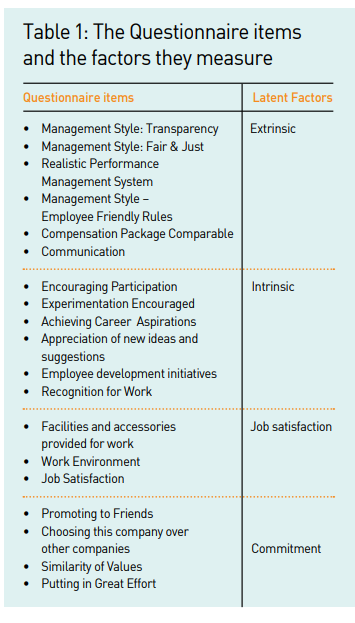 and confirmatory factor analyses, statistical techniques used for estimating common content (construct or factors) among varied questionnaire items. Data from 1243 employees of four manufacturing companies were collected for this questionnaire validation study. These 20 items converge into 4 latent (hidden or unobservable) constructs or factors namely extrinsic, intrinsic, job satisfaction, commitment. The items of the questionnaire and their latent factors they measure are shown in table 1. The statistical measures of contribution of each item on the respective factors (factor loadings), total variance shared by all items of the respective factor (convergent validity), independence of each factor from the other factor (discriminant validity) and consistency of measurement of each factor (reliability) are all in acceptable range pointing to acceptable validity of the questionnaire.

Increase in extrinsic rewards directly increases commitment but not job satisfaction. In other words, Job satisfaction does not mediate this relationship

Data was collected from a total population of 743 employees of a manufacturing company. Each questionnaire items was responded on a 5-point scale from strongly disagree (1) to strongly agree (5). After cleaning up the data only 527 respondents’ data were retained for further analysis. The analytical strategy is briefly given below:

This model is tested by fitting structural equation model and examining the path coefficients (the one headed arrows emanating from each factor to other factors). First, we established the mediator relationship. This was done in the following way:

Firstly, the direct effect – path coefficients of single-headed arrow originating from extrinsic (Ex) and intrinsic (In) rewards directly to commitment (Cmt) was examined

Thirdly, the total effect was estimated by summing the coefficients of direct & indirect effects.

Fourthly, the mediating influence of Js was estimated by comparing direct effects with total effects for both types of rewards.

If the path coefficients of direct and indirect effect did not differ, than the mediator effect of Js is none existent. On the other hand, if the difference exists, then depending on the direction and magnitude of the difference either full of partial mediation of Js could be inferred.

Moderator effect of stress on this relationship was estimated by doing the aforesaid steps for each level of stress and compares the mediator influence for low and high-stress respondents. 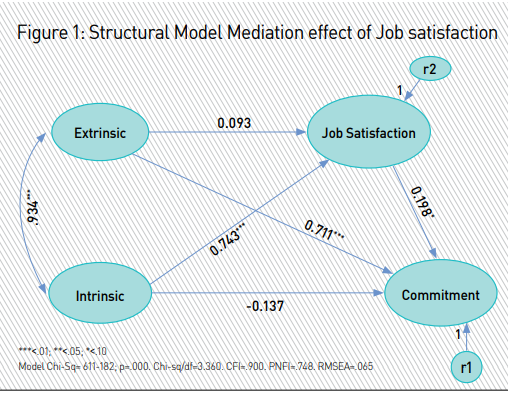 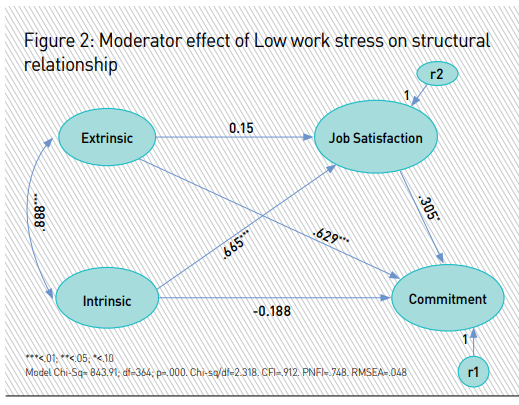 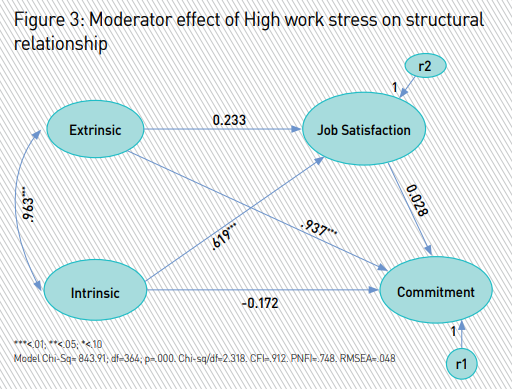 Figures 1, 2 and 3 depict the findings schematically.

1. Increase in extrinsic rewards directly increases commitment but not job satisfaction. In other words, Job satisfaction does not mediate this relationship.

3. Levels job stress experienced by employees, change the nature of this relationship.

5. Irrespective of felt levels of stress, the direct relationship between extrinsic rewards and commitment is strongly present.

Employees with continuance commitment show commitment mainly due to fear of losing the job and personal, social and economic benefits attached to the job. These types of employees do not show any affective inclinations. They may or may not be satisfied in their jobs. The third types of employees who show normative commitment have a sense of obligation towards the organization as it is the chief provider of livelihood. Irrespective of whether they like the job or not their moral values force them to be committed to the job and organization.

This finding shows strong resemblance to what I encountered in the Petrochemical Company many years ago as despite getting high scores for Intrinsic they left for the Gulf due to the pull of the Extrinsic factors. However, this may vary in accordance to the company, different levels of employees and their specific needs. The model has the capabilities to capture the cause-effect relationship for satisfaction and commitment of each company and thereby devise appropriate solutions. This is a dynamic model and not a static model which is very essential to understand as each company and different groups of employees will have different needs. The most important aspect of this model is that one can understand what can be done to improve satisfaction and commitment in each case.

Lawler, Edward & Porter Lyman, “The Effect of Performance on Job Satisfaction” Industrial relations: a Journal of Economy and society, October 1967.