These statistics show where India is in terms of female workforce participation and gender parity. Discussed at length in the Teamlease’s report titled The Impact of Maternity Benefits on Business and Employment, the statistics present a grim reality of the progress that India has made when it comes to accepting women at the workplace despite some sweeping legislative changes, and the divided opinion of the India Inc. on The Maternity Benefit (Amendment) Act 2017.

In early March last year, India was able to ‘steer’ some of the most progressive amendments to the long untouched Maternity Benefits Act of 1961. The bill, titled the Maternity Benefit (Amendment) Bill, was introduced in the Rajya Sabha on the 11th of August 2016, and having passed the house on the same day, went through the deliberations of Lok Sabha; it was finally ratified by the President in the early weeks of March 2017. 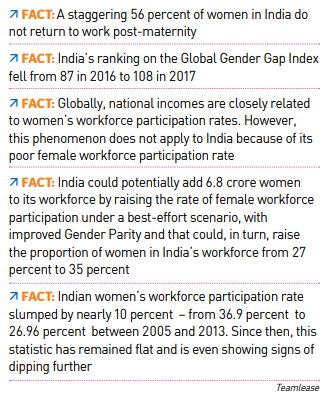 Hailed by many as one of the most progressive maternity care laws in the world, it was expected that the act would help reach out to women who often fall out of the talent pipeline or the labor markets as they took the responsibilities of motherhood. Among the many changes brought by the recent amendment, the extension of the maternity period to 26 weeks hoped to prove pivotal in ensuring women don’t leave the workforce and had enough time to readjust themselves to their old work ways after the expiration of their maternity leaves. Although the extension of leave period from 12 weeks to 26 weeks stands out, other benefits like the crèche facility and the provision for mother having 12 weeks leave period for adoption of a child were moves aimed at making women feel comfortable with taking a break from their work. 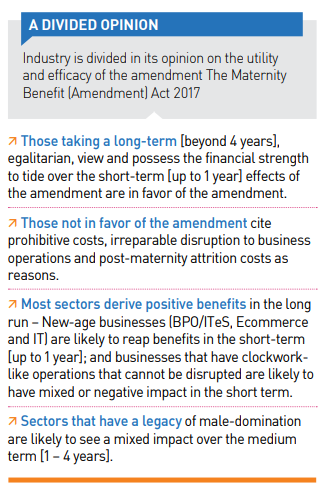 But like many past experiences have shown, it has rarely been the case where an amendment in isolation could solve issues that are more systemic in nature, that too without creating complications of its own.

The real cost of the benefit

Although the Maternity Benefits Amendment Bill has put in provisions that are new and progressive towards providing help to women workers, many have argued that the changes within the bill put an added amount pressure on companies who now need to figure out the ways to fund the extended period of leave. A fact that might just lead them to the closest option available to avoid such costs: reduce the number of women hires.

In addition, to not include the millions of women who do not fall under formal employment, experts had argued that the amendments might lead to results that are contrary to the ones expected of it. Companies, instead of ramping up their maternity care services — which the bill assumes to only be the employers' responsibility—might hire fewer women. Slowly such speculations are now translating into real concerns, concerns of jobs actually going down for women. According to TeamLease, around 11 to 18 lakh jobs in over 10 sectors would be affected in FY 18-19 as a direct result of the Maternity Benefits (Amendment) Bill.

Although the figure is not absolute, the net effects of the amendment are likely to be negative, with a potential job loss of about 1.6 percent to 2.6 percent over FY 2018-19, across sectors and industry behavior that ranges from benevolent to manipulative.

The report also states that the post-maternity retention could cost 80 percent – 90 percent of the annual salary in case of white-collar employees, and up to 135 percent of annual salary in case of blue collar employees. These are significant costs for any business to bear as a result of which it has been chiefly the Startups and the SME which have shown the greatest intent in reducing their hiring numbers for women.

Company size, management techniques, and the financials of the company all play an important role in how a company reacts to the changes specified in the Maternity Act. The report notes that large companies with modern HR practices are in a good position to accommodate both financial and talent implications of the move, and looking beyond the immediate effects (over a year), they might even be able to increase their women hiring numbers as such companies start becoming more attractive.

In case of smaller, younger, and more tightly knit companies, the report paints a grim picture. Mid-sized companies remain skeptical of managing the overhead expense of providing maternity benefits and while many have lauded the changes that the amendments have brought in, some state that it will lead to reductions in their demand for female talent. Young and innovative startups too find themselves in a tough spot. Although many have, in the last couple of years, brought innovative solutions to meet the needs of their employees, the financial implications of such a move will lead to many lowering their female hiring numbers.

SMEs [across both services and manufacturing] seem to have the most adverse reaction as the report states that in addition to reducing women being hired, many would also demand their future women hires to take lower salaries to make up for the company’s future investment in them. Also, the probability that employees availing of the benefit may not re-join the same company is also a major concern leading employers to consider the amendment as a hurdle.

According to an India spend report, only 27 percent of Indian women are currently in the workforce and a World Bank group report states that in the two decades preceding 2013, the percentage of India’s female population engaged in work fell from 34.8 percent to 27 percent, a number that’s one the lowest of its kind in the world today. Steps like amending the Maternity Care Act, although well intended in objectives, is evidently putting a lot of pressure on companies to ramp up their infrastructural and monetary maternity services. Those taking a long-term [beyond 4 years] view and possess the financial strength to tide over the short-term [up to 1 year] effects of the amendment are in favor of the amendment. Those not in favor of the amendment cite prohibitive costs, irreparable disruption to business operations, and post-maternity attrition costs as reasons. Since for many, the advantages can only be reaped in the long run, the threat of companies dropping their women hiring numbers is soon bound to become a reality. Not unless the government steps in and figures out alternative ways of helping companies fund the extended periods maternity leave.

How are you solving the skills gap in your organisation?

READ the October 2021 issue of our magazine to find out the skill transformation equation of global leaders.