Article: Virtual CHRO - The next gen HR for gig economy

The new world of work encompasses managing people who are not your permanent employees, motivating freelancers to be more productive, creating engagement for contract workforce, managing performance for contractors and a HR strategy without a retention plan.

Welcome to the Gig Economy. As you are reading this article there are about 200 million gig workers worldwide who are working for various projects and assignments for various organizations, big and small. (BCG and MSD Foundation report). Almost 70% organizations hired freelancers and gig workers to solve organizational issues.

In earlier days it was only the blue collar workers who were called daily wage earners and actually not even accounted for as far as the organizational people strategies are concerned. As times have passed, there has been a huge change in the workforce demographics and now almost 64% people are motivated to work what they want to do rather than a 9 to 6 job. Organizations are also increasingly getting interested in hiring gig workers for their critical needs.

Thus the role of HR also has been very dynamic in the last couple of years and especially in the pandemic situation. During Covid-19, a lot of organizations slowly moved to the gig economy for their manpower needs and there was a certain surge in doing assignment work. More organizations are now not looking to hire full time resources for roles which are not required to perform along the year. There has also been a big change in strategic decisions in keeping only the core functions as part of the organizations and outsourcing the rest of the functions.

As the manpower is dynamic , the HR function also has to be dynamic. The key roles of the virtual CHRO could be defined as below:

The role of a Virtual CHRO will be to administer and facilitate the entire project base hiring as per needs of the business and close deals with various gig workers. These deals will have a direct impact on project cost and thus a clear profitability can be derived out of HR function as per revenue generated per hire.

The entire project based hiring scenario has changed from traditional hiring. A sample process is shared below:

One of the core functions will be resource management. In most technology companies this was a key role , but with the birth of Virtual CHRO , for all organizations this will become a core function which will help the business to earn revenue. A smooth transition from on-boarding to off-boarding will be a key role of a Virtual CHRO. Interestingly the entire tradition of retention and employee management scenario changes with this gig economy. As sample process is shared below how resource management for a HR function can look like in this scenario 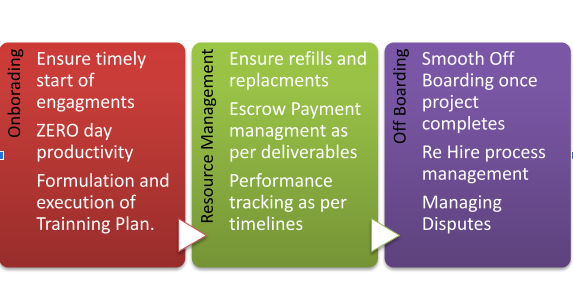 Building engagement, ownership and accountability in the short term requires immense strategy and policy formulations to keep everyone on their toes and as well as to build a super performing workforce. The role of advisory and managing hygiene will define the success of this model.

The question may arise, why virtual and why not full time HR. Virtual because this role is beyond boundaries and beyond time zones. Part time, because the business is dynamic thus the role is also dynamic and need also would be dynamic.

Thus, for the times to come, the role of a virtual CHRO will become more pertinent and relevant in the era of a gig economy.

Screening to Skilling: How Technology is shaping the talent landscape

How metaverse can significantly enhance learning experiences of working professionals

The algorithm that powers your employee value proposition