Article: 23% of organizations are not fully compliant with the PoSH Act: KelpHR

Since ‘The Sexual Harassment of Women at Workplace (Prevention, Prohibition, and Redressal) Act, 2013 came into existence five years ago, some organizations have implemented it with a lot of commitment whereas others have not. A survey by KelpHR was carried out to understand how effectively the Act has been implemented across corporate India and the gaps that still exist.  The survey also evaluated major reasons for low reporting and how organizations can work on improving their culture.

While there are only four simple steps to be compliant – Create, Setup, Ensure and Report, there are several companies which have shared gaps in the implementation of one or more of these steps.

200 people from across 160 companies responded to the survey, which was launched in April 2018 and closed by May 2018. The respondents were primarily HR Heads or professionals in the HR function, Internal Committee (IC) presiding officers or members, Legal heads, CXOs and so on. The profile of the respondents is also an indicator of the fact that very few leadership team members (9% CXO ’s; 45% HR and 23% of IC members who responded to the survey) chose to respond to the survey and this seems to be the core responsibility of HR. While ownership might lie there, the involvement and onus for the same should be higher within the leadership as well.

Here some key insights from the survey. Find the detailed survey findings here.

A worrying trend that is also emerging is the fact that the top two reasons for not reporting incidents is the fear of retaliation or loss of job and victim shaming. These are extremely serious concerns for an employee to have within the organization. It has a direct link to the company culture and also shows the lack of trust in the ICC. Addressing this should be a high priority for organizations if they want to become truly safe. Organizations have to ensure that they define steps that can affect the overall culture in a more positive manner. It is clear that organizations understand this and which is why 71% of them have shared that “Building a strong company culture” is the most common preventive measure to reduce complaints.

Companies are also realizing that social media related harassment (24%) in the form of Cyberstalking, Chat, and misuse of Photos seems to be on the rise and employees need to be sensitized on this.  A lot of loopholes exist when we review how this might be managed or dealt with, in the current setup. Also there is this big question on whether social media harassment occurrence are to be considered as occurring within the workplace or outside of the workplace and thus not in the scope of the Act.  Therefore, there is a need to find better ways to manage such incidents before they start becoming prevalent or a norm. 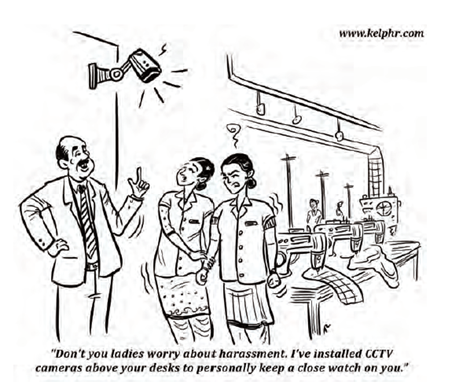 Viji Hari is the CEO and Co-Founder of KelpHR and the author of Behind Closed Cubicles (BCC) on how to deal with sexual harassment at the workplace.
NEXT STORY: 2018 FIFA World Cup: Lessons on team-building
Also Read: Excited for your office in the metaverse? Your workers – not so much
Also Read: Think Tank: Where leaders debate on work dilemmas in a fireside chat setup, only at People Matters TechHRIN 22

Why the metaverse could be ideal for behavioural training

Excited for your office in the metaverse? Your workers – not so much

Think Tank: Where leaders debate on work dilemmas in a fireside chat setup, only at People Matters TechHRIN 22

Get inspired by Rujuta Diwekar, Ranveer Brar on designing the perfect roadmap to wellness and employee engagement in modern workplaces