Article: How companies & the world can help fathers be closer to their families

Company leaders and managers need to plan such that flexible work options are available equally to women and men not just to new fathers in the form of paternity leave, but also to dads dealing with teenagers at home.

True partnership in child rearing would not only help women break more stereotypes and glass ceilings in the workplace, but also enable men to lead more caring and connected lives that they often have to sacrifice due to bindings at work.

Father's Day is an occasion to celebrate and spend time recounting the childhood memories with some of our favorite men, men who have shaped us more than any other — our fathers.

In our society, and in most of the world, we are still largely uncomfortable with the idea of the father, instead of the mother, as a lead parent. This is in spite of the fact that we know that fathers, like mothers, make loving and fully capable lead parents. Although no proof should be required for this, society can still use banal corroborations of brain research that men can be just as good primary parents when they are involved in daily caregiving activities. It had me wondering what our society could look like if more fathers felt comfortable taking on the mantle of lead parents, rather than presuming that that was the mothers’ forte (or a mother’s job), in which they could pitch-in at most but never dream of taking ownership?

According to research, women are far more likely to avail of paid or unpaid leave and flex-work option than men. In the absence of such policies, they cut back on work and end up taking career breaks while men continue to work. Certainly, the conflict is broadly and deeply more about societal attitudes and prejudices that presume that only mothers can (and should) take the primary responsibility of raising children and that a husband cannot earn less than his wife. It is discriminatory to women, and by extension, to men. When mixed with sexism, the rhetoric also depreciates the crucial responsibility that parenting is.

Academia is one of the few places which offers flexibility to parents. One of the most vocal accounts of a father’s lead parenting has been that of Andrew Moravczik, professor of Political Science at Princeton University who is married to think-tank president, former Princeton dean, and diplomat, Anne Marie Slaughter. He writes, that the “most fundamental reason for men to embrace a more egalitarian and open-ended distribution of family work is that doing so can foster a more diverse and fulfilling life. Polls suggest that men feel (at least) as great a conflict between work and family as women do. Both sexes are trapped in the same system, which has defined a one-dimensional role for each. By being a lead parent, men can get what many moms have long had—a very close relationship with their kids.”

Qualified young men and women start out with equal prospects and almost the same ambitions of what they want in terms of work and life outside work. Sociological studies show that millennial men — ages early 20s to early 30s — have more egalitarian views about income levels and family roles in a marriage compared to the previous generations. Certainly these are more idealized expectations as many of them are still finding themselves and navigating solo. “These are couples that are negotiating a work and family world grounded on an old model that really called for men to step up to the breadwinning role big time, and women to step back from employment and into more traditional roles,” NYT quoted Pamela Stone, a sociologist at Hunter College, New York.

Lack of family-friendly work policies is pushing them back into relatively traditional gender roles once they have children. Although male employees can now claim a paternity leave (of varying duration) in many companies, Moravczik points out that cultural barriers increase as children (and parents) age. “A dad in his 20s or 30s who takes some time off to care for an infant is adorable,” he writes, “But a dad in his 40s or 50s who limits his work schedule or professional ambition to attend to a teenager is suspect.”

A recent study conducted by researchers at IIM Ahmedabad and Biz Divas found that while flexi-work schedules and sabbatical policies in Indian companies are usually designed gender neutrally, individual biases of management do come into play there. One research participant shared that it is far more acceptable if a woman says she wants to take care of her child and therefore avail of the Work-from-Home option but when a male employee gives the same reason, it does not get accepted. Other studies also confirm that men feel harshly stigmatized by their companies and culture at large for wanting to spend more time with their children and less time at work.

Demarcating leaves and flexible schedules only to women, whether in policy or in attitude, not only generates a feeling of favoritism and discrimination among the male employees but also keeps them from venturing out of stereotypes of what men’s work should be like. Company leaders and managers need to plan such that flexible work options are available equally to men — not just to new fathers in the form of paternity leave, but also to dads dealing with teenagers at home.

Some progressive practices to reduce the impact of bias in policy implementation include establishing them as a right for individuals, rather than leaving that up to manager discretion. “We have turned flex policy on its head — in my organization, managers need to get permission from senior leadership if they want to refuse a request for flex-work, not to grant it.” shared a research participant from a prominent consulting company in the IIM-A study. The study found that when available, men also avail of sabbaticals and flexi-work options. Their reasons could still be different from that of women, but at least the options have to be made accessible and kept free of stigma.

Family-friendly, bias-free policies can be one big step forward is a world that still presents formidable psychological, cultural and social obstacles to fathers. If companies can take ownership of this idea, conduct awareness sessions and support their male workers, then it is possible to fast-track more productive, low-stress, balanced lives for all. 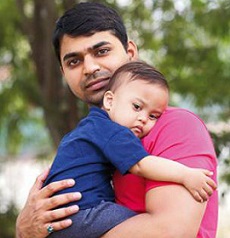 Albeit slowly, one realizes that attitudes are changing for the better, when stories like that of Adtiya Tiwari surface – who became India’s youngest single man to adopt his son after going to great lengths and struggling with a system that is biased against single parents, especially fathers.

True partnership in child rearing would not only help women break more stereotypes and glass ceilings in the workplace, but also enable men to lead more caring and connected lives that they often have to sacrifice due to bindings at work. It will also shape a well-rounded childhood and adolescence for their children.