For Amit, getting back to work after Diwali break was much difficult than he thought. It wasn't the holidays that made him reluctant to drive his way to office in Gurgaon, but it was the grey haze that made him anxious and slumberous.

See for yourself, the Air Quality Index over the week: 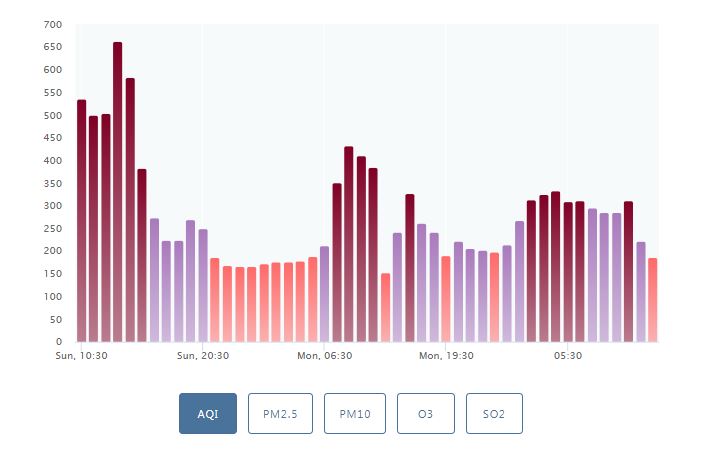 Gurgaon recorded an AQI of over 600 on Sunday

However, are Indian businesses taking air pollution seriously? Compiling evidence shows that air pollution is making your workforce not just sick but also less productive and more prone to error.

According to a World Health Organization research, air pollution costs the global economy $225 billion each year in lost labor income. Pollution and traffic congestion can disrupt daily business operations. According to another study it was also found that poor outdoor air quality is likely to have a consequential impact on job performance, even if employees work indoors at a desk.

Believe it or not, air pollution can significantly impact your research for the right talent. A research by Bain & Company and the American Chamber of Commerce in China found that 53 percent of American firms operating in Chinese cities have experienced difficulty in recruiting senior talent, with the majority blaming air pollution.

According to a study by the National University of Singapore, besides affecting health, prolonged exposure to air pollution can also reduce employee's productivity. The study also showed that daily variations in pollution level did not instantly affect the productivity of workers. However, a significant drop in output was witnessed when measured for more prolonged exposures of up to 30 days.

In addition to working in a highly polluted setting for long periods could affect your mood or disposition to work. One of the classiest examples is the investigation carried the professors from various universities like USC Marshall School of Business, University of California, and Columbia University studied the effect of air pollution on call-center workers at Ctrip, China's largest travel agency. Workers at Ctrip are knowledge workers; they spend their day not in a factory or on a farm but handling customers' phone calls. Their investigation found a robust relationship between daily air pollution levels and worker productivity. On an average, a 10-unit increase in the Air Quality Index (AQI) led to a 0.35 percent decline in the number of calls handled by a Ctrip worker. The finding suggests that workers are 5-6 percent more productive when air pollution levels are rated as good by the Environmental Protection Agency (AQI of 0–50) versus when they are rated as unhealthy (AQI of 150–200).

Due to ongoing smog in Delhi, companies like Hennes & Mauritz (H&M), Coca-Cola, KFC, and Dabur are either asking their staff to work out of home or are offering flexible timings as part of their contingency plans amid severe pollution in Delhi NCR. Gurgaon-based packaged foods company Nestle has equipped its field force with masks, is arranging an awareness session with a company doctor, and exploring the work from home option.

Noopur Jain, Director, HR & Admin, Tupperware India, on the measures taken by Tupperware to safeguard its employees against air pollution, shares, “We at Tupperware India believe that a healthy employee is an invaluable asset to any company. Delhi-NCR and surrounding areas across North India are struggling with poor air quality. Stepping out of home for work or other basic chores has become a challenge for residents. We at Tupperware India have always been highly considerate of the well-being of our employees – from offering flexible working hours, to the option of WorkFromHome, to installing air purifiers at our workplace, our brand has undertaken multiple measures in the past to keep our employees healthy and happy. Along with our employees’ health, we are also sensitive towards our environment’s health. Frequent plantation drives in the office and gifting plants on birthdays and work milestones is a norm at Tupperware India. To ensure that more employees opt for greener modes of travel, Tupperware also runs a free shuttle service from surrounding metro stations, which not only limits pollution but also offers convenience. We also shared health tips / advisories with our employees to cope with Delhi’s poor air quality.”

However, the current steps are short-term. Businesses need to be consistent with their initiatives in order to avoid business and talent loss due to air pollution. For example, encourage employees to use public transport or rideshare, rather than private transport. As per the Census of India 2011 data, every year, India's formal workforce travels 140 million kilometers by cars and two-wheelers. Shifting atleast a 10 percent of these kilometers traveled to public transport would significantly reduce air pollution.

Employee awareness programs is another  natural and a long-term strategy that businesses can adopt to combat air pollution. Many employees are not aware of how air pollution is affecting their health and how a small change in their behavior can help protect the environment. Additionally, there is little knowledge amongst many employees on air pollution, and the knowledge that exists is mainly superficial.

Anushree is an Assistant Manager- Content at People Matters. She holds an MBA in Human Resource Development from Delhi School of Economics. You can reach her at anushree.sharma@peoplematters.in linkedin.com/in/09anushree twitter: @AnushreeS09
NEXT STORY: How to future-proof your sales teams

HR priorities in the times of a pandemic

COVID-19: Agility will be the game changer

We want to make ‘working from anywhere’ a way of life: Sunita Rath