Now that working remotely has become a way of life for many, which of the world's cities are the best for working remotely from? A new study by Berlin-headquartered accommodation rental platform Nestpick attempts to quantify the characteristics that make a city friendly to remote work.

The study examines three factors that the authors believe are central to remote work, and ranks 75 major global cities based on how well they perform in all the categories.

The first category is costs and infrastructure, which encompasses the number of available accommodations in the city that are adequately sized for working from home, the cost of renting these accommodations, the quality and cost of an Internet connection in the city, and the amount of income tax a worker living in that city would have to pay.

Based on the findings, there is no such thing as a perfect city in this category: Rio de Janeiro, which has the lowest cost of all the cities studied, scores none too well on the quality of Internet connections, while Singapore and Hong Kong, which have some of the most costly accommodations, have low income tax and good Internet. And Reykjavik, with the best Internet connections available, imposes hefty tax rates.

The second category, legislation and freedoms, looks at how welcoming the cities are to foreigners looking to work remotely there. This includes tax and regulatory incentives, the support for basic human rights and freedoms, general safety, and notably, support for gender equality and inclusiveness for minorities.

The study found that only a handful of cities, located mainly in Europe, offer a digital nomad or freelancer visa, and a few others in Asia have announced forthcoming legislation. These cities—with the noticeable exception of Dubai—also score well on minority inclusion and LGBTQ rights. However, the findings also show that these cities do not necessarily offer tax or regulatory incentives to remote workers, nor are the incentives necessarily attractive even when offered.

For this category, Nestpick's study considered factors such as cost of living, healthcare, culture, weather, and pollution—and added the COVID-19 vaccination rate and how well the pandemic is controlled. Compared to just about every other factor examined, the cities studied scored much worse in vaccination rates and general pandemic control across the board, indicating the difficulty many continue to face in adapting to the public health crisis. Cities in the US tended to score higher on vaccination rates, however.

In contrast, most of the cities studied scored highly on their healthcare systems, with Canadian, Australian, and Japanese cities topping the ranks. Pollution control was also good in all the locations covered.

Finally, the study used the weighted average of scores across all categories to determine the overall ranking of the cities studied, and concluded that Melbourne is possibly the best city in the world for remote work and living, followed by Dubai and Sydney. 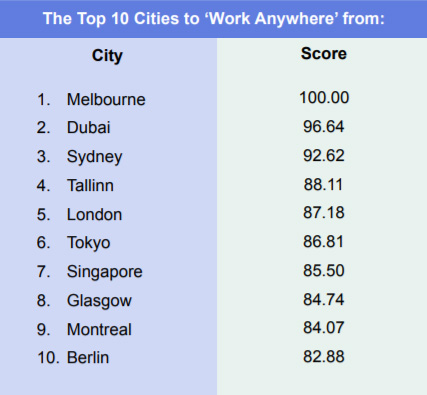 The weighted average method is far from perfect, however, given that Melbourne and Sydney lag far behind in vaccination rates while Dubai has the lowest score out of all 75 cities on gender equality and LGBTQ rights.

Omer Kucukdere, Founder and CEO of Nestpick, commented that cities which make the process of remote work seamless are more likely to attract high quality global talent, especially now that employees are paying attention to lifestyle and logistical factors as well as simple employment requirements.

He said: “In the past, one of the main reasons people relocated to a new city was employment. However, there are many other factors beyond work that are integral for those deciding to make a move, ranging from lifestyle preferences to logistical factors such as better healthcare and the cost of living. The increasing prevalence of remote working has opened up new possibilities that mean employees don’t necessarily have to choose between the place they desire to live in and their dream job, which is likely to increase employee satisfaction and retention going forward.”

Mint is working as a Senior Editor with People Matters. You can reach her at mint.kang@gopeoplematters.com
NEXT STORY: Here's how businesses can re-engage employees to improve their productivity and loyalty
Also Read: Performance Review: How to ace your chances of getting that pay raise
Also Read: Leaders vs Managers: What’s the difference between leadership and management?