Have you ever thought of the kind of dilemmas the so-called gig economy is creating? This relatively new phenomenon makes temporary positions and employment contracts more a rule than an exception. What is the impact of the gig economy on companies and employees, and what are the advantages and disadvantages that need to be reconciled?

Traditionally, employees had a job for life. Whereas the Baby Boomers and Generation X are used to mainly consecutive employment, there is a trend to the emergence of people (generation Y and Z) who opt for short-term paid jobs or jobs and thus create their own balance between work and private life. The gig economy has developed quite silently as a by-product of the on-demand economy; and in the meantime, one in three Americans is already working in the economy. On similar lines, in the Netherlands, this number is estimated to be one in seven working people for 2017. Though there is a denigrating way of talking about the gig economy, it is an increasing part of the global economy.

For us, a gig economy is an economy in which employees do not have a permanent employment contract, but work in the form of paid jobs or short-term employment contracts that are executed both in succession and in parallel. The gig economy is also called a platform economy. As such, it is a good metaphor from the American slang for a 'music performance', originally an abbreviation of 'engagement', which was conceived by black musicians in New Orleans. Currently, the word 'gig' in the United States is more broadly used as a term for 'short-term paid work'. One of the first dilemmas was well articulated by Hillary Clinton:

“Many Americans are making money, designing websites, selling products at their own car. This on-demand or so-called gig economy is creating exciting economies and unleashing innovation. But it is also raising questions about workplace protections and what a good job will look like in the future. "

So, on the one hand, we need a flexible and innovative workforce, whereas, on the other, we need to protect our workplace. It looks like this:

The gig economy is not sustainable if flexibility and innovation are not complemented by a few protection offerings by the workplace. What we see is the increasing need of youngsters (X and Z) to choose for their own career rather than the path that the organization has designed for them. And they are finding their stability in the profession that they choose and the instability in the organizations they use for developing their professional knowledge and experience. 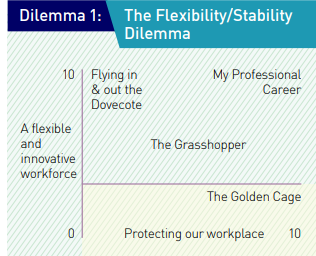 Questions of laws and regulations

As we are unfortunately used to in the business world, vision-free governments are again miles behind reality and have absolutely no answer to the 'gig economy'. In fact, the lousy socio-economic policies of the past few years are actually stimulating the gig economy in a perverse way. It is becoming increasingly difficult for companies to start up a company normally because they completely lose their way in the forest of regulations because of the lack of trust in the financial services industry. Labor laws, compliance regulations, and health insurance legislation mean that companies prefer to hire people than to offer them a permanent contract, while there is enough work! It causes a second dilemma that societies need to face and reconcile.

There are many companies that want and can grow, but they do not dare to hire people anymore. 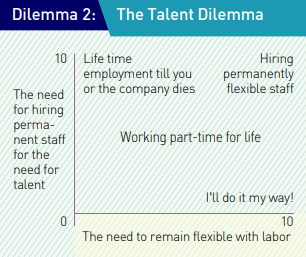 It seems like such a good idea: working when you want and can achieving an optimal balance between work and life. Work hard from time to time and recharge the battery. Because work is temporary, a high reimbursement is often given and if you do not like it, you just leave. You do the jobs where your passion and expertise lies and varies as much as you want and can. Delicious! I do the work I like and get paid for it. I can work anywhere with my laptop.

But there are also disadvantages: an irregular income, doing gigs under the price, maintaining the network and carrying out the administration. You also have to take care of your pension yourself and you will have to ensure yourself for legal assistance, medical expenses, disability to work and professional liability. In addition, especially when you work at home, you miss social contact with your colleagues. You might have earned a lot of money but after that bike accident you can no longer work and that money evaporates quickly. Every week, you need to eat with friends and family to survive. So we have to resolve the third dilemma if the gig economy is sustainable: 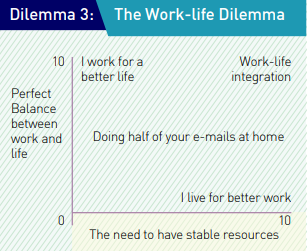 One way that this dilemma can be reconciled is to answer the question: How can work help you to get a more flexible life and how a set of gigs can give you stability in life’s resources? Dutch females are one of the largest groups of women in the world doing part-time work but the stability is given both by a growing economy and partners that work full-time. But it should give inspiration.

For employees, the gig economy provides a window of possibilities, yet at the same time, it also poses a huge threat. Location-independent work and the ever-growing process of globalization means that competitors are increasingly the people abroad. Gig workers constantly have to update their knowledge because the specialists of today are the dinosaurs of tomorrow. Building a network is crucial to survive as a gigger, and furthermore, you are as good as your last assignment. Direct feedback on gig platforms means that you cannot make too many mistakes; otherwise, your reputation will end. Furthermore, it is necessary to carry out a number of administrative matters yourself. This leads to the fourth opportunity and threat dilemma: 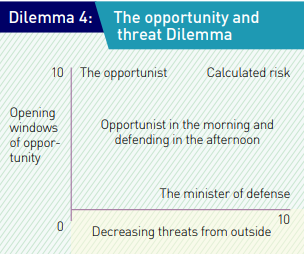 For companies, the gig economy offers the possibility to deploy real specialists for demarcated jobs. The HR departments usually maintain records of proven specialists who are often hired for short-term projects or assignments. However, the disadvantage for companies is that it is difficult to retain good people who usually become more expensive to hire if asked frequently. In this respect, the gig economy empowers people to shape their own destiny and leverage their existing assets to their benefit.

There are new paradigms evolving where clusters of people unite in a “pool of competence” from which organizations can demand certain types of reliable and experienced staff who know the industry. Temporary staff organizations are setting-up such pools and reconciling with the need to quickly deploy specialists without losing the quality and commitment one needs for certain jobs. 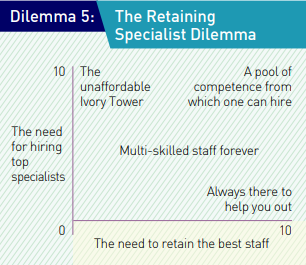 In order to reconcile the dilemmas above, we need to create a culture that stimulates the individual workers, companies, and governments to bring the opposites together.

Fons Trompenaars is a Dutch-French organizational theorist, management consultant, and authorin the field of cross-cultural communication, who developed the 7Dimension of Culture model forlooking at national culture differences.
NEXT STORY: Interview: Manish Verma on differentiated approach to progress
Also Read: Here's what Bill Gates would advise his younger self
Also Read: Inside a tech giant’s family-friendly work culture

Digital Dilemma: Most companies yet to embark on digital transformation journey

Here's what Bill Gates would advise his younger self

Corporate yoga: the mantra to a driven workforce