Article: Hiring to remain steady in Q3 but pace slower than last year

Indian employers report respectable hiring intentions for the July-September time frame. With 16% of employers anticipating an increase in staffing levels, 1% forecasting a decrease and 61% expecting no change, the resulting Net Employment Outlook is +15%. This figure is derived by taking the percentage of employers anticipating total employment to increase and subtracting from this the percentage expecting to see a decrease in employment at their location in the next quarter. The result of this calculation is the Net Employment Outlook. Once the data is adjusted to allow for seasonal variation, the Outlook stands at +14%.

Although India’s outlook is comparatively optimistic when measured against the majority of countries and territories participating in the survey, the third-quarter forecast (July-September time frame) is the least optimistic since the survey was launched in 2005.

In the wake of uncertainties in global markets, employers in India are adopting a wait-and-watch policy. This is probably the reason we are not seeing them commit to the same optimistic hiring plans. Hiring is primarily driven by sectors such as wholesale and retail trade, transportation and utilities and services where employer-hiring sentiment appears to be better,” said A G Rao, Group Managing Director of ManpowerGroup India.

Since technology has restructured the way the world functions and organizations are embracing these technologies depending on the changing business requirements. Rao said, that it is important for Indian employers to redefine their workforce strategies and adopt innovative ways to leverage the strength of their employees and stat competitive in this volatile economy.

The ManpowerGroup Employment Outlook Survey for the third quarter 2017 was conducted by interviewing a representative sample of 4,910 employers in India. All survey participants were asked, “How do you anticipate total employment at your location to change in the three months to the end of September 2017 as compared to the current quarter?”

Employers in all seven industry sectors expect to increase staffing levels during the July-September period. The strongest labour markets are forecast in the Wholesale & Retail Trade sector where the Net Employment Outlook is +20%, and in the Public Administration & Education sector with an Outlook of +19%. Elsewhere, employers report favourable hiring prospects in the Transportation & Utilities sector and the Services sector, with Outlooks of +16% and +15%, respectively. Meanwhile the most cautious Outlook for 3Q 2017 is reported by Manufacturing sector employers, standing at +9%. Outlook of Finance, Insurance and Real Estate sectors stands at 11% and Mining and Construction at 13%. 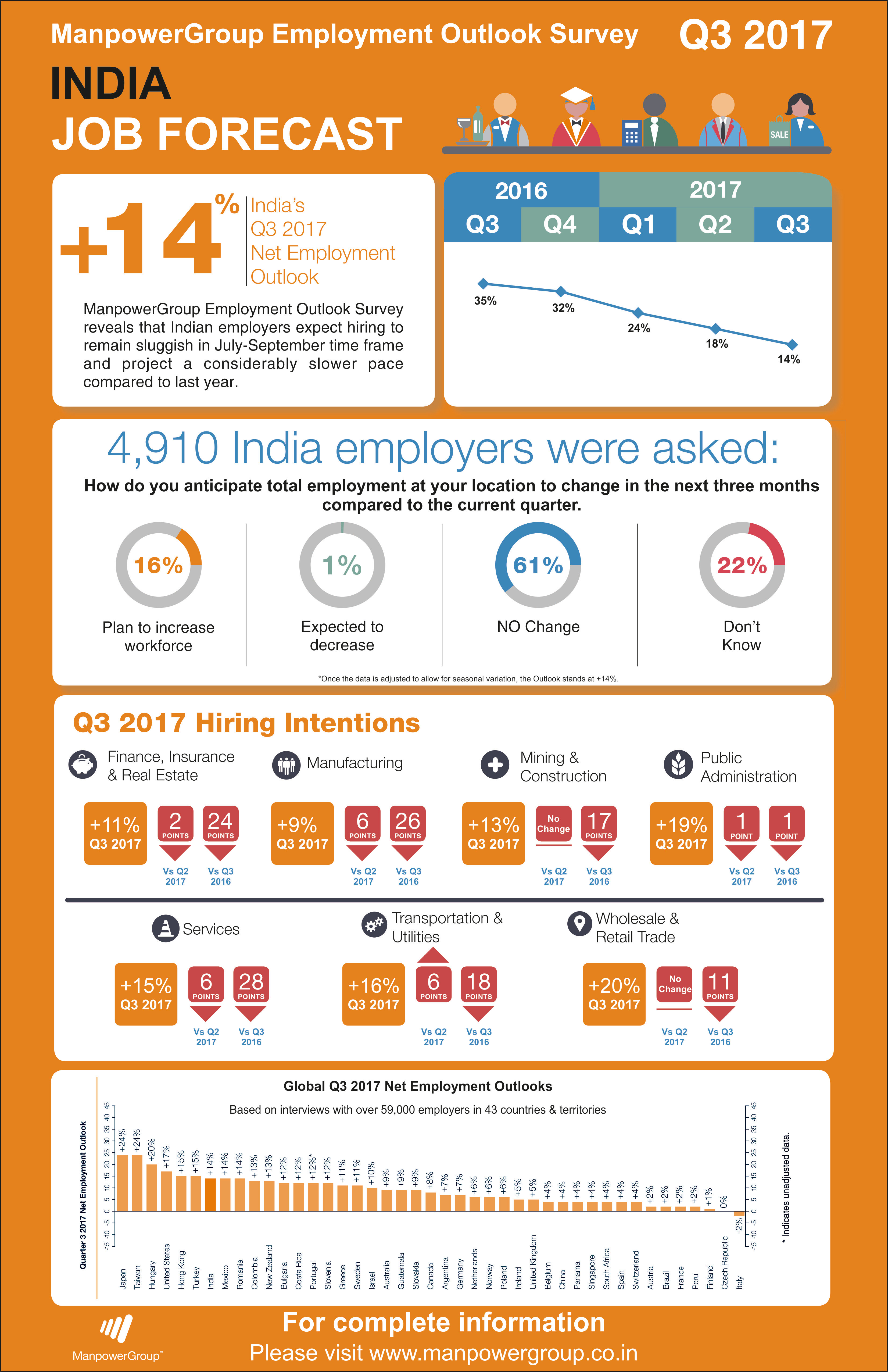 When compared with the previous quarter, hiring intentions weaken in four of the six industry sectors, most notably by 6 percentage points in both the Manufacturing sector and the Services sector. However, the Outlook for the Transportation & Utilities sector improves by 6 percentage points.

Employers in all four regions expect to increase staffing levels in 3Q 2017. The strongest labor market is forecast in the South, where the Net Employment Outlook stands at +21%. Employers in the North report steady hiring intentions with an Outlook of +15%, while Outlooks of +10% and +9% are reported in the West and the East, respectively.

When compared with the previous quarter, hiring plans weaken in three of the four regions, most notably by 6 percentage points in the South. Elsewhere, hiring intentions decline by 3 percentage points in both the East and the West, but employers in the North report no change.

Year-over-year, Outlooks weaken in all four regions. Sharp decreases of 27 and 24 percentage points are reported in the West and the North, respectively. Employers also report considerably weaker hiring intentions in the East, with a decline of 15 percentage points, and in the South where the Outlook is 12 percentage points weaker.

The forecast indicates payrolls will grow by varying degrees in 41 of 43 countries and territories over the next three months. An overview of the global results indicates employer confidence is similar to that reported in the second quarter with the majority of respondents’ content to either retain current staff or grow payrolls marginally as they await more definitive signals from the marketplace.

Some employers expect to encounter headwinds in the coming months. For instance, employer confidence in India dips to its least optimistic level since their survey was launched. Similarly, forecasts in Panama and Peru are the weakest reported since their surveys began, while job prospects in Singapore decline to a level not seen since the recession. Conversely, the forecast in Brazil has improved steadily for four consecutive quarters and Brazilian employers report positive hiring plans for the first time in more than two years.

When compared to the prior quarter’s results, forecasts improve in 17 countries and territories, decline in 16 and remain unchanged in 10. However, a more confident pattern emerges when forecasts are compared with last year at this time as hiring intentions improve in 26 countries, decline in only 15 and remain unchanged in two. Globally, the strongest third-quarter hiring plans are reported in Japan, Taiwan, Hungary and the United States. The weakest forecasts are reported in Italy, the Czech Republic and Finland.

In the Europe, Middle East & Africa (EMEA) region workforce gains are forecast in 23 of 25 countries. Hiring plans improve in nine countries quarter-over-quarter, weaken in 10 and are unchanged in six. In a year-over-year comparison, Outlooks improve in 15 countries and decline in 10. Hungarian job seekers can expect the region’s strongest third-quarter hiring plans. Additionally, the outlook in Turkey rebounds with more than one in every four employers planning to add to their payrolls in the next three months. Italian employers report the region’s weakest outlook as well as the only negative hiring intentions among the 43 countries and territories surveyed.

Positive Outlooks are reported in each of the 10 countries surveyed in the Americas. Hiring confidence strengthens in six countries, dips in three and is unchanged in done when compared to the April-June quarter. Similarly, the year-over-year comparison reveals employers in six countries report improved hiring prospects, while hiring plans weaken in three and are unchanged in one. For the fourth consecutive quarter employers in the United States report the strongest hiring plans in the Americas, while opportunities for job seekers are expected to be weakest in Brazil, Peru and Panama.

You can read the full report here

Shalini Sengupta is the Former Assistant Manager – Content at People Matters.
NEXT STORY: Employee experience is at the core of culture
Also Read: Assessments will be increasingly crucial to the hiring process in the future of work: MeritTrac’s Dr Bijan Roy
Also Read: How HR leaders can do more to help organisations thrive

Assessments will be increasingly crucial to the hiring process in the future of work: MeritTrac’s Dr Bijan Roy