Article: Is it time to split the HR?

New CHRO would also have to be a senior LEHR leader with strong people development skills. This means that the existing “traditional head of HR” has to be moved out

To attract good leaders to these new roles, the CEO and the LE CHRO must clearly define the objectives, KPIs, career roadmap for LO and the type of interventions these roles would play

This proposal is based on his wide experiences and sharp observations that CHROs:

Therefore, the organization structure he has suggested is reflected in Model A (as shown in figure below). But the model I would suggest is, wherein “Traditional CHRO” is replaced by “LE-CHRO” (as shown  as Model B in the figure)

Here, LO team would be anchored with high potential professionals who have quality experience in any of the line functions like sales, manufacturing,  project management etc., Let us call these experienced line functional experts who move into LO as LEHR (Line Experienced HR) professionals.

New CHRO would also have to be a senior LEHR leader with strong people development skills. This means that the existing “Traditional head of HR” has to be moved out.

Let us analyze how Model B would be more advantageous compared to Model A:

After a specified time-frame LO team members may go back to line functions so as to enable other line managers to get LO opportunity and in the process the rotation would widen their cross functional skills resulting in strengthening organization’s leadership pipeline. 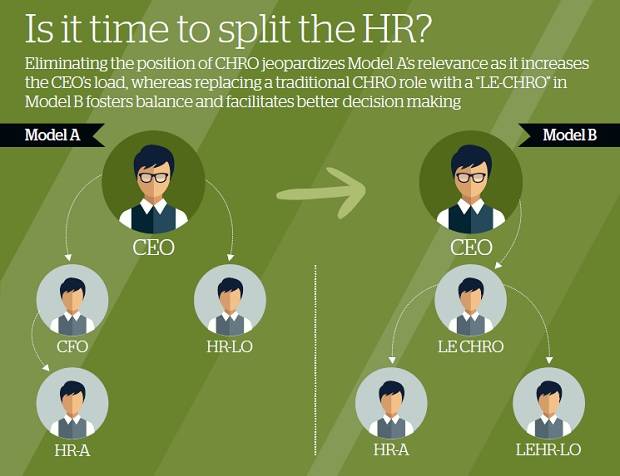 Now let us see what challenges this model would have to overcome when a corporate entity tries to adopt this model:

Overall, model B would be better placed in achieving the objective of HR in contributing to the success of the organizations significantly.