The WEF Jobs Summit came to a close yesterday with another day full of discussion, practical solutions to building a pathway to a better future and paving the way to provide more inclusive opportunities in the new economy. On Day 4, speakers homed in on equity and resetting the social contract, tackling issues such as racial justice, LGBTI inclusion, gender parity, and how businesses can be more inclusive of people with disabilities.

Here are some highlights from the fourth and final day of the WEF Summit:

Katherine Bell, Editor-in-Chief, Quartz Media Inc. moderated the session on ‘Transforming Equity, Inclusion and Social Justice,’ looking into ways we can tackle inequality in the workplace and beyond.

Maya Roy, CEO of YWCA Canada, said decisions must be made off the basis of data. “As leaders right now we’re all being tested and the decisions we’re making today will be studied for generations to come,” she said. For this reason, at YWCA Canada, they’re centering the most marginalized members of society and using data to drive evidence-based policy making.

Caroline Casey, Founder and Director, The Valuable 500, a global movement putting disability on the business leadership agenda, said that leaders make choices and those choices are what ultimately build company culture. Moving forwards, we must focus on what unites us, rather than what makes us different from one another, she said. “We need to implicitly build an understanding of our interconnectedness as human beings, right across the planet, across society, across industries,” Casey said. 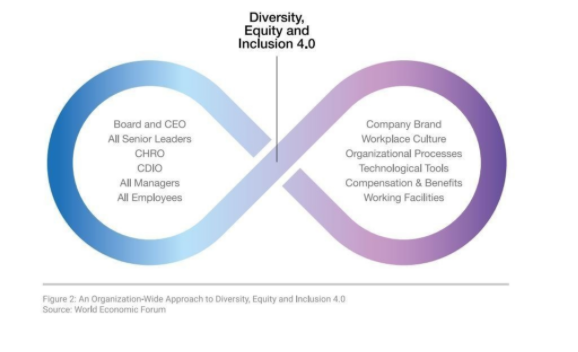 Decisive action must be taken to combat disparity, discrimination and exclusion of all kinds at every level of business. AARP CEO Jo Ann Jenkins, for example, described how the organisation are battling age discrimination, noting that over 1000 companies have signed up to their AARP Employer Pledge not to discriminate against anyone due to their age. “As part of that, they commit to a recruitment process that includes age diversity and what COVID has brought to the forefront is it’s a lot easier for older people to do the work when it doesn’t involve commuting,” Jenkins added.

A New Vision for Leadership in the Great Reset

All of these social resets and developments towards equality depend on good leadership. For meaningful change to occur, we not only need strong and determined decision-makers, but also leaders who are also willing to listen and make choices based on what’s best for the populations these decisions ultimately impact.

Herminia Ibarra, Charles Handy Chair in Organizational Behaviour at the London Business School, led a panel entitled ‘A New Vision for Leadership in the Great Reset.’ Ibarra began by asking attendees which top two leadership characteristics they would expect to see from a leader. The majority of respondents (63%) said they would expect to see more empathetic leadership, followed by decisive (47%), transparent (35%), collaborative (31%) and - way down at the bottom - persuasive leadership, which only garnered 8% of the vote.

Commenting on the kind of leadership we need to negotiate the fallouts from the pandemic, Jill

Ader, Chairwoman of Egon Zehnder, said it’s about “navigating with very human answers,” adding that we’re seeing “an incredible melting pot of things that are affecting us from the pandemic, causing a meltdown in some leaders while others are rising to the occasion and shining.” Ader added that we’ll likely be seeing more demand for leaders, but less supply.

Move from ‘Perform’ to ‘Transform’

“Leaders who are able to move from stuckness or being a crisis manager, to knowing they are holding an organisation and breathing life and safety into an organisation, that makes a huge difference,” said Ader, emphasising how leaders should recognise the sway and influence they have, particularly in times of crisis.

Stakeholder capitalism was a recurring theme throughout the summit. Commenting on this, Vijay Eswaran, Executive Chairman of the QI group, said he would have added “integrity” to the list of important leadership traits included in the poll. “Survival of the fittest doesn’t fit into the kind of leadership I would subscribe to,” Eswaran said, adding that the worst possible type of leader for now would be a combination of “decisive” and “persuasive.”

Eswaran believes that leaders today need to be able to relate to the people they are leading. “Honest leadership requires you to admit and deal with the mistakes you’re going to make,” he said. Accountability, honesty and transparency are more important in the New Normal than leaders making swift decisions and never admitting they’re at fault.

“Stakeholder capitalism requires us to be aware of the other stakeholders in everything you do,” Eswaran said. “Your employees, for example, and it’s people that are going to make the difference moving ahead.” Leaders should make an investment in these stakeholders through reskilling, retooling, training and market research both online and offline.

“Trust in institutions across the world - government institutions, businesses, even NGOs and the media have been crushed over the last number of years,” Gallagher said, and populations are growing weary and tired of growing social inequalities.

It’s no coincidence that the countries with the highest trust index also have the lowest inequalities. “Once you focus on trust, the way to sustain it is through people-designed systems,” adding that the pandemic has “laid bare” how short these systems have fallen and ultimately failed the people they were designed to serve.

Gallagher cites the example of Salesforce founder and CEO, Marc Benioff, who threw his support behind a referendum that would increase taxation on their business in order to directly help the chronically homeless populations of San Francisco. “That’s putting people first,” Gallagher said. “For a corporate leader to say ‘we should be taxed more to provide support for folks who are homeless on the street’ is the kind of leadership behaviour that builds trust and confidence.”

Everything needs to be collaborative now, Gallagher said, and if we’re not building systems that benefit our employees, our citizens and our people, these systems will ultimately fail.

The final day of the WEF Jobs Summit left attendees with much to consider with regards to how we now move forwards. Overall, there was a sense that the Great Reset provides the world with a great opportunity to refashion a world that’s truly inclusive, truly diverse and truly committed to addressing deep-seated and longstanding inequities. The success of this endeavour will depend on trust-building, acclerating collaboration, selfless leadership and a forward-facing optimism in the wake of one of the biggest challenges the world has ever faced.

Maia Jenkins is a writer and teacher based in the United States. She has written for various publications, including British GQ, the Threepenny Review and Grazia. She is also winner of a Pushcart Prize.
NEXT STORY: Trends impacting the staffing industry in the post-COVID19
Also Read: Layoffs continue: Dell to kick out nearly 7000 employees as demand for PCs drops
Also Read: Crypto layoff: Chainalysis, Protocol Labs and Bittrex to begin firing employees

Layoffs continue: Dell to kick out nearly 7000 employees as demand for PCs drops