Article: Are we people-ready for the Fourth Industrial Revolution in India?

The Fourth Industrial Revolution seems to be at the doorstep. Industrial Federations, Industrial Corporations, are talking about the urgency to be prepared with the forthcoming challenge. Big Data, IoT and Machine Learning seem to be the buzzwords.

Much talked about Industrial Revolution (IR)?

To flash back on 1st Industrial Revolution – it gave birth to Mechanical Economy e.g. Steam Engines and mechanisation invented. 2nd IR characterised by Industrial Economy – e.g. Invention of combustion engine, electricity, steel and the likes. 3rd IR, which is our present, known as the Information Economy, brought about breakthroughs like microprocessor, computers, Internet etc.

Fourth IR poses a fundamental shift in looking at leading and managing change. Unlike proven change transformation models of yesteryears, it is based on the belief that technology is accelerating the rate of change and propelling human progress.

What does it mean to us in the here and now?

World Economic Forum (WEF) report suggests that India ventured into multiple areas, including textiles and the leather industry, with a focus on areas that required manual hard work. However, it was the very mindset of cheap labour that was the flaw back then. In fact, India was counted among the most unproductive of markets. Invested areas including the textile business and leather industry all lost out to countries like China, South Korea and Bangladesh.

When India changed its focus from cheap labour to a skilled workforce, technology and capital-intensive sectors, it became more competitive.

As per FICCI’s report on 5 megatrends on the 21st century and beyond,  in India too intelligent technologies are making major, disruptive changes to industries and sectors, and to our lives.

If Fourth Revolution is a given, and is just a matter of time, then are we really prepared in terms of our people capabilities? Is it right to spell people capability as Skilling and Employability?  Daniel Pink in his book, ‘A Whole New mind’ says that 3As are the future going forward - Asia, Abundance and Automation will rule the world. While Automation and Fourth Industrial Revolution are allied in their impact and implication on India, what’s happening with other prominent nations in Asia viz. Korea, Japan, Singapore – the evolved developed countries vis-a-vis the emerging markets such as India and China? Similarly, the Governments and the Federal structures of the 3 developed nations are playing a proactive and progressive role in dealing with capability challenges.

In an article written by Anastasia Kalinina, Head of Eurasia, World Economic Forum Geneva, the chart below describes how Russia and Government is calibrating itself w.r.t Education & Training policies as also Labour market flexibility & use of talent against other progressive nations. 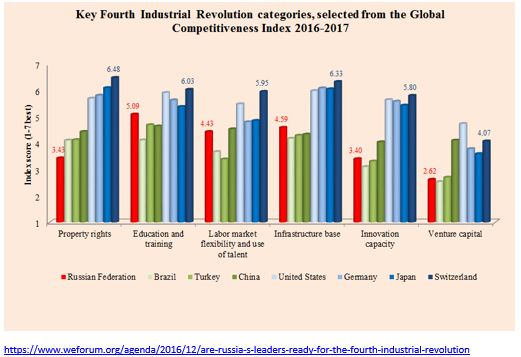 China, with its large un/semi-skilled population base focussed on lower secondary level education while India traditionally prioritised tertiary education and only in ‘90’s did the Indian Government promote universal basic education. India today not only has a supply problem of quality skilled and employable people but also has the demand challenge of economic and industrial growth in terms of rise in employment opportunities.

While younger Indian population demographics look favourable, quality of this youth needs to be channelized. Corporates therefore, play an important role in bridging the skill & academia gap for the nation (Ref. Future of Work and Labour report by McKinsey Global Institute). Corporate universities, HR functions and CSR arms need to strengthen the entire value chain. It is time we looked at this situation from a Systemic adaption perspective than just an organisation priority. Industry Consortiums can help strengthen the entire value chain right from the end-user point to retailer, manufacturer, supplier and social ecosystem.

L&D needs to be looked at from a systemic change point of view than just an Organisational / Individual Learning. Established corporates play a much bigger role in terms of contributing revolutionary practices making a dent in the industry (Ref. KPMG report on Industry 4.0; http://marketrealist.com/2016/01/fourth-industrial-revolution-need-know/).

With Automation and networked organisations, routine transactional operations will get automated. More Siri’s and Cortanas will emerge for the industrial use. How will the human resource utilisation happen? Will our people be able to adapt to the newer skillsets to be acquired? Going forward, right-brained skills and algorithmic skills will be in demand, such as Big Data, Ideating, Strategic Ideation, Design Thinking, Building and integrating concepts to product/service making, Coaching / Mentoring and so on. The experienced Gen X will be most impacted since this requires a whole new mindset. Gone are the days when the younger generation had to adapt to the older – it is them who will need to align and adapt to the changing technologies, faster ways of working w.r.t the Millennials, redefine their own value systems and cultural norms. With increasing longevity and life expectancy standards, all the more necessary for the Gen X to rediscover their passion and second career options. The key question that a Gen X needs to ask oneself is – “With the increased longevity, how do I sustain myself intellectually and economically?” (Ref. http://leadership.mit.edu/technology-the-fourth-industrial-revolution/)

While India and Corporates look at skilling the Indian Youth, we may also have to consider channelizing the experienced talent (who are a repository of tacit knowledge and skills) into second careers, entrepreneurs or consultants. With automation happening, organisations will become leaner in their structures and more matrix in their working styles. The Gen X will be in the higher salary brackets, rich in experience and high on cost liability.

It’s time we questioned ourselves on :

Learning is not just into classrooms or digital, it is by way of collaboration, communities and much more… 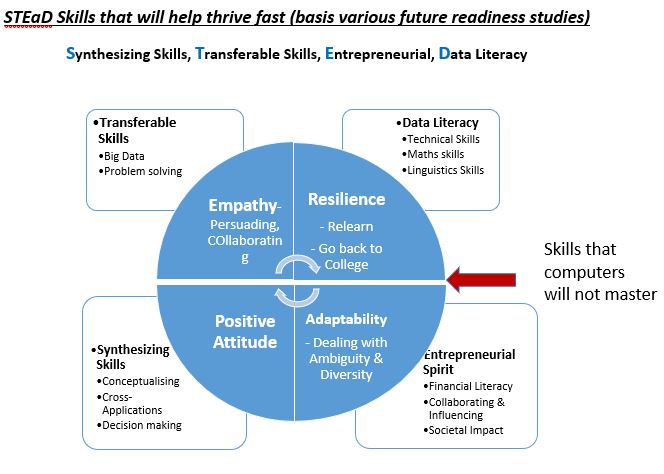 In order to grow in the Fourth Industrial Revolution, Learn to challenge the 4Cs of the Mind:

Collaborate: with gender, age and other diversities suddenly becomes very important. Diversity and inclusion will no longer remain only a conference room discussion restricted to gender, age and physically challenged but a livelihood sustenance need.

Customer Experience and Self:

Culture: Hofstede may need to revisit his organisation culture study on power distances in developing nations. With the rise of Millennial in the workforce, Indian culture definition of respecting the elderly may undergo change.

Loyalty to Industry – Companies like Google seem to be omnipresent. With AI, Machine Learning and Big Data, the redefining of Industry may happen. Products will be more integrated than ever. It’s not the accessories that will fetch a higher price for car but the overall customer experience in driving in a driver-less car that will matter. In all probability, an individual may not own a driver and a car going forward.

Learning at a rate faster than change is critical – why are companies like Google and Apple flourishing?

As Chairman Schwab of WEF says, “It is difficult to foresee which scenario is likely to emerge, however, one thing is certain—that in the future, talent, more than capital, will represent the critical factor of production. This will give rise to a job market increasingly segregated into “low-skill/low-pay” and “high-skill/high-pay” segments, which in turn will lead to an increase in social tensions.” (Ref. WEF Report of Fourth Industrial Revolution)

The only constant which will remain is the saying ‘Shape up or Ship Out’.

Sampada Inamdar is the Dean - Anand Corporate University and also is the Advisory Board Member at GlobalCCU
NEXT STORY: How to demonstrate respect for your employees

Strategies managers must employ in the age of continuous disruption