As the clock strikes Brexit time on March 29, global businesses based in the UK are gearing up to launch their contingency plans. Since 2016, the automotive industry in the UK, in particular, has been lined with shut down of plants and job cuts in light of the looming uncertainty.

The outcome of Brexit becomes more blurry than ever after the UK Parliament voted against any deal with EU. In a recent series of developments, the Members of the Parliament of the UK have voted to take over the control of the upcoming Brexit.

Amidst the political turmoil,  the UK Prime Minister Theresa May quite recently offered up her resignation if the MPs were to accept her Brexit deal. Whether this move would materialize or alter the course of trading laws between the UK, Europe and rest of the world, only time will tell.

Even though the UK’s exit from the EU seems imminent, the question remains whether all the parties involved would be able to strike a deal to decide how trading across borders would work. Businesses in the UK and EU are starting to prepare for both scenarios wherein there might be ‘no deal’ or ‘deal’ when it comes to trade talks.

PwC has advised business leaders to prepare for the worst and kick-in their contingency plans in order to curtail the disruption.

In the scenario where the UK Parliament does not approve the exit deal, the UK’s exit from the EU would be immediate and disruptive i.e. without a transition phase and most importantly for businesses, without any prior trade arrangements, according to a PwC report on Brexit.

In light of the recent back and forth between Theresa May’s government and the Members of Parliament (MPs), earlier this week, the MPs voted in favor of an amendment that would give them greater control over the Parliament’s agenda and set the stage for them to vote on a multitude of alternative options and withdrawal agreements.

Lawmakers could potentially vote for seven different types of Brexit scenarios ranging from a second referendum or exiting the EU with “no-deal” or even a midway compromise wherein Britain can continue to access the EU market and be a part of the free trade zone with Europe. 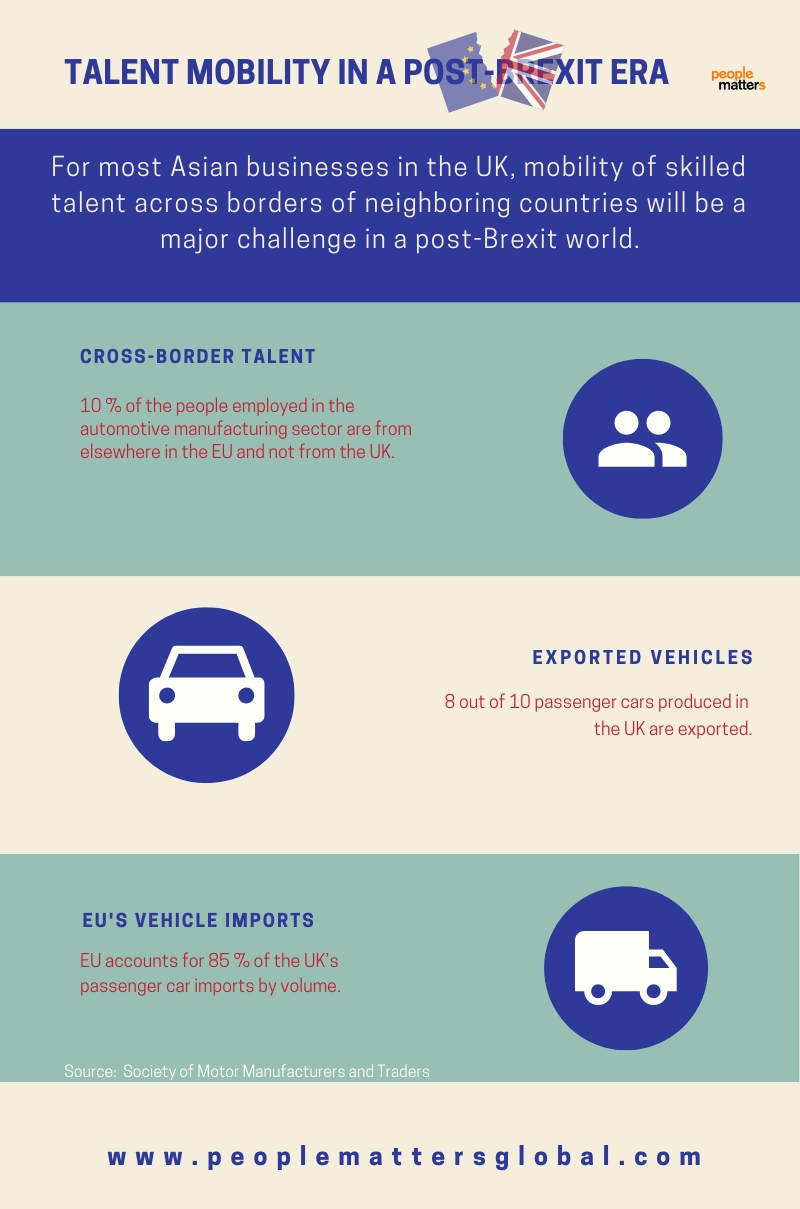 Impact on Asian businesses in the UK

Asian companies who have firms set up in the UK are gearing up for a situation wherein mobility would be restricted across borders of other EU countries. In sectors such as the automotive industry, wherein the number of cars exported is higher than the domestic demand, border restrictions are going to have a major impact on the operations of these companies.

Over the past year, several big names such as Japanese car makers including Nissan and Honda have announced thousands of job cuts and temporary closings of their UK-based manufacturing plants.

Industrial output is falling and jobs are being lost, with Honda joining the recent spat of auto giants pulling out of the once Great Britain.

About 3,500 jobs will be cut by 2021 after a closure of Honda’s only British car plant based in Swindon. At present, about 90 percent of the vehicles manufactured in the plant are exported to other countries in the EU and US.

“While production will continue in Swindon until 2021, giving government and industry time to help affected employees and the local supply chain which supports a further 10,000 jobs, this is, nevertheless, devastating news,” said Mike Hawes, Chief Executive of the Society of Motor Manufacturers & Traders (SMMT).

In light of a ‘no deal’ Brexit, Nissan also announced the cancelation of its plans to build the X-Trail sports utility vehicle in Britain. Additionally, Jaguar Land Rover had said they would be slashing their workforce by 10 percent because of a dip in demand from China and the uncertain diesel market in Europe.

“The challenges facing Honda are not unique,” said Hawes. “The global automotive industry is facing fundamental changes: technological, commercial and environmental, as well as escalating trade tensions, and all manufacturers are facing difficult decisions.”

At least 10 percent of the people employed in the automotive manufacturing sector are from elsewhere in the EU and not the UK, according to the Society of Motor Manufacturers & Traders (SMMT) data.

“A strong local supply chain is the backbone of any manufacturing sector, and ours has thrived thanks to massive reshoring efforts and the ability to trade freely and frictionlessly with the EU,” Hawes said.

Unrestricted access to the EU market was one of the many perks of doing business based out of the UK. However, in a post-Brexit world with the looming ‘no-deal’ Brexit, carmakers are looking to get out of the additional tariffs that would affect the costs of the vehicles.

According to the SMMT, EU tariffs on cars alone might add an additional 2.7 Bn pounds to cost in imports and 1.8 Bn pounds to exports. The import tariffs could lead to a hike in the price of cars brought into the UK from the rest of the EU by about 1,500 pounds.

In December 2018, Jaguar Land Rover announced that it would be restructuring the workforce in the UK as a part of a three-year cost-cutting program. Earlier last year, the company planned to improve cash flow by about 2.5 billion pounds within a period of 18 months.

It is yet to be seen how individual car brands and their retail supply networks are able to absorb these additional costs or if they have to transfer them over to the end customer.

The Tata Motors’ owned Jaguar Land Rover also shut down the UK plant for two weeks in October of last year citing declined sales from China caused due to uncertainty surrounding the import duty charges and trade tensions. These tensions stemmed from the unpredictability surrounding Brexit.

Back in 2016 right after the Brexit vote, a spokesperson for Tata Group had reiterated the importance of each company reviewing its strategy. He echoed the market sentiment that the jobs in the automotive sector will now move from manufacturing-related to technology and engineering. Easy access to global markets and a highly-skilled workforce will be guiding philosophy for most companies during this time of uncertainty.

Asian companies such as Toyota, Hitachi, Samsung, Panasonic, TCS, Tech Mahindra, Honda, and Tata have a widespread presence in the UK. They have to now chalk out their plan of action in a post-Brexit world.

For UK advanced manufacturing there is a shortage of qualified scientists, engineers, and technologists. Government and industry need to urgently address this skills gap, according to a statement by SMMT.

On the other hand, some experts say that since just a little over 50 percent of the UK’s foreign trade is being conducted as per the World Trade Organization’s terms, the ‘no-deal’ Brexit didn’t have to spell such a doom.

Large-scale job cuts in the manufacturing sector spell impending doom for traditional professions in the automotive industry. It is therefore crucial for enterprises to look towards digital transformation, innovation in self-driving vehicles and start creating new job profiles.

For most Asian businesses in the UK, the mobility of skilled talent across borders of neighboring countries will be a major challenge in a post-Brexit world. However, diverting these jobs elsewhere and restructuring the organizational set-up in order to create a pipeline for innovations continues to be a key priority. It would greatly benefit many talent leaders to take a leaf out of these automakers’ book and be prepared with contingency plans to brave the winds of change--technological, environmental or political.

Vallari is working as a Features Writer with People Matters. You can reach out to her via vallari.gupte@peoplematters.in
NEXT STORY: 5 essential factors that make a leadership program scalable
Also Read: The emphasis should be on becoming enablers, not simply consumers of talent: Intuit’s Jharna Thammaiah K
Also Read: Skills over degrees: How can businesses overcome the industry-skills mismatch for Tech Talent?

The emphasis should be on becoming enablers, not simply consumers of talent: Intuit’s Jharna Thammaiah K

Skills over degrees: How can businesses overcome the industry-skills mismatch for Tech Talent?

6 signs you're at risk of a layoff