Article: 'H1-B' Visa amendments: Will it affect professionals working in US?

The new US government has been adamant on the issue, the Indian companies have been anticipating it and the immigrants have been dreading it. It has been the most anticipated affair of the year after the most astounding event of the American politics that involved Trump becoming the President of the USA – this is about the reintroduction of the H1-B visa bill in the US Congress. This is the bill that got stalled due to stiff opposition during the Obama administration last year. However, with Trump vehemently proposing the changes in the H1B visa program, the bill has been reintroduced and has received significant limelight.

In a bid to tighten the visa law and ceasing the subcontracting the American jobs, the Republican lawmaker Darrell Issa with co-sponsorship by Democrat Rep. Scott Peters introduced the "Protect and Grow American Jobs Act". The proposed bill is stipulated to make notable changes to the eligibility requirements of H1B visa exemptions, increase the required salaries that replace American workers from $60,000 to $100,000 per year, eliminating the Master’s Degree exemption (H-1B cap for 20,000 is reserved for beneficiaries who have obtained a US master’s degree or higher, also known as the “advanced degree exemption”) and including provisions for inflation adjustments. The move is said to evaluate and assess organizations that have been using cheap labor at the expense of the American workers and in the process curb the visa misuse.

The Protect and Grow American Jobs Act increases the required salaries that replace American workers from $60,000 to $100,000 per year and eliminates the Master’s Degree exemption

The data reflects that out of the total H1-B visas issued by Washington world-wide, approximately 70% of all H1B visas are issued to Indians. With the $143-billion Indian IT industry procuring about $65 billion of total export revenues from US market alone, the introduced bill can be potentially threatening not only for Indians who work or want to work in the US, but also for the Indian outsourcing firms. With the reintroduction of the bill, the share of India’s biggest IT company Infosys fell 2.50%, followed by TCS and Wipro which went down 2.18% and 2.18%, respectively. The stocks of India’s three major IT companies were the worst hit on the Sensex benchmark that closed at 119.01 points lower at 26,759.23. Tech Mahindra, another technology firm also suffered losses as its shares crashed steeply.

It has been often speculated that there has been a significant lack of STEM skills in the American workforce. According to the analysis of the third annual U.S. News/Raytheon STEM Index (2016), “America continues to have a shortage of STEM workers. There were 30,835 additional STEM graduates and 230,246 additional STEM jobs from 2014-2015.” Moreover, a report by the Bipartisan Policy Center, “Culprit or Scapegoat? Immigration’s Effect on Employment and Wages”, that analyzes the wage and employment outcomes of the foreign and native born populations in America, reveals that “the declining native-born labor force participation is largely due to the various options native-born individuals tend to have at their disposal to pursue non-labor force activities—namely retirement, disability, and school enrollment, rather than any direct competition from immigrants.” Along with this, native-born workers are more inclined towards taking up higher wage paying and high-skill industries. 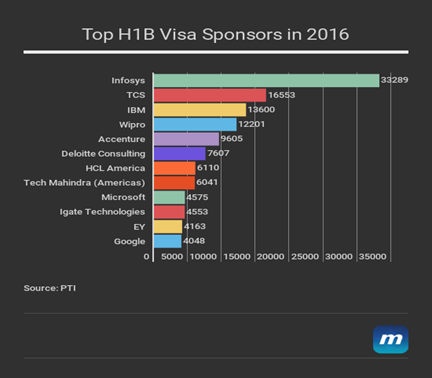 With the stated facts, it is to be seen as to how the changes to the H1B visa program really affect organizations operating in and outside of America.