Article: Meet the startup aiming for the moon and more at TechHR

With “Anticipate” as the theme for the 2018 People Matters TechHR conference, it is but natural that the TechHR conference will take a deep dive into new age technology and trends that will define the future of work in the coming years.

From decoding the impact of emerging technologies such as Artificial Intelligence and Machine Learning, Augmented Reality, Virtual Reality, Blockchain on the future of work to showcasing cutting-edge HRtech startups which will transform the world of people and work, the conference will bring the delegates come face to face with new age technology. Technologies that range from humanoids to those that go beyond the realm of work to the heavens above.

Here’s a sneak peek at the exciting tech stuff lined up at the People Matters TechHR conference.

One of the most unusual speakers in the speaker list of TechHR is the two feet tall, oversized toy look-alike humanoid Manav. The first completely made in India humanoid is built with 21 sensors, two cameras in its eye sockets and two mikes on either side of its head and is also India’s first 3D printed humanoid robot.

Manav's inbuilt processor and pre-programmed sensors allow it to perform tasks such as walking, talking and dancing without the help of a laptop and it can do so just in response to human voice commands. 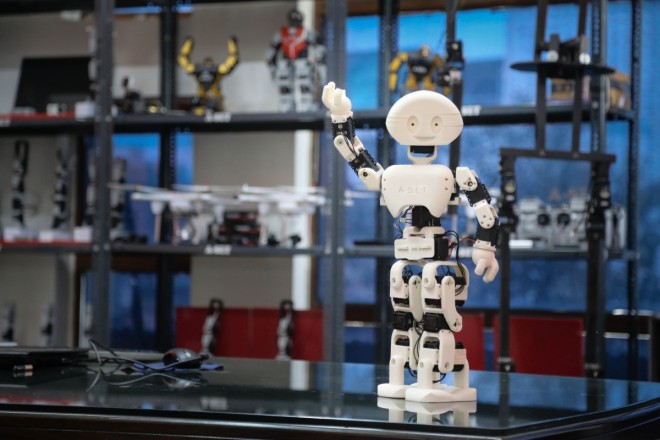 Developed by Professor Diwakar Vaish, founder of A-SET Robotics in 2015, it uses an open-source code so that it can also be taught to learn and respond like a human child. The robot has the capability of Binocular vision processing giving it the ability to perceive depth and perspective and is also equipped with Wi-Fi and Bluetooth connectivity.

Manav is just one of Diwakar’s achievements, who believe that robots have been restricted to playing behind-the-scenes roles in the manufacturing industry.

His endeavor with Manav and interest in robotics stems from his keenness to help bring robots into the limelight and make them a part of everyday life, aiding the physically challenged or assisting humans in daily tasks.

One has to be living under a rock to not know about Bengaluru based aerospace startup TeamIndus’ pursuit of the $20 Mn Google Lunar XPrize, the global competition to get a robotic rover to travel 500 meters on the moon and transmit pictures from there. The team harbors the ambition of being the first private enterprise to soft-land on the moon. So while startups dream of disrupting ecosystems on the earth, TeamIndus is looking as far as the moon!

Even though Google is no longer sponsoring the project as the XPrize Foundation concluded that none of the five remaining teams could meet the deadline, the contest is now operating as a non-cash competition. And TeamIndus looks unfazed in its moonshot.

Led by CEO Rahul Narayan, TeamIndus is the only Indian team in the competition. With the $35 Mn raised by the startup so far from investors like Nandan Nilekani, co-founder Infosys, Rajiv Mody, CMD and CEO of Sasken Communication Technologies, Subrata Mitra and Shekhar Kirani, partners, Accel Partners and Sharad Sharma, co-founder, iSpirit, CEO Rahul Narayan and his team is working towards developing the hardware and launching the mission sometime in 2019.

The spacecraft will hold a rocket engine, 16 thrusters, propellant tanks, and a suite of commercial and experimental payloads. TeamIndus' lander is code-named HHK1, and their rover is called ECA, an abbreviation for Ek Choti si Asha (A Small Hope). Whether the 600-kg-plus spacecraft and 60-kg lander-rover are able to fulfill the team's hope to lands on the moon or not, the rover sure is coming to the TechHR conference!

Meet these and many more such startups at TechHR 2018. Click here to register.

Shweta is working as an Editor with People Matters. You can reach out to her at shweta.modgil@gopeoplematters.com
NEXT STORY: How to minimize organizational risk with resume screening

Leader, are you listening?

Digital Nomads- boon or a bane for organizations?

Samsung R&D to hire over 1,000 engineers from IITs & BITs