Article: What leaders need to know about AI

Organizations today are focused on identifying avenues to introduce AI into daily tasks and deliverables. While the common perception is that it creates a sense of insecurity among employees, contrary to this belief, employees are in fact more receptive and ready to deploy AI into their work, a study by Dale Carnegie reveals.

During a roundtable discussion on “Preparing people for the Human Machine Partnerships of the future,” conducted by Dale Carnegie in New Delhi, experts explored ways in which industry leaders can incorporate AI technology into their HR Tech, performance feedback systems, upskilling initiatives, etc.

The survey that saw participation from 3,846 respondents across 13 countries, aimed to assess the readiness of the global workforce to accept AI in their work, feedback systems, skilling needs, etc.,  highlighted that 42 percent of the organizations globally are already using AI in one form or the other.

War of skills: Human vs. AI

AI can take over data processing and predictive analytics at workplaces but where it still lacks is in developing the ability to manage and develop people, build communities, and interface with stakeholders. The chances of AI being able to recreate the human experience in interpersonal interactions are bleak. Although, while AI becoming a people manager seems unlikely, it has established its worth as an employee, rather a virtual employee. Two such virtual employees are Amber (at Evalueserve) and Andrew (at GlobalLogic), among other AI-based employees.

AI might be able to make its way through automation, however, humans aren't far away in stepping up to do what AI cannot. 73 percent of respondents indicated an inclination towards acquiring soft skills with the focus largely on communication skills (69 percent), creativity (64 percent), critical thinking (56 percent), leadership (54 percent), teamwork (50 percent), emotional intelligence (44 percent) and empathy (28 percent). Given AI currently lacks creativity and social intelligence, training employees on these skills could give organizations an edge by creating a power workforce with AI and employees working together as a team rather than as competitors trying to replace each other.

Application of AI across functions

He further added that there has been a significant shift in upskilling and upgrading the capability of the L&D function and the nature of services being provided by them.

“The agility of the learning function has enhanced significantly,” he said.

Given below are some of the applications of AI across functions as shared by Mark Marone, Director - Research & Thought Leadership, Dale Carnegie and Associates: 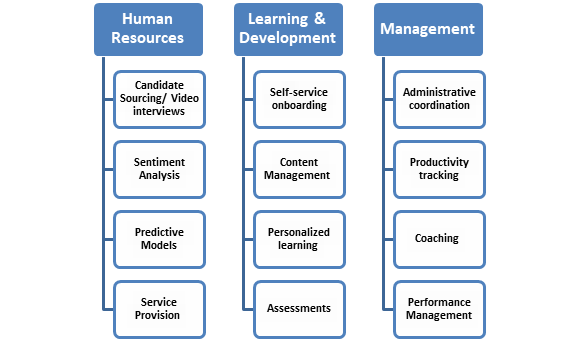 AI comes with its own set of challenges. It might facilitate quicker data processing and prediction, but the technology has a lack of clarity in HR applications with respect to the following:

“There is a tension between predictive power and appropriateness. While data generated using AI may have good predictive powers, it may not always be appropriate, so HR leaders need to think about how to balance the trade-off between what’s efficient and what’s appropriate,” said Marone.

There is a need to bridge the existing knowledge gap on the intent of using AI and its capabilities. It's time to change the mindset from competitors to a power combo of humans and AI!

Bhavna Sarin works as Content Manager and Lead - D&I at People Matters. You can reach out to her at bhavna.sarin@gopeoplematters.com
NEXT STORY: Designing a Rewards Platform using HR technology
Also Read: Kellogg on building capabilities with their Masterstroke journey
Also Read: Union Budget 2023: What do we need to “Make AI in India” and "Make AI Work for India”?

Kellogg on building capabilities with their Masterstroke journey

Onboarding high-impact freshers with the right opportunities at Tiger Analytics