If you have seen the movie Troy I would like to take you to that one scene in the movie where Brad Pitt is leading the boat on attack on Troy and there is one soldier who asks him, what do you see ahead?. He says, immortality.

The problem with certain well-funded startups is that they end up exhausting their monetary resources rapidly; mostly in efforts to provide high levels of compensation in competition for labor. For example many of the delivery based start-ups that have recently shut down had initially been offered significantly higher compensations for their delivery boys; sometimes as much as 2.5 times of the market value. When you do this, you run a risk of burning out too soon. When startups get funded, it’s important to not depend on money to solve all problems. We tried doing something similar in the beginning. Since we started with a decent amount of capital, we decided to hire employees at salary rates which were significantly higher than the market value. But we realized quickly that this not a sustainable way of creating a team. Entrepreneurs need to build teams that are rooted in the company’s way of doing things.

To give you an example, one of our employees was in an urgent need of money due to certain problems at home. Looking at the depth of the situation we decided to help him out by giving him that sum of money. We wanted to show our employees that we actually care about them. And it did pay off. Blue collared workers are the most poachable staff and often jump ship for even marginal salary hikes. However, in spite of getting multiple offers at higher salaries, that employee didn’t leave us because he values our environment. You have to show your employees that you care about them and stand by them in times of need. Balancing the economic and the emotional aspects is a must. Only then can you actually build a good culture within your company. 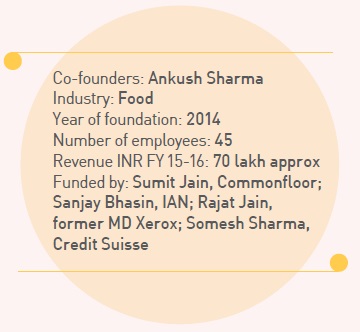 When we were forced to downsize, it created a negative sentiment in the company in which our existing employees were starting to look for other jobs because they thought we were going to close shop soon. I found out from somebody that one of our kitchen heads was searching for a new job. I called him and showed him a presentation which had some big numbers on it, some big growth salaries — one which I ordinarily would have reserved for my investors or my more educated teammates. He didn’t understand everything but he understood that this guy is trying to do something and it is not that the company is shutting down. In tough times, you have to convince employees that the company is still thinking ahead and that downsizing is just a part of that strategy. If you have seen the movie Troy – I would like to take you to that one scene in the movie where Brad Pitt is leading the boat on attack on Troy and there is one soldier who asks him, “what do you see ahead?”. He says, “immortality”.

If you have the vision for growth and you keeping telling that story to them again and again, they will stay with you because you are a good person. The numbers that we show to investors are also comprehensible to our employees. It is not like one of my lower level cooks wouldn’t know how much 1 crore is. If I go and tell them the same story that I tell my investors, then it is not like they will not understand it. If I explain correctly, then even they would get it that what I am saying must be true at some level. You have to sell your growth story, not just to your investors but to your employees as well, time and again. There is a different between practice and theory — In practice, what you achieve in terms of growth is not in you hand. The possibility is, but the final result is not. If your employees know that in spite of adversity, you have paid them their salaries and provided them what they needed, then they will also understand that it is a difficult phase that the company will come out of and they just have to hold tight.

The editorial team at People Matters has features writers, researchers and content experts with rich domain knowledge. We endeavour to create an impact on the HR community through thought-provoking and futuristic content.
NEXT STORY: HR leader at OYO Rooms is expected to play a business role

What should a Preamble for Talent Leaders look like?

Bluestone Founder-CEO on the importance of setting clear goals