Blog: I need leadership help & I intend to get it: Uber CEO

Already battling with criticisms over allegations of sexism that exist in their workplace, Uber CEO Travis Kalanick came under another setback when a dashcam video of him arguing with his own Uber driver surfaced on the internet on Tuesday night.

While a decent argument could have still been justified, but Kalanick got personal with the driver, Fawzi Kamel over Uber’s high-end service and dropping prices. “Some people don’t like to take responsibility for their own shit,” he said. “They blame everything in their life on somebody else. Good luck!” Then he slammed the door.

According to Bloomberg News, Kamel took the opportunity to rate his rider with just a single star.

Kalanick has apologized for his behavior in the video in an email to Uber staff, which the company also published on its blog. 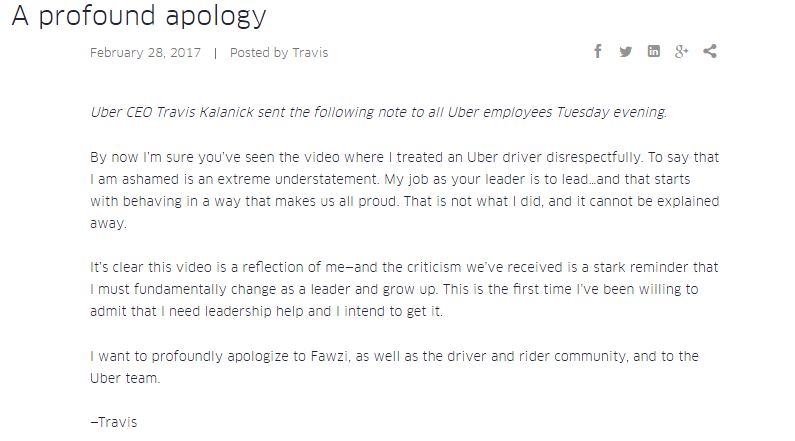 Kalanick has intended to seek help when most leaders even fail to acknowledge they need help in distress. It’s difficult to find a reason for this. More often than not, we expect our leaders to be flawless which itself is a big ‘want’. Leaders succumb to the pressure of continuous success and also to be positive all the time. Leaders have very small ambit of operations, personally, as they can't really 'hang out' like their employees do. And they almost do not share their ‘sob’ stories with anyone professionally. But are leaders not humans? He/She has reached the pinnacle of success based on the failures and learning. So why do they pause before seeking help?

Dr Marshall Goldsmith, in a recent interaction with People Matters delved on this exact issue. He said that as leaders or anyone, if you need assistance, it is “okay to ask for help.” He says, “In life, one of our major challenges is the challenge of comfort — when things are going well and we become comfortable, it is hard to challenge ourselves. But we should continually ask ourselves the questions : Am I being the leader I could be?”

Dr Goldsmith also shared that Leadership development is a lifetime process. For all the leaders he has coached over the years, most of them are already successful leaders, yet they are still trying to get better.