If we live in India, we live in an ageist society. After 60, according to many, or most, people are labelled as senior citizens who become slow, are not digitally savvy. Some believe that when you double click on what they want to say, there is some buffering in getting their point of view across.

While some literature exists on the silvering workforce, in most contexts it is seen as a demographic drag. In Europe and Japan buses are stopping a little longer for that retractable step to take in wheelchairs. But in India there is no time for that. After all they are a drag on the dependency ratio. This ratio is a measure of the number of dependents aged zero to 14 and over the age of 65, compared with the total population aged 15 to 64. This indicator is supposed to indicate the number of people of non-working age, compared with the number of those of working age.

Unlike our obsession in India about retirement ages, in many parts of the West, mentioning a retirement age in the appointment contract, is not customary. In fact, a reference to age is not only socially awkward but can also trigger litigious rebellion

India will soon lose its demographic dividend. The dividend cannot last forever. Though our spend on healthcare as a nation is pathetically low as compared to the more advanced nations, people are living longer due to modern medicine. This is notwithstanding the recent trend of seeing alarmingly high levels of pollution in several cities. The technological advancements in medicine, emphasis on clean surroundings and personal fitness has led to longer lifespans.

Organizations that believe in a Diversity & Inclusion (D&I) agenda must also consider the 5th Generation. The Yoldees (older people with youthful hobbies and minds) can be as alert and as productive as their younger counterparts. Unlike our obsession in India about retirement ages, in many parts of the West, mentioning a retirement age in the appointment contract, is not customary. In fact, a reference to age is not only socially awkward but can also trigger litigious rebellion.

Looking at somewhat dated census data of India from 1991 to 2011 (The next Census is due in 2020-21), we find this observation is validated and a large number are getting added to the silvering workforce.

Charts 1 & 2 shows how people in the age group 60-69 years are increasing as a percentage of Total Population. This holds for the Literate Population also.1 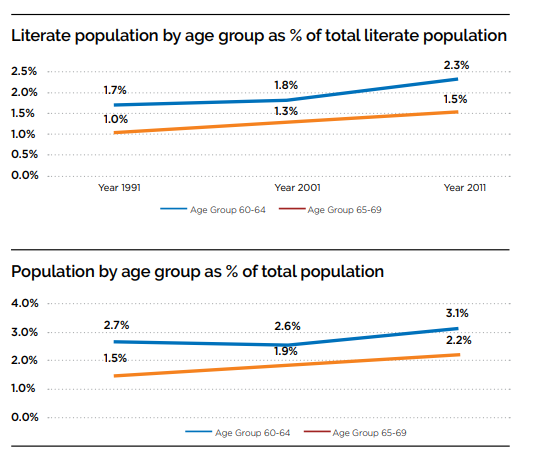 Kingsley Davis led and conducted major studies of societies in Europe, South America, Africa and Asia, coined the term "population explosion", and played a major role in the naming and development of the demographic transition mode. There was a big concern about this phenomenon in India, in the 1960s, 70s & 80s which turned out to be a boon later as we advanced into the late 80s. India luckily did not have to face the Malthusian catastrophe. Instead, India has become the toast of nations that have a young and productive population. Food supply and famine are still matters of concern but within control.

Many at 60 and above have skills that they are leveraging. They are advising, coaching and mentoring others. A lifetime of accumulating domain knowledge patiently cannot vanish only because a person has crossed 60

As India moves closer to becoming the most populous country in the next 7 years, the country is facing an ageing population. According to some studies, India is ageing much faster than previously thought and may have nearly 20 per cent population of 60 years and above by 2050. The government has stated that India will have 34 crore people above 60 years of age by 2050, more than the total population of the US.2

The celebration of a youthful population does not mean that we treat those who are aging as people who are in their sunset years only marking time in God’s waiting lounge for the inevitable to happen.

Many at 60 and above have skills that they are leveraging. They are advising, coaching and mentoring others. A lifetime of accumulating domain knowledge patiently cannot vanish only because a person has crossed 60. Many are open to reverse mentoring through which there is give and take of knowledge and skills. 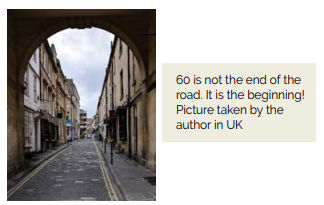 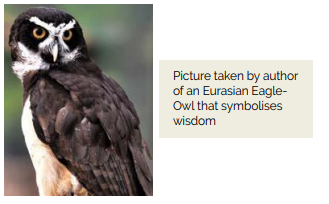 With the turn of this decade, I predict that the single most important competence leaders will have to develop in an increasingly unpredictable world, is the art and science of making a good Judgement. There are several elements to making a good judgement call. In a recent article in Harvard Business Review, the author Sir Andrew Likierman mentions six basic components of a good judgement -

These elements get honed and will mature with age. AI and machine learning can mislead us to take decisions which are wrong because of the tendency of biases to be baked in. And this is where Judgement can be a useful overlay for insulating managers and leaders from using only crunched data (one extreme) or gut (the other extreme).

Humans build algorithms. Machine algorithms are being used in almost all walks of life. Algorithms feed recommendatory platforms. They make recommendations about music we should hear, what movie we should see, about what we should be learning next, suggest which products to buy or not to buy, and are increasingly used in decisions where the stakes are high. However, just like people, algorithms are vulnerable to biases that can make decisions “unfair”. In the context of decision-making, fairness is the absence of any prejudice or favoritism toward an individual or a group based on their inherent or acquired characteristics. Thus, an unfair algorithm is one whose decisions are skewed toward a group of people.

Ninareh Mehrabi, from the USC Information Sciences Institute, California, and her colleagues, Fred Morstatter, Nripsuta Saxena, Kristina Lerman, and Aram Galstyan, mention 23 types of biases in their paper4 “A Survey on Bias and Fairness in Machine Learning”, that can skew a decision made using AI and/or ML. And just to mention again, the algorithm is written by a human. Next, consider Social Bias. Social bias happens when other people’s actions or content coming from them affect our judgment. An example of this type of bias can be a case where we want to rate or review an item with a low score, but when influenced by other high ratings, we change our scoring thinking that perhaps we are being too harsh. We may make a wrong recruitment choice by being carried away by such a bias. With age and experience, the capability to reflect on one’s own biases may be better since this is related to self-realization. Consequently, the capability of factoring these biases in a decision or an algorithm are also likely to be better with experience and self-awareness. To simply write off senior members of the workforce could, therefore, be perilous to any organization.

There have been a few good examples of professionals from the ‘silvering workforce’ who have continued to contribute professionally with exemplary work in their domain after crossing the age barrier and benefited organizations with their vast experience and knowledge.

Here are some examples of leaders who are contributing to the corporate world and have been able to prove that age is only a number. Mentioned below are the cases of a few of the people known to me as leaders who have achieved eminence and excellence. They are above 60 and living an energetic life, and continue to add value to their professional arenas.

Rajeev Dubey is the Group President (HR & Corporate Services) & CEO (After Market Sector), Member of the Group Executive Board, Mahindra & Mahindra Ltd. He is the Chairman of Mahindra First Choice Services and serves on the Boards of three other Group companies.

Rajeev joined Mahindra in 2004 after spending 29 years with the Tata Group, of which 7 years were as MD & CEO first of Tata Metaliks and then of Rallis India.

Rajeev is a renowned name in the field of developing the best in human capital of an organization. Rajeev joined the TAS in 1975 and has a MBA from the Yale School of Management. His wisdom and compassion have been the bedrock for various Human Resources and Industrial Relations initiatives at the prestigious Mahindra and Mahindra group. Rajeev is also a Member of the Governing Body of the ILO.

Anil Sardana is the MD & CEO of Adani Transmission Limited since May 2018. Anil has more than 39 years of experience in the infrastructure space, particularly in the Energy and Telecom sector and has led complex transitions, developments & operations as well as Engineering, Procurement and Construction assignments. Prior to joining Adani group, Anil was leading Tata Power as MD & CEO and had other successful stints at Tata Teleservices, NTPC and BSES (now Reliance Infra).

Anil is credited with having spearheaded the dramatic turnaround of Tata Power Delhi Distribution which achieved remarkable reduction in Aggregate Technical and Commercials Losses during his tenure. Anil spearheaded two major M&As namely with NTT DOCOMO of Japan and a reverse equity swap & merger to create most valuable Infrastructure company.

Anil has been appointed by the Adani’s to take the group’s transmission business to new heights. His energy levels are well known and he continues to electrify the corporate world with his achievements.

Manoj Kohli is the newly appointed SoftBank India Head after a nearly five-year stint as the Chairman of the Japanese telecom and investment giant’s renewable energy business SB Energy since 2015.

Manoj has experience of over 40 years, was the MD of Bharti Enterprises Limited besides working at companies like DCM Shriram and Escotel before joining SoftBank.

Manoj’s key contribution has been building Airtel as the No. 3 telco in the world with over 360 Mn customers. He led Bharti Airtel’s India operations during which the customer base grew from 2 million to 150 million before moving to International responsibility in 2010.

Manoj is on the Board of National Human Resource Development Network (NHRDN) and continues to work with youthful enthusiasm and a boyish grin.

Let us draw inspiration from these gentlemen and many others who are above 60 and are still contributing. Let us celebrate the 5th generation.

With age and experience, the capability to reflect on one's own biases may be better since this is related to self-realization. Consequently, the capability of factoring these biases in a decision or an algorithm are also likely to be better with experience and self-awareness

It is also important that professionals think about a second career when they enter their 50s. These days, the word “purpose” is associated with millennials. But it is equally applicable to those entering the 50s and even more applicable for those in their 60s. Some say their purpose is to leave behind a legacy. Making a mark. Their contribution can be written in indelible ink. Purpose can be much more meaningful and deeper if it is seen as something that is worth living for and is the fire within us which keeps us going. And we are the keepers of the flame.

Future of work and digitization at the workplace

What if your manager changes just before promotion?

Planning for the new work-from-anywhere landscape