Blog: The unforgettable Johari Window: The miracle of 1950s

I recall, I read about Johari Window for the first time in 1980 in the book entitled, Personnel Management by Edwin Flippo when I was pursuing my management education from XISS Ranchi. Somehow I could not dwell into Johari Window beyond what I understood in the classroom. I did try to find out the application of this model in some up-coming industries closer to Ranchi. In this connection, I was keen to contact Maruti Suzuki India which rolled out its first affordable car in India, Maruti 800 in 1983. Later, I came to know that the commercial production had not yet started at their plant at Gurgaon, They were in the process of getting ready for it.

The next move was to explore somewhere else. We all know that the beginning of the 1980s saw widespread gloom in India's macroeconomic performance after the emergency was officially declared over in 1977.  However, during the period from 1980-90, the economy began to pick up and the rate of growth increased to 5.8 percent and was exceeded by only eight out of 113 countries. Only after the growth accelerated in the 1980s, was there a significant downward trend in poverty. A point to note here, however, was that although GDP growth did pick up by almost 6 percent in the 1980s, it was driven mainly by a massive expansion in the country's fiscal deficit.

In light of the above scenario, I tried to explore business turnaround story (terminology like business transformation was not so much in use …but now we are quite familiar with this) in Bihar (Jharkhand was part of Bihar state in the 1980s) and Delhi region (now NCR) to check application of Johari Window, but again I could not lay my hands on any such story. Perhaps, being a student, my reach was also limited. So I left my exploratory journey of Johari Window unfinished in 1982 when I passed out from XISS. But I did not abandon my thought of re-starting the journey.

Johari Window (Diagram 1 & 2 shown below) is a simple and yet a very useful and proven tool for understanding self-awareness, improving communications, interpersonal relationships, intergroup relationships, group dynamics, personal development, and team development. This Model depicts communication windows through which feedback is given and received. Through feedback and disclosure, one can reveal more about self to others and learn more about self from others. 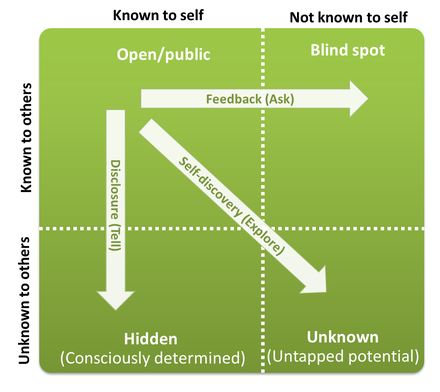 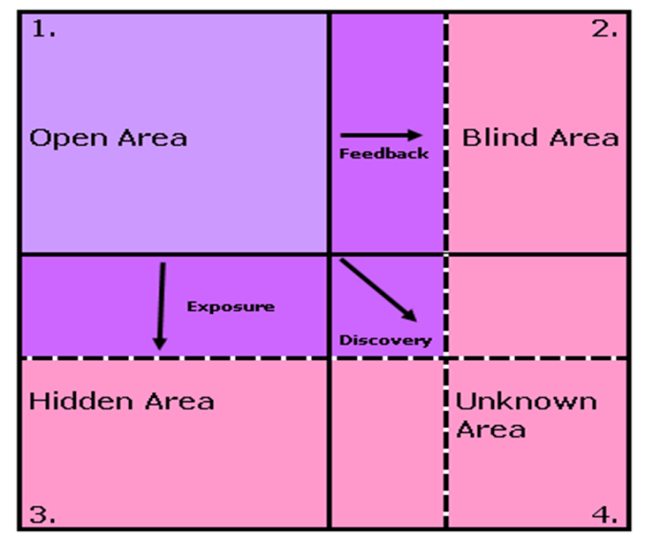 The organizations which are getting into business transformation, building performance-driven culture and working on the ambitious agenda of enhancing employee engagement score, may look at Johari window model to build transparency, employee involvement, and conversation around change.

The successful organizational change requires consistent and transparent communication to employees across the organization about the intended change, alignment to organizational goals and expected change in employees’ behavior and it would necessitate a change in the size of the WINDOWS.

Let me share a case (name of the company changed to SYS Company):

For business transformation, firstly, the timeline was decided (2017-2022) and secondly, the stakeholders (who should be aligned with the change - as they would be impacted by change) and they are Employees, Customers, Channel partners and Vendors & Suppliers. In stage three, 4 scenarios were created in case of each stakeholder.

2. Known to Employees
Not known to SYS Company

Quadrant-1 strengthened the on-going relationships and engagement with the stakeholders. The pain areas which were not attended in the past came up for discussions and solutions were worked out jointly by SYS Company and the concerned stakeholders. Since there was involvement of stakeholders at every stage of discussion and finalization, the solutions and the change agenda were implemented successfully.

2. Known to Customers
Not known to SYS Company

2.Known to Vendors & Suppliers
Not known to SYS Company

Quadrant-3, this quadrant really helped the stakeholders, as mentioned above, to understand from the leadership team about the long-term thinking of the company in terms of business growth, possible challenges in gaining/losing market share, and expectations from stakeholders in participating in company’s growth agenda, product innovation (based on outside-in approach). Undoubtedly, the conversation in this quadrant helped in enhancing mutual trust.

2. Known to Channel partners
Not known to SYS Company

Quadrant-4, the journey in this territory along with the stakeholders was amazing for SYS Company…it was a great exploration unearth new opportunities of high growth areas (including, areas for reducing costs & wastages, new markets, new products, possible impediments in accelerating sales & revenue, impact of shrinking the organization to grow…and many more) to bring about an unprecedented improvement in the bottom line of the Company.

Further, this journey helped SYS Company to come out of ‘Forcast’ syndrome, which was practiced for ages, and try out ‘Scenario planning’ as a tool to create plausible/alternative futures which may unfold with time (5-10 years).

It was observed with great surprise that the potential areas of growth which emerged through this exercise were neither explored by SYS Company nor by any of the stakeholders in the past…Johari Window worked well.

To conclude, application and usage of Johari Window is wide and quite expandable. It helped SYS Company to move ahead successfully and create a compelling story of corporate transformation in collaboration with the stakeholders and create new wins…quick wins in the market place.

Digital Transformation v/s Digital Disruption: What does the future of HR look like?

It's all about 'superskilling' as we go deeper into the digital-first world: Cisco’s Sirisha Palepu

Getting through the 'Monday Blues'

Have you equipped yourself to survive if you are lost in a jungle?

How HRs can get inspiration from RJs in the virtual workplace?

Navigating the hybrid working paradox: Why, What and How