Blog: A Human-Robot interaction researcher on what it means to be a robot!

Recently I came across the TED talk by Human-Computer Interaction (HCI) and Human-Robot Interaction (HRI) researcher, Leila Takayama on what’s it like to be a robot. As businesses move forward to employ more and more robots, it is interesting to understand how humans interact with robots.

Leila very candidly talks about her first interaction with a robot in 2008 when she bumped into one at Willow Garage and it just stared blankly past her, rapidly spun its head 180 degrees and ran away. Well, robots play a plan (read “the software code”) and are just like any other machine. Take, for example, the dishwasher, vacuum cleaner, lawn mower or even a car, basically, any machine that makes our job easy or serves a purpose in our lives is a robot. And that makes us all robot operators; masters at adjusting ourselves to operate these machines (read “robot body”). 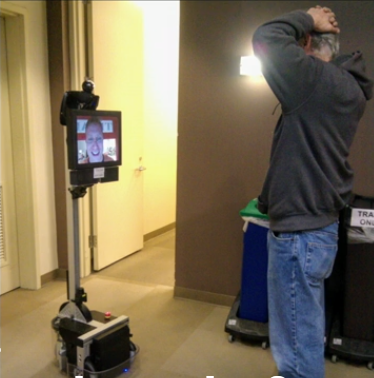 At Willow Garage, Leila shares about how they are enhancing collaboration with virtual workforce using robots. When a colleague works from home, it is easy to ignore emails and avoid conversations. But what do you do if the virtual colleague gets an ability to knock on your shoulder and ask you the question face-to-face, while still working from home? The image on the right shows a robot that Leila’s colleagues created and this is just “Skype on a stick on wheels!” Over months and years, these machines have found a place in the office as fellow colleagues – be it a part of meetings, team outings or parties. And it is these experiences that bring forth interesting truths about how humans and robots interact. Here are a few things that Leila learned from these interactions:

Today, we are designing a world where humans and robots coexist and collaborate and that requires perspectives from every direction, be it artists, designers, policy-makers, legal scholars, psychologists, sociologists or anthropologists. And Leila beautifully concludes reiterating that as we continue to experiment with these robotic futures together, we will continue to learn a lot more about ourselves.

If you have interacted with a robot yourself, leave a comment to share how the experience was and what did you learn from that human-robot interaction!

You can view the entire TED Talk here:

Megha Agarwal is the Senior Manager - Research at People Matters. Reach her at megha.agarwal@peoplematters.in
NEXT STORY: 5 future-ready recruiting skills you need to know

Workplace Trends to watch out for in 2022

How to attract and engage Gen Z employees in 2022

Expanding on your talent pools: Build better onboarding and training experiences for your new hire

2021: The year of reinvention in technology

You are loving WFH, so are hackers