The other weekend, I finally succumbed to my eight year old’s persistent pleading that I help him solve a Rubik’s cube.

It was a few years after the cube was first released in late 1977 (invented by Ernő Rubik of Hungary, and initially released as the Magic Cube FYI), that the cube came into its own, and that’s the time that I recall, when children everywhere were hunched over the colourful toy, twisting and turning, some with great glee and accomplishment, and others with frustration and bewilderment. Without a doubt, I fell into the bewildered category, picking up a cube and having no idea how on earth one small coloured face could be forced into a specific place, let alone making all the other pieces line up and behave themselves too.

There are many things in life that I consider myself perfectly capable of doing in a ‘good enough’ fashion, but the Rubik’s cube went directly into the ‘too difficult box’ and never did I apply myself to it in any tiny way.

Fast forward 40+ years, and my love for my young, determined, earnest, persistent boy-child propelled me over the abyss, and the conviction that even I, someone so spatially inhibited as myself, might be able to solve the Rubik’s cube.

It was not only my love of child #2 that made me tackle the problem. My decision is more largely indicative of a period of learning and growth that I have consciously set out upon.

Having left my comfort zone 3 years ago, in my professional life,I have pushed myself to do things that are not necessarily the ‘easy’ or the ‘assured’ way of making a living, the most notable being directing up! advisory, my boutique HR consultancy, still a little chick in its fledgling stage, and requiring great adaptability, growth mindset and resilience.

But, back to the cube.

So, how on earth do you start solving a Rubik’s cube? Recognizing my own limitations, I had hardly picked the thing up before I typed ‘how to solve a Rubik’s cube’ into google. And hello Robbie Gonzalez and his wonderful video.

There is so much that I liked about Robbie and his approach, but the first thing I must take umbrage with him on, is his estimation of my learning abilities. “Set aside an hour or an hour and a quarter for the first time you try to solve the cube...”. Ummmm, make that seven and a half hours and four pages of hand-written notes. I told you, I am not a natural! I started doing it with my son, but when his bed time had come and gone, and we were still holding a jumbled cube of colours, I sent him to bed and ploughed on solo, jotting down notes that made sense to me, in a desperate attempt to pin down this magical manoeuvring in a way that I could teach and replicate.

I also went to bed that night without having solved the damn thing.

Honestly, I did have a small melt down, threw the cube across the room and watched Silent Witness instead. At that time solving a murder with forensic science seemed a lot easier.

The next day I couldn’t wait to get my hands back on it, and achieve the glorious moment of actually solving it…!

So, a few hours later, I had finally got it. The joyous moment of six matching shiny faces of glorious achievement! The photo I share is actually the first time I finished it, and I gave it to my son to do the final twist. 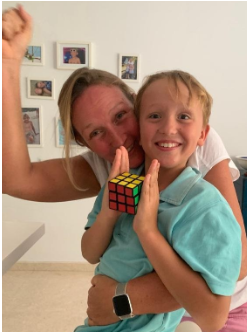 What a moment of supreme generosity and maternal love that was! All my hours of fidgeting and fiddling with the cube, but the point is, that I knew I had done it, and I knew I could do it again! What a glory! The fact that millions of people around the world can complete a Rubik’s cube is absolutely irrelevant to me. The fact that I could manage it eventually, and that I could show my son how to do I - true achievement!

I am now revelling vicariously in the fact that both my kids no longer need the handwritten formulae to complete the cube, and are every day bringing their time down, currently 1.5 minutes for my son. Again, the fact that the world record is 4.22 seconds, is not only ludicrously unbelievable, but is entirely irrelevant.

This entire process was thought provoking in so many ways. Here are some key takeaways from this entire problem-solving journey:

The democratization of information and knowledge

That some kind chap was good enough to record and post a 24 minute video, explaining in explicit detail, how to solve the problem, free of charge, accessible in 2 clicks, well, that is pretty amazing isn’t it? That certainly was not an option in the ‘80s. And this is representative of all the information out there, smart and kind people all over the world are sharing their special skills and knowledge, and we can all access and learn from them (I’m very deliberately not talking about all the other viral stuff being shared, this is not about that stuff)

What prompts us as individuals to move something from the “too difficult” to the “My God! I can do this” box? The motivation to give something a go, and the limitations we impose on ourselves when we put things in the “too difficult” box. What have you put in that box? Do you think that you can challenge yourself to take it out?!

Some people learn really fast. And what they “get” might not be the same as what I “get”. The Rubik’s cube feels like it is specifically designed to outfox me. Personally, ME! But applying myself, taking a break, resting, starting again, I did it. I’ve mentioned the enormous sense of achievement I felt when I saw it all come together in the final twists. Achieving things that are harder and require us to be resilient pays dividends in the self actualized reward we experience.

My kids just couldn’t be prouder that they know how to solve a Rubiks’ cube. They take the cube with them when we go out, they solve it on the bus, they show it to waiters and friends. And my heart fills with pride too. It’s not like they designed the thing, but they worked hard to learn and memorise the moves. Now they are seeing other ways of completing it. They are tricking people by doing just a few twists that messes it up but is actually very easy to complete. They are PLAYING. And it’s not technology! Hallelujah! They are playing like kids played when I was a kid!

Can I leave you with a suggestion? If you are homeschooling your kids right now, fighting them off technology (or tying them up in the spare room while you try and take work calls), why not set off on this journey together? Solve the cube. We can call it corona-cubing if that makes it trendy.

If you don’t have kids, do it anyway. Be the weird middle aged adult puzzling over the damn thing.

Let’s fill ourselves with the wonder of achieving something we thought impossible!

Marieke van Raaij is a Director at up! advisory, a boutique consultancy firm focused at improving employee experience.
NEXT STORY: Here’s how employers can support working parents in times of COVID-19
Also Read: Holiday office party canceled? Try these 8 social distancing alternatives
Also Read: My son’s day-out – I am failing!

The return-to-work pushback: What it means for the future of work

The new definition of organizational success