Former Facebook India managing director Kirthiga Reddy has joined SoftBank Investment Advisers, which manages the SoftBank-led $100 Bn Vision Fund as its first venture partner. She will be based out of SoftBank's Silicon Valley office.

In a Facebook post, Kirthiga stated, “I look forward to bringing my technical and business expertise – from both enterprise and consumer technology, in developed and emerging markets – to the Vision Fund team. Like in other investment firms, the Venture Partner role enables quick integration of new talent from non-investing backgrounds, which is a perfect fit for me.” 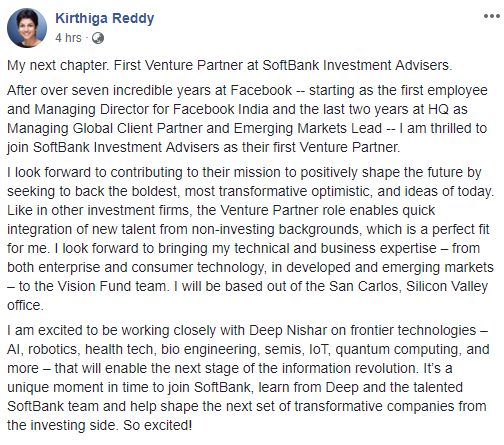 Kirthiga will work closely with senior managing partner Deep Nishar focusing on frontier technologies that will enable the "next stage of the information revolution" like Artificial Intelligence, robotics, health tech, bioengineering, semis, IoT and quantum computing among others.

Reddy was Facebook's first employee in India and had served as the MD for India and South Asia market until 2016. Post that she relocated to the company’s US headquarters in the role of Managing Global Client Partner and Emerging Markets Lead.

Kirthiga’s appointment comes closely on the heels of SoftBank announcing plans to open an India office in Mumbai last month as it looks to fortify its place in the country's technology ecosystem. The Japanese fund also appointed Sumer Juneja as the next India Head last month.