As per media reports, Arunabh Kumar has quit as the CEO of the TVF (The Viral Fever) on account of alleged sexual harassment charges against him. In his Twitter account , he says that the last few months were very challenging for him – that has mentally and emotionally drained him. He talks about his entrepreneurial journey and passion. Also, shares his dream to make an Indian content company match the standard of Disney & HBO.  He also discusses TVF culture. He says the core of TVF is culture rooted in democratic and equal opportunities for everyone irrespective of gender, caste and background. 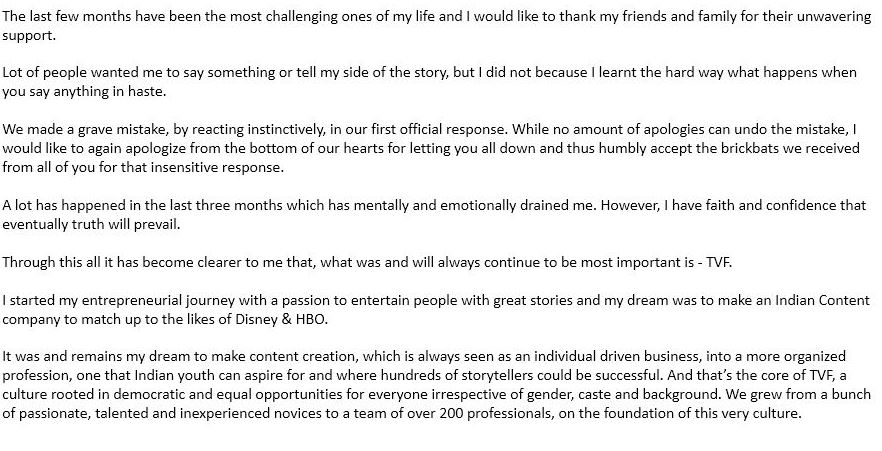 He also adds that he will be available as the mentor for the content team as he hands over the reins to Dhawal Gusain who has sharp business acumen and will work tirelessly to scale TVF to greater heights.

Dhawal Gusain has taken up as the new CEO of the company. He has been with the company since 2015 and was working as Chief Operating Officer of the firm. He has taken up various leadership and management roles across sectors and in all has over a decade of experience.

Previously, People Matters had done a story, where the manner in which TVF handled the allegations was discussed. A lot has been said and made out of the entire saga revolving around the spate of allegations on Arunabh Kumar (Founder and CEO, The Viral Fever). One of the critical takeaways for small, growing organizations from this episode was the need to take the possibility of sexual harassment at their workplaces, seriously. As startups commence their operations grow, they get so immersed with the goals of expansion that they neglect upholding of the fundamentals of the organization.

As per the Sexual Harassment Act of 2013, for any office or branch with 10 or more employees, the employer is legally bound to constitute an Internal Complaints Committee and strictly adhere to all the tenets of the Act. There should be clarity on the rights of the employees, and on the definition of workplace sexual harassment.