Twitter CEO and Square founder Jack Dorsey has pledged $1 billion of his stake in Square Inc, the payments processor that he co-founded and heads, to help fund relief efforts related to the coronavirus pandemic. 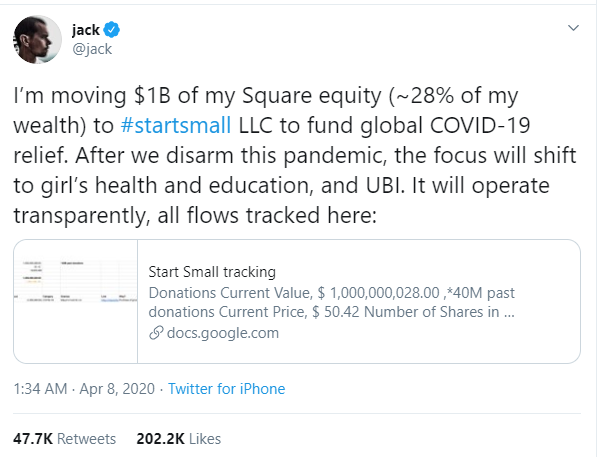 The amount which constitutes his 28% of his wealth, will be donated to his charity fund, Start Small LLC, which would later focus its attention to universal basic income and girls’ health and education, mentioned Dorsey.

All donations to and from the fund would now be visible to the public at all times through a public document, added Dorsey.

Dorsey, whose net worth is estimated at $3.3 billion by Forbes, also said that he was pledging his stake in Square instead of Twitter because he owns a bigger portion of the payments processor.

Neelanjana works with the Editorial Team of People Matters as Assistant Manager - Content Projects & APAC Community Lead. She is responsible for managing content for India, SEA & ANZ website. She leads and manages end-to-end processing of guest articles from Senior HR and Business leaders. She also takes care of the community engagement for various branded projects for the company. With ace networking skills and eye for details, she thrives to bring fresh and renowned HR and business leaders on board.
NEXT STORY: COVID-19: Treebo Hotels to cut 400 jobs
Also Read: CMS IT Services appoints Sanjeev Singh as CEO and Managing Director
Also Read: Tata Trusts hires Siddharth Sharma as CEO, Aparna Uppaluri as COO