Amazon.com Inc disclosed that the median annual compensation of its employees is $28,446. This is for the first time that the company has made such disclosure. A new requirement that companies disclose the gap between pay for the rank-and-file and the person in the corner office led to this revelation.

The number $28,446 signifies that half of Amazon's workers make more than $28,446, and half make less. Further, this median pay figure is skewed by more than 560,000 Amazon employees who work in its package warehouses, distribution centers, whole foods grocery stores and other departments. Amazon said its median pay figure includes people in more than 50 countries along with the part-time employees.

Amazon’s median pay is less than Facebook’s as its median pay stands at $240,430. Other organizations like Verizon and AMD also have higher median worker compensation as compared to Amazon. 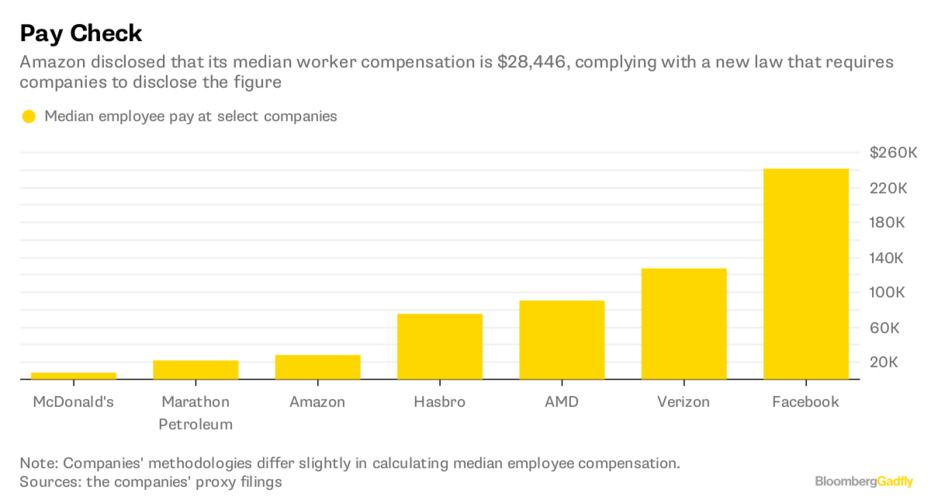 Recently, Amazon laid off sixty employees from their organization as a global restructuring practice but also promised to hire more employees. In spite of the layoffs, Amazon’s workforce in recent years has proliferated making it the second largest private employer in the U.S. Jeff Bezos, Chief Executive Officer, Amazon in his annual letter to the shareholders mentioned Amazon’s investment in infrastructure and highlighted its ability to create jobs both directly and indirectly. The company directly created more than 130,000 jobs in 2017, and this does not include people the company absorbed from acquired companies such as Whole Foods.

Jeff Bezos himself is known as the world's richest person and has reported total compensation of $1.68 million last year. In prior years, he had collected a salary of $81,840 and had $1.6 million in personal security costs that Amazon covered.