News: Indians spend 7% of their day in office commute: Report

As per the ‘Travel Time Report Q1 2019 vs Q1 2018’ released by office commute platform, MoveInSync Technology Solutions, for six key cities of India namely, Bengaluru, Hyderabad, Chennai, Pune, Mumbai and Delhi-NCR, an average Indian spends 7% of their day in commuting to office averaging less than 3 minutes per kilometre. The report is based on the data collated from the rides on MoveInSync platform. 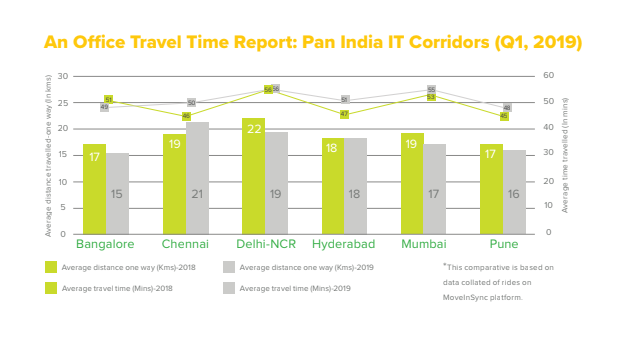 According to the report, the time spent by Indians in daily office commute is among the highest in the world, with more than 2 hours on the road every day, with a workday equating to 50% of the day for the average Indian. In addition, the average travel speed across 6 cities indicates that India’s IT corridor inches at 24.6 km/hr or 2 minutes and 26 seconds to cover a distance of 1km.

The report also outlines the worst and best days as well as time of travel to and from work in the week across the six cities. This was no surprise that Monday was found to be the worst day of the week in all six cities to travel to work with the highest average one-way commute time. Tuesday had the fastest average one-way commute time in Bengaluru, Wednesday in Mumbai and Pune, Thursday in Delhi-NCR and Friday in Chennai and Hyderabad. 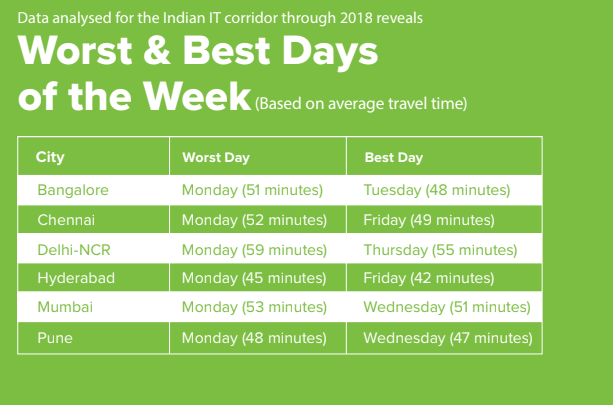 Meanwhile, the worst time of the day to commute to work is 9 am in five cities with 8 am in Delhi-NCR. The worst time to commute back home is 6 pm in Bengaluru, Delhi-NCR, Chennai, and Hyderabad with 7 pm in Mumbai and Pune.

Deepesh Agarwal, Co-Founder & CEO said, “In this report, we see that the average commute time has either increased or remained the same even if there has been a reduction in the average distance traveled to work. This can only be attributed to one thing and that is traffic congestion. A long commute time also hampers the productivity of an employee and as NITI AYOG has stated, the economic loss of congestion for India’s top 4 metros is estimated at $22 Bn annually. The Governments at both the National and State level have taken initiatives to strengthen the urban infrastructure and public transport system to address the twin challenges of pollution and congestion. However, it is also in the interest of each one of us to take initiatives at our level or at an organizations’ level.”

Interestingly, by altering or introducing flexi-work timing, a company’s employee has the potential of reducing the travel time by 20% to 40% or 25 - 50 mins a day. Another reason for companies to support flexi-working policies to ensure a better work-life balance for their employees.

Shweta is working as a Senior Features Writer with People Matters. You can reach out to her at shweta.modgil@peoplematters.in.
NEXT STORY: Indifi appoints ex-Freecharge CEO Sangram Singh as its President