The data supporting the job quantity states that July 2021 saw a major decrease in unemployment rate in India as compared to June 2021, where a difference of 2.22% was observed. However, the report also shares that the number of salaried jobs fell by 3.2 million in the same month.

According to the Centre for Monitoring Indian Economy (CMIE) study, India witnessed an addition of 16 million jobs in July mainly in the agriculture & construction sectors, decreasing the monthly unemployment rate from 9.17% in June 2021 to 6.95% in July 2021.

However, the report also shares that the number of salaried jobs fell by 3.2 million in the same month.

"India saw an addition of a massive 16 million jobs in July 2021. But, all the additional employment provided by India in July was of poor quality. 18.6 million additional people were employed as small traders and daily wage labourers," CMIE's MD and CEO Mahesh Vyas said in his analysis.

Vyas said most of these were engaged in agriculture where 11.2 million additional people were employed. 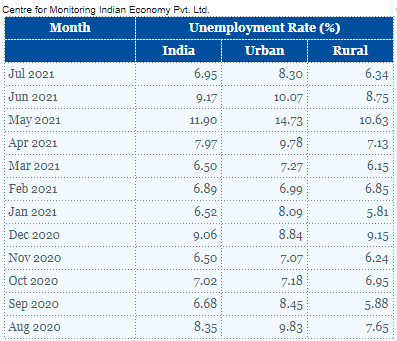 The data supporting the job quantity states that July 2021 saw a major decrease in unemployment rate in India as compared to June 2021, where a difference of 2.22% was observed.

According to Vyas’s analysis, this sharp increase has been possible due to the increase in kharif crop sowing activities in July 2021. He also pointed out that the fluctuation in monsoon pattern is why the sharp increase in employment in agriculture is seen in India.

In July, Vyas said, the construction sector absorbed an additional 5.4 million people, the manufacturing sector shed 0.8 million and the services sector could absorb only an additional half a million, shortfalling the salaried jobs by 3.2 millions.

"Compared to the pre-pandemic times when salaried jobs were of the order of 87 million, the fall is much larger at over 10 million. The several lockdowns since April 2020 and their debilitating effects on the economy have cost the salaried job workers the most," he pointed out.

As salaried jobs are not as elastic as the employment of a daily wage labourer, it is difficult to retrieve a lost salaried job.

These statistics point out a humble observation that though the spurt in July 2021 is good news, moving on, there seems to be a dearth of salaried jobs in every sector of Indian industries. Once the daily wage jobs in the agriculture and construction sectors dry up, the same body of people will try shifting to other other industries, creating a mini-blackhole for employers without any sufficient backing. Also, uUntil investments do not pick up it may be difficult to see most of those 10 million salaried jobs lost since 2019-20 to come back. This could be the biggest hurdle to India's recovery.

Ajinkya Salvi is working as Senior Associate - Content with People Matters. You can reach out to him at ajinkya.salvi@gopeoplematters.com
NEXT STORY: Trentar hires Dhruv Arora as CEO for newly launched Unmanned Aerial Vehicle Division

Redesigning skill programmes is the need of the hour

GlobalLogic employees can choose their own 2022 workplace

Coming to work sick can spark rudeness in colleagues