Centre for Monitoring Indian Economy on Tuesday said 27 million youth in the age group of 20-30 years lost their jobs in April 2020 following a nationwide lockdown to prevent the spread of Covid-19.

According to the CMIE weekly report, the unemployment rate fell from 27.1%to 24% for the week ended May 10 while the labour participation rate rose from 36.2% to 37.6% as the government opens up industries in a staggered manner. Employment rate also rose from 26.4%to 28.6%.

Data from CMIE’s Consumer Pyramids Household Survey shared a disturbing story of young aspiring Indians who have just stepped into the labour markets. Youngsters in the age group 20-24 years accounted for 8.5 per cent of the total employed persons in the country in 2019-20.

But, they accounted for 11 per cent of those who lost jobs. 34.2 million of these young men and women were working in 2019-20. In April 2020 their numbers were down to 20.9 million. Over 13 million youngsters lost their jobs in the lockdown. 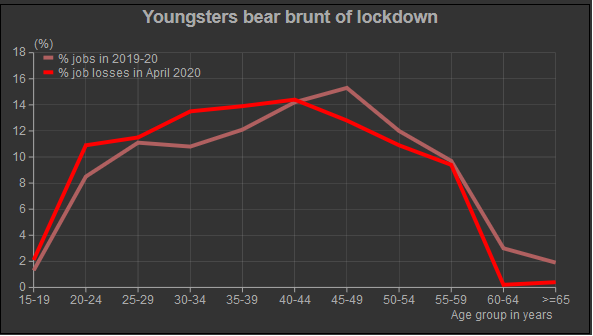 Over 27 million youngsters in their 20s lost their jobs in April. This has serious long-term repercussions. It is during this age that young India builds its career in the hope of a bright future. If the career of this cohort is disrupted or postponed by even a year it will have to compete with the new cohorts joining the labour force after them - arguably, for fewer jobs. Young India will not be able to build the savings it will require later in life.

33 million men and women in their 30s lost jobs in April. 86 per cent of the job losses were among men.

According to Mahesh Vyas, Managing Director, CMIE, “Job losses among the vulnerable are likely to raise the proportion of households in debt. It will also possibly raise debt delinquency. Job losses among the young population would have implications on savings. While households may well conserve cash during these times, the loss of jobs among the young deprives households of the extra cash that is mostly saved for either buying a house or durables or for retirement. This loss of savings will have long term implications.”

Why the metaverse could be ideal for behavioural training