Elon Musk has been making headlines for laying off more than 50 per cent of employees and thousands of contractors. Now the Twitter CEO has fired a member of the company's Android app developer team via a tweet.

This all started when on November 13, Musk tweeted, "Btw, I'd like to apologize for Twitter being super slow in many countries. App is doing >1000 poorly batched RPCs just to render a home timeline (sic)!"

Later, an Android developer named Eric Frohnhoefer tweeted that Musk's assessment of Twitter being slow was wrong. "I've spent ~6 years working on Twitter for Android and I can say that this is wrong (sic),” wrote Frohnhoefer. 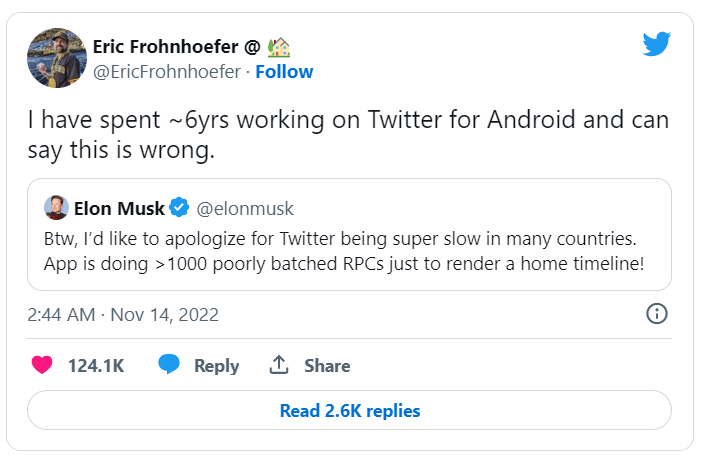 Following this, the Twitter CEO asked him, "Then please correct me. What is the right number (sic)?" and added, "Twitter is super slow on Android. What have you done to fix that (sic)?"

Before Eric Frohnhoefer could reply, another unidentified user wrote, "I have been a developer for 20 years. And I can tell you that as the domain expert here you should inform your boss privately. Trying to one up him in public while he is trying to learn and be helpful makes you look like a spiteful self-serving dev (sic)."

Replying to the same Frohnhoefer wrote, “Maybe he should ask questions privately. Maybe using Slack or email (sic)." That’s when another Twitterati tagged the billionaire, saying "With this kind of attitude, you probably don't want this guy on your team (sic)." 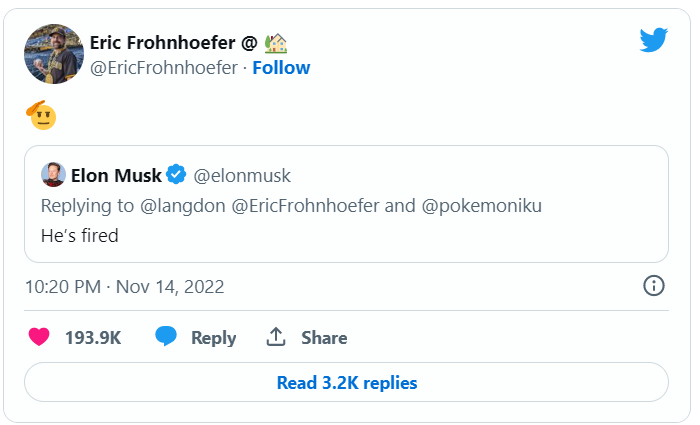 Soon after Musk took control of Twitter on October 28, he fired top executives of the company, including the CEO and chief legal officer. The billionaire also axed about 3,700 jobs or half of the company's workforce in a bid to cut costs.

Samriddhi Srivastava is working as Senior Associate- Content with People Matters. You can reach out to her at samriddhi.s@gopeoplematters.com.
NEXT STORY: After corporate hiring freeze, Amazon plans to lay off thousands
Also Read: IBM to lay off 3,900 employees in latest job cut
Also Read: Google to slash 12,000 jobs in biggest tech layoff in its history

Google to slash 12,000 jobs in biggest tech layoff in its history

Salesforce to slash 10% of its workforce worldwide