Unilever chief Paul Polman is to retire after a decade of leading the consumer giant firm. Polman’s departure came after a failed plan to move the firm's headquarters from London to the Netherlands.

The Anglo-Dutch maker of famous brands like Marmite and Dove soap will be headed from January by Alan Jope, the current chief of its huge beauty and personal care department.

Unilever Chairman Marijn Dekkers said Polman was an "exceptional business leader who has transformed Unilever, making it one of the best-performing companies in its sector, and one of the most admired businesses in the world."

Meanwhile, Polman in a tweet stated that he had decided to "step down from my role as CEO", adding: "It's been a great honour to lead this team for the past 10 years and together build a sustainable business that has made a difference to millions of lives." 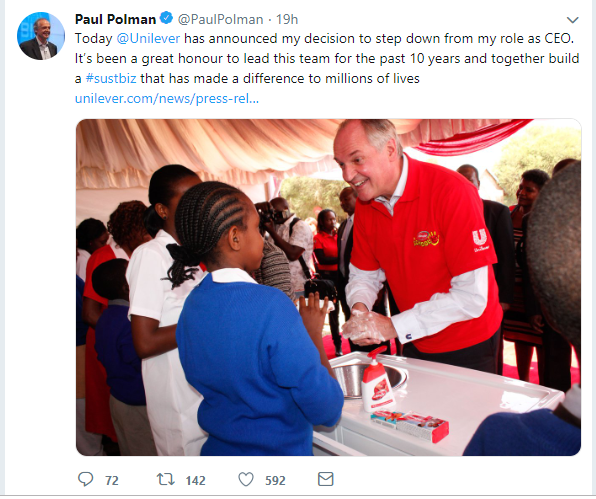 He added, “I have no doubts that I will be leaving the company in excellent hands. Under Alan's leadership Unilever is well-placed to prosper long into the future.”

Jope, who currently leads the firm's largest division and has been with Unilever since 1985, said it would be a "huge privilege to lead Unilever".

While Polman is due to retire as CEO on December 31 but he will stay at the company for six months helping Jope to make a smooth transition.

However neither of the two made any mention of the plan to move the firm's corporate base from London to the Dutch port city of Rotterdam.

Since its creation in 1930, Unilever has maintained a dual-headed structure and listings on the London, Amsterdam and New York stock exchanges. But in March Polman unveiled a plan to create a single structure for the company in the Netherlands.

The decision saw major opposition from key shareholders who thought that the plan would have ended Unilever's listing on the London stock exchange. The announcement of the move out of London was also widely interpreted as a blow to post-Brexit Britain. However, Polman’s plan fell through in October, casting a doubt on his position.

Shweta is working as an Editor with People Matters. You can reach out to her at shweta.modgil@gopeoplematters.com
NEXT STORY: Maharashtra approves 16% quota in jobs and education for Marathas
Also Read: Lenovo India announces leadership change for integrated operations and service delivery
Also Read: Nova Benefits onboards Bhagat Vachhaney as national head