According to the Monster Employment Index, a 16 percent year-on-year growth has been observed in the online recruitment activities in the month of February 2018, up from 12 percent in January 2018.

Abhijeet Mukherjee, CEO, Monster.com- APAC & Gulf said, “The job market looks positive with hiring trends moving positively in February. Globalization, technological advancement, and demographics are constantly re-shaping the fundamental nature of work and focus remain on re-skilling and upskilling employees in order to be prepared for the dynamism.

Home Appliance among other industries has registered the steepest growth with 59 percent increase in demand since last year. Matching this growth rate is another sector, Production, and Manufacturing, with an increase of 11 percent month-on-month online demand in the sector. Online demand in Retail saw a 24 percent increase in demand on a month-on-month basis; the steepest month on month growth among all monitored sectors. The sharpest annual decline among all monitored industry sectors is for Government/PSU/Defence (down by 37 percent). 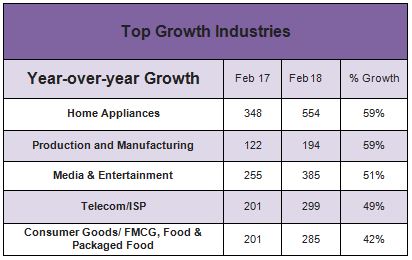 The year-on-year growth rate for IT - Hardware, Software has increased by 22 percent and for Telecom/ISP it has been up by 49 percent. However, the demand in BPO/ITES has gone down by 24 percent. Interestingly, each of the three sectors has witnessed a positive online demand trend on a month-on-month basis- IT - Hardware, Software grew by three percent, Telecom/ISP by eight percent and BPO/ITES by three percent.

Although BFSI remained one of the strongest sectors with a 34 percent increase in demand, however, there was no increase in e-recruitment activity in the sector between January and February. 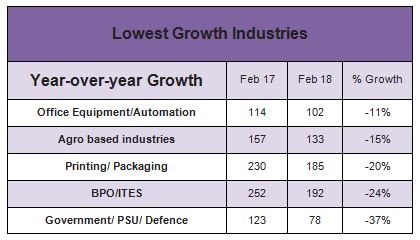 City-wise data shows that among all monitored cities, Kolkata recorded the most notable annual growth rate with a 45 percent rise in demand and Delhi-NCR saw the least growth among all monitored cities with an increase of only 1 percent. Other cities that witnessed annual growth in demand are Baroda (up by 37 percent) and Ahmedabad (up by 33 percent).